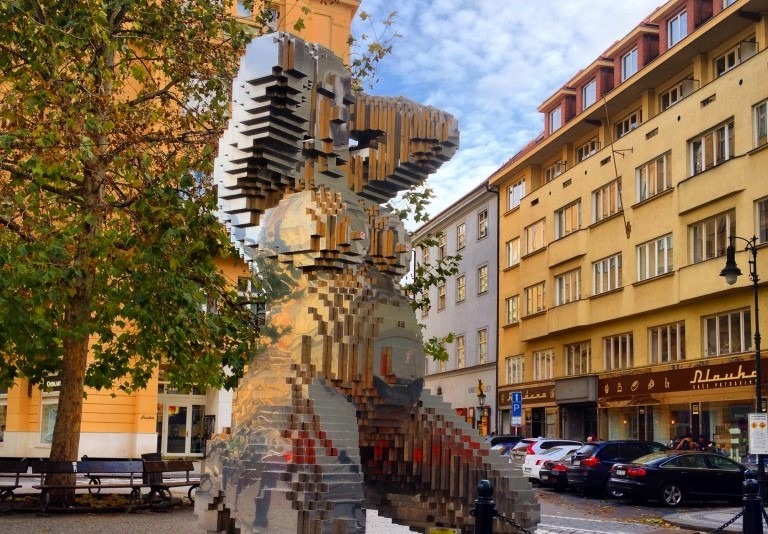 10 unusual sights to see in Prague

Prague is a magical city, no doubt about it. It will charm you from the get-go with its jaw-dropping architecture and well-preserved historic sights. There’s just something about walking across a nearly empty Charles Bridge at 2am when it seems like you have the city all to yourself. One of the reasons I love Prague is that it is a small city with a lot of hidden gems scattered throughout the centre and nearby districts. It’s actually pretty easy to get off the beaten path and avoid the crowds — and stumble across some… unusual sights. Here are 10 worth seeing that are odd, or beyond most guidebooks, or or just totally unique to Prague.

What’s a sojourn in Prague without a stop at a local beer garden? A wasted trip that’s what! Consider this: Czechs drink more beer per capita than any other country. Drinking beer and socialising is an integral part of their culture. Lucky for you, there are many places throughout the city. We recommend the tried and true Riegrovy Sady and Letná Beer Gardens, but also those with a much more alternative vibe like Containall or Tiskárna na vzduchu. Now go out and explore Czech culture with a nice buzz on!

David Černý is l’enfant terrible of the contemporary Czech art scene. He manages to piss people off with his artwork and causes others to burst out in laughter. Luckily, you can see a whole hell of a lot of his stuff around town: most visible and easy to find are his babies crawling up the Žižkov TV Tower, or his upside-down horse with St. Wenceslas in Lucerna Passage, or his In Utero piece where you can look inside a womb (above). MeetFactory should also be on your radar: a multi-purpose space started by Černý with non-mainstream concerts, art studios and galleries, rollerskating parties and flea markets. If you come across a weird statue in Prague, then it’s a safe bet that it’s Černý’s.

Loathed by some yet applauded by others. Whatever your opinion may be, the Žižkov TV Tower is a dominant part of the Prague skyline and is here to stay. At night, it’s lit up in white, red and blue, representing the colours of the Czech flag. It’s hailed as the tallest building and viewing platform in the Czech Republic, and a ride to the top provides you with a 360-degree pop-up-book view of the city. Word has it you can avoid the entrance fee by simply ordering a coffee in the café. While you’re there, don’t forget to check out David Černý’s babies crawling up the side.

Located in Holešovice, a former industrial area of the city, Cross Club is a hub of alternative culture and lively events like Prague’s street food festival. Even if you are not into the music pulsing out of the club that night, it’s still worth a proper exploration. Get lost in the weird interior with its mechanical contraptions and psychedelic lights — there is something eye-catching around every corner.

Located on the grounds of the often overlooked national monument of Vyšehrad — a place purported to be first settlement of Czechs in Prague — Vyšehrad Cemetery is one of the most beautiful and calmest places in the whole city. The idea for a national cemetery sprung up from the National Revival in the 1880s, when the Czech people mobilised and worked towards an independent state and revived their language and culture. Come and see the tombs of a very important group of Czechs, such as art nouveau artist Alphonse Mucha; Karel Čapek, writer and inventor of the term robot; and composer Antonín Dvořák. The art work and tombstone sculptures alone make the cemetery worth a visit. Check out the entire area of Vyšehrad while you’re there — no running into hordes of tourist here!

Once the site of the largest Stalin statue in the world — mockingly called the “Meat line” during communism — the metronome now inhabits the former dictator’s post from which he once looked out over the city. Located in Letná Park, the Prague metronome and the area surrounding it is a concrete playground. Skaters and other tricksters use the space for their acrobatics. Others simply drink beer and dangle their legs over the precipice, gazing out at Prague from their perch. The Prague metronome really has some of the best views of the city. While you’re there, check out Letná Beer Garden and the hipster summer bar Stalin.

“Sapa? But that’s in Vietnam,” you say. Well, you are right and wrong. Since the Vietnamese are the third largest group of immigrants in the Czech Republic, you’ll find “Sapa,” an enormous, authentic Vietnamese market pulsing and thriving just like those in Vietnam. Sapa is great for a day trip, and an ideal place to experience Vietnamese culture and life outside of Vietnam. Get lost in the stall land. Buy a bunch of crap you don’t really need. Have a hearty bowl of pho bo. Stock up on fish sauce, green tea, seafood, coriander and fresh tofu. Sapa is a world onto itself and worth the short bus ride to the outskirts.

The district of Prague 7 is without a doubt one of the most dynamic and creative areas of Prague. Creative locals along with the progressive local city government have been working hard to turn this district into a mecca of art and alternative culture. You can find places like Parelelní Polis, boasting the world’s one and only café to solely accept bitcoins; or Vnitroblock, a former industrial space revamped to include a store full of unique, local design products, a café, gallery and the smallest cinema in Prague. And that’s only the tip of the iceberg: Prague 7 has an array of cool bistros, bars, galleries, theatres and parks.

If you visit just one graffiti abode in Prague, then Těšnov should be it (yes, go see the John Lennon Wall too!). It’s one of Prague’s so-called legal walls, places where graffiti artists can paint day or night — legally. Of course, it isn’t as much of a rush when the cops aren’t after you, but at least it’s a spot where these artists can create and show off their skillz without fear of a criminal offense. The pieces at Těšnov change on a weekly basis and often times are made by the best Czech crews. It’s a quite large, centrally located space too, so you’ll be sure to get your fill of Prague graffiti.

Get your graffiti fix at Tesnov | Photo by Amanda Bell

A current trend in the Czech capital is the re-purposing of former industrial spaces into multi-functional cultural centres. Over the past few years, there has been a proliferation of such spaces which have under one roof art galleries, alternative theatres, bars/cafes, concerts, fashion markets and more. You can’t go wrong with a stop at Kasárna Karlín, MeetFactory, Vnitroblock, Továrna or Radlická-kulturní sportovna.

This article originally appeared on PragueOffTheMap.com and has been reproduced with permission.

Unlock the hidden secrets of Prague (and there are many, trust us!) on a Prague tour that takes you through offbeat neighbourhoods or to the best beer halls in the city. Our team of dedicated, passionate Prague locals are dying to tell you all about how awesome their home is, and with packed itineraries you’re sure to find a tour to suit your tastes and interests. Prague awaits… let’s go!