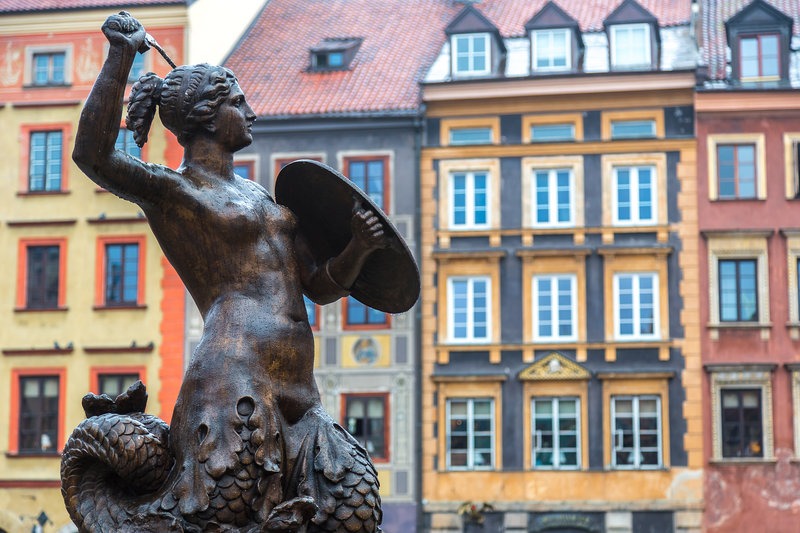 Even if you’ve only got one day in Warsaw, that’s still enough time to cram in a fair amount of sightseeing. Thanks to easy access from the airport to the city centre, you can get downtown with plenty of time to see the sites and dine on dishes like pork knuckles and dumplings. Here’s our ultimate guide to filling a mere 24 hours in Warsaw.

Start your day with a trip to Vistulan Boulevards, located on the west side of the River Vistula. With stone benches and beach chairs on the sand, this is a good place to visit in the early hours, when it’s quiet (later in the day, you could be hard-pressed to find a seat). Go for a morning walk or rent a bike to make your way over to the boulevards. Once there, find a spot and watch how Warsaw wakes up.

If you’d rather get there via metro, you can take line M2 on the subway, and get off at Centrum Nauki Kopernik station. The very first thing you’ll see at the top of the stairs is the Mermaid Statue that is the unquestionable symbol of Warsaw — and a great photo opportunity!

Once the sun is high, head for breakfast at one of the many fancy bars, cafes and restaurants in the neighbourhood. We recommend SAM, which is located close to the boulevards and serves various breakfast styles: classic, American, English or vegetarian. You’ll get your energy for the rest of the day!

Once you’ve fuelled up on breakfast, take the bus over to the Warsaw Uprising Museum. You can hop on the number 105 bus at the Biblioteka Uniwersytecka stop (located near SAM), and it’s about a 20-minute ride. Your ticket will just cost PLN 3.40 (less than USD 1). Get off at the Muzeum Powstania Warszawskiego stop.

The Uprising Museum is one of the most important museums in Warsaw, containing original photographs, videos and audio recordings, artificats and other items pertaining to the Warsaw Uprising that happened in 1944 during WWII. A walk through the museum will enlighten you to how life was during the German occupation of Warsaw, as well as its aftermath. If you want to understand the history of Warsaw better, you shouldn’t miss it.

While you’re there, watch the 3D movie The City of Ruins, which features a simulation flight of the Liberator plane over the destroyed city in 1945. You’ll be able to appreciate how heroic the effort was to rebuild the city from rubble, and have a much deeper understand of modern Warsaw.

Grab lunch at nearby Folk Gospoda, or The Folk Inn, which is one of the oldest restaurants in Warsaw. Located in the very heart of the city, it’s about a 10 to 15-minute walk from the museum (and you’ll want that walk to work up an appetite for the food to come!). They serve traditional Polish dishes (that taste just like homemade!) — things like tartare from the best Polish beef tenderloin, traditional Polish pork chops, and plates of dumplings. Just be aware that the lunches can be huge portions and rather heavy — all according to local tradition!

After lunch, spend some time exploring both the Mirow and Moranow districts. Before 1918, these areas were just poor suburbs, but during the interwar period they were gradually built up with large houses. Unfortunately, most of the area was razed to the ground after the Warsaw Ghetto Uprising and the Warsaw Uprising in 1944. Long after the war, the two districts remained a rubbish heap until a large residential area with socialist-realist buildings was planned and built there.

First, Mirow. Walk down Chlodna Street, which, during the German occupation, was an important exit road for the “Aryan” side of Warsaw, dividing the ghetto into two parts. Walk down to see Keret House, an art installation described as the narrowest house in the world, measuring 92 centimetres at its thinnest point and 152 centimetres at its widest. Finish with a visit to Mirow’s Halls, which was constructed between 1899 and 1901 and was the largest commerce building in Warsaw until WWII). Immerse yourself in the vibrant and colourful world of seasonal vegetables and fruits, and hunt for local treats like kielbasa (Polish sausage) or farmer’s cheese.

Afterwards, continue to Muranow. You can take a tram from the Hale Mirowskie stop — any of the trams will take you to Metro Mlociny or Metro Marymont; get off at Anielewicza (the third stop).

In Muranow, see the POLIN Museum of the History of Polish Jews. It’s located on the site of the former Warsaw Ghetto and features a multimedia exhibit about the Jewish community that flourished in Poland for a thousand years until its annihilation in World War II. If you’re limited on time, at the very least just see the building, a postmodern structure made of glass, copper and concrete.

From there, visit Krasinski Park. This garden emerged in the second half of the 17th century and today you can walk in the shade of ancient tree specimens like ginkgo biloba, caucasian wingnut, black walnuts and Turkish hazel. After you go through the park, you’ll see the Supreme Court and the Warsaw Uprising Monument. Since you’ve already visited the Warsaw Uprising Museum, you’ll understand why this monument is so important to the Poles. The monument has been described as “the most important monument of post-war Warsaw” and is one of the city’s landmarks.

Dinner time! Go for a traditional Polish meal at Kompania Piwna; it is said that the heart of Warsaw Old Town beats there (how’s that for a glowing review?!). It’s located in the historical surroundings in the immediate vicinity of the Barbican. It’s famous for its classic Polish dishes like its legendary pork knuckle and crispy pickled cucumbers, and fresh beer, of course. Not a booze lover? No problem; sparkling water is served from a siphon like in the good old days.

If you’re only in town on a quick layover, no worries — there’s still enough time to see some of the sites, as the city centre is only a 25-minute ride from the airport via bus or train (take train S2 or bus 175 — just follow the signs for train/bus). You’ll need about five hours (including time to go back through airport security) for exploring. Before you venture out, download the app Jak dojade, which translates to “How will I get there?” The app is in Polish but is very simple to follow even if you don’t speak Polish. It’ll show you an up-to-date schedule; or just use Google maps to navigate you. There is a free wi-fi at the airport.

If you’re in Warsaw on a morning or afternoon layover, go for an historic walk through the most important moments in Polish history. Start out under the Palace of Culture and Science. If you don’t know the city yet, it’s useful to familiarise yourself with this Warsaw landmark (and the highest building in Poland), which was a gift from the Soviet Nations. Whenever you feel lost, just search for its characteristic shape on the skyline. From there, go for a walk through Plac Grzybowski and Prozna street to catch a glimpse of pre-war Warsaw and imagine how the city was once a centre of Jewish trade and culture. As you wander, be sure to check out the brick walls of the houses along Prozna, as you’ll still see some bullet holes — mementos of the battles during WWII and the destruction of Warsaw’s Ghetto.

Continue walking through Ogrod Saski (Saxon Garden), which is the oldest public park in the city and was one of the first publicly accessible parks in the world (since 1727). Here, under the only surviving part of the Saxon Palace, you’ll find the Tomb of the Unknown Soldier, dedicated to those who have given their lives for Poland. The changing of the guards takes place daily on the hour, every hour.

From here you’ll see part of the Royal Route, Krakowskie Przedmieście, with historic buildings, churches and manor-like houses, every one carrying stories. If you’re into history, explore this street with an eye to how it shows the relative peace that came after 1918, when Poland gained its independence. Or, if you’d rather concentrate on the modern face of Warsaw, this is a great place to just people-watch, fill your stomach with good food, sip a coffee in a restaurant garden, or shop for souvenirs. This street is all you need before going back to the airport.

If you’re in Warsaw on an evening or nighttime layover, then go out for Polish craft beers! After dark, locals head to Nowogrodzka Street, where there are plenty of places eat, drink, talk with new friends and just enjoy your (brief) time in Warsaw. If you’ve got time to explore a bit more, then walk over to the nearby roundabout with a palm tree (yes, we have one in Warsaw!), which marks the beginning of Nowy Swiat (New World Street). Along there you’ll find not only bars, cafes and restaurants, but also the variety of boutiques. This is the street that rarely sleeps!