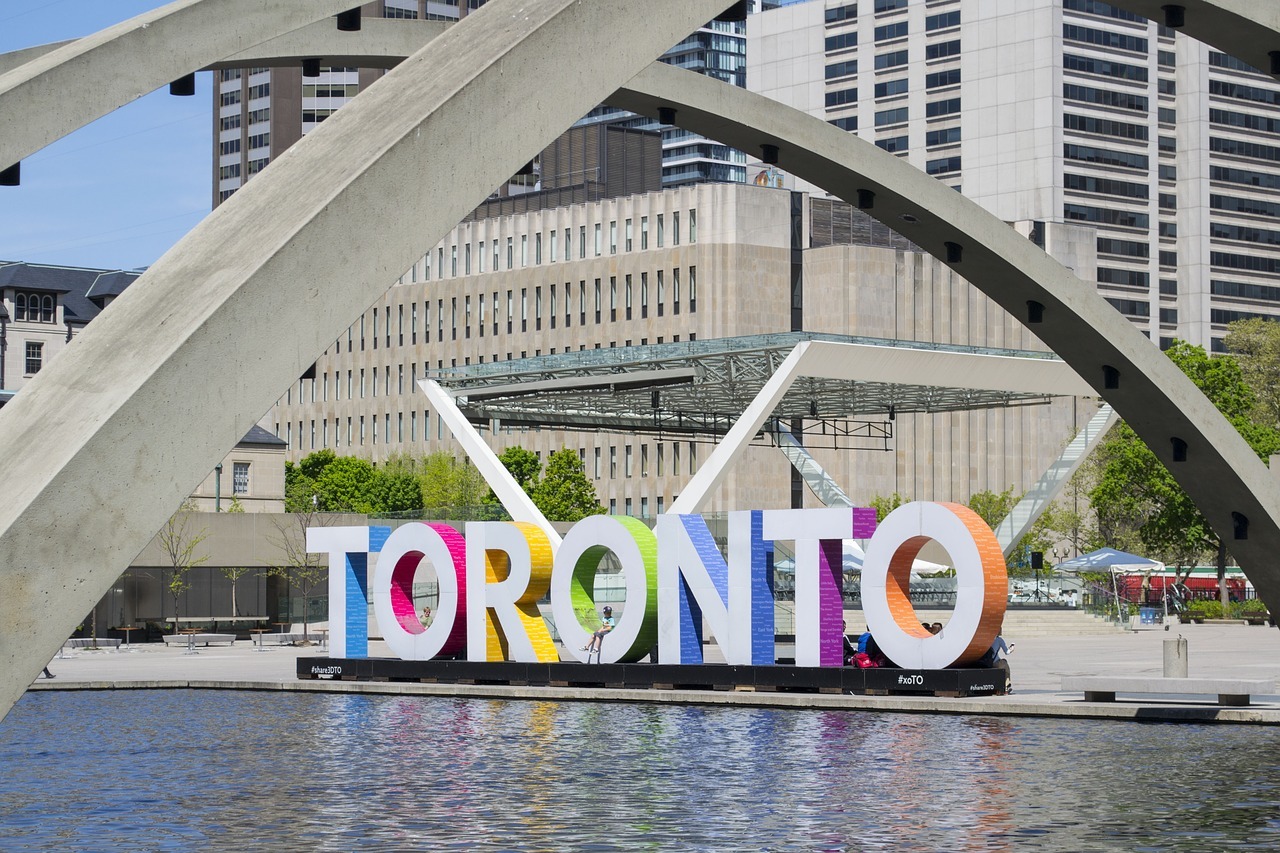 Ready to tackle Toronto in a short visit? Even though there’s a seemingly endless stream of things to see and do, you can still get a great sense of the city in just 24 hours. From markets and breweries, to parks, essential landmarks, and some of Toronto’s best-loved neighbourhoods, our local Toronto tour guides know the absolute best things to check out on a short trip to Toronto.

Start your visit to Toronto with a stop at St. Lawrence Market, nice and early when it opens. St. Lawrence Market was declared by National Geographic Magazine as the best food market in the world and is home to the official sandwich of Toronto. Make that sandwich your breakfast by heading to Carousel Bakery for their famous peameal bacon sandwich. Celebrity chefs like Emeril Lagasse and Anthony Bourdain, along with people from all over the world, have tried and loved the deceptively simple but delicious sandwich. Psst: We also feature the sandwich on our When Pigs Fry walking tour. If you need a dose of caffeine, head across the street to Balzacs Coffee and grab a great local coffee. Tuck into a bacon sandwich | Photo by Toronto Urban Adventures

After fuelling up with breakfast and coffee, take the short 15- to 20-minute walk down to Lake Ontario for a scenic cruise of the harbour with Mariposa Cruises. Alternately, you could take the ferry across to the Toronto Islands and back, depending on what you’re in the mood for. Lake Ontario is one of the very impressive Great Lakes and has shaped Toronto in a way little else has. The Harbourfront and the Toronto Islands are a breath of fresh air and a nice change from the hustle and bustle of Toronto’s financial district, which is just a few minutes away.

After taking in the lake and harbourfront, head up to Kensington Market. Toronto is one of the most diverse cities in the world and Kensington is one the best neighbourhoods to show off that diversity. Explore on foot to check out some of the unique and awesome local restaurants in the area, grab lunch, and spend some time visiting the cool eclectic shops and street art in this multicultural neighbourhood. We also offer an amazing walking tour of this area. Kensington Market is about a 40-minute walk, a 15-minute bike ride, or a short trip using the subway and streetcar from the Lakeshore. In the afternoon, spend your time exploring Queen Street West, which includes stops like Graffiti Alley, Trinity Bellwoods Park and Bellwoods Brewery. Queen Street West was selected by Vogue as one of the hippest neighbourhoods in the world. It has amazing vintage clothing stores, antique shops, record stores, independent boutiques, cafes, pubs and tattoo parlors — it’s the epitome of cool Toronto! Rush Lane, aka “Graffiti Alley” is nearby and where you can see some of the best and most amazing street art that Toronto has to offer.

Keep on wandering down to Trinity Bellwoods (one of Toronto’s 1,600 parks) and mellow out (or participate in a drum circle). Hang with the locals, play some frisbee or just lay in the grass, read, relax and soak up the sun. After that, head to Bellwoods Brewery and try some amazing craft beer. If beer is not your thing, there are plenty of great coffee shops in the area like Jimmy’s Coffee and Early Bird. Queen Street West is a 10-minute walk, five-minute bike ride, or short streetcar ride from Kensington.

If the Toronto Blue Jays are in town, nothing in the summer beats taking in a baseball game at Rogers Centre. But if that’s not an option (or you’re just not a baseball fan), there’s plenty to keep you busy during an evening in Toronto. For dinner, you can grab a great casual meal on the Ossington Street strip, or for something a bit fancier head to Yorkville and try some of the  fine-dining restaurants there.

After dinner, you can check out some great sketch comedy at the famous Second City in the Entertainment District, or stand-up or improv comedy at Comedy Bar and follow up the show with some drinks in the area afterwards.

We also recommend board game cafe Snakes and Lattes (open until midnight most nights), where you can have a drink and play games, followed by exploring nearby Little Italy or The Annex neighbourhood (depending on which location you’re at).

For music lovers, check out some great live jazz at The Rex Jazz Club, or rock and other styles of music at The Legendary Horseshoe Tavern or The Cameron House. All the options listed are within a 20- to 45-minute walk from the Ossington Street and Queen Street West area and accessible by bike or streetcar.

For travellers on a short visit, we recommend having a layover that will allow you to spend two hours in the city centre, and another two hours for travelling to and from the airport.

The best way to get from the airport to the sites is by taking the the new UP Express train, which gets you from Pearson International Airport (YYZ) to downtown in 25 minutes. Smaller regional Billy Bishop Airport is located on the Toronto Islands and can be easily accessed by foot or transit from the western part of Toronto’s harbourfront in minutes.

If you want to see Toronto in two hours in the morning or afternoon, make your way to St. Lawrence Market for food and drink, then walk or transit through the downtown core to check out City Hall and the famous Toronto sign at Nathan Philips Square. These are iconic locations that provide great photo opportunities and the chance to get a feel for “Canada’s Downtown.”

If you’re in Toronto for an evening or nighttime layover, make a reservation to visit the CN Tower and skip the ticket line. It’s open until 11pm and will give you an amazing view of the city on a short visit. There are a multitude of restaurants, shops and bars a couple of blocks north of the tower in the Entertainment District.

Ranked as one of the globe’s most multicultural communities, this “city of neighbourhoods” offers up every flavour of international flare you can think of. Explore this cultural diversity and a few of the local hot spots (as well as beer and bacon!) with a Toronto city tour.

What lockdown has been like in Philadelphia
Ultimate Guide to Being Vegan in Philadelphia
Lonely Planet Best in Travel 2020: What not to miss according to locals
The 10 Most Romantic Tours in North America
Best Street Food in Detroit: Khana