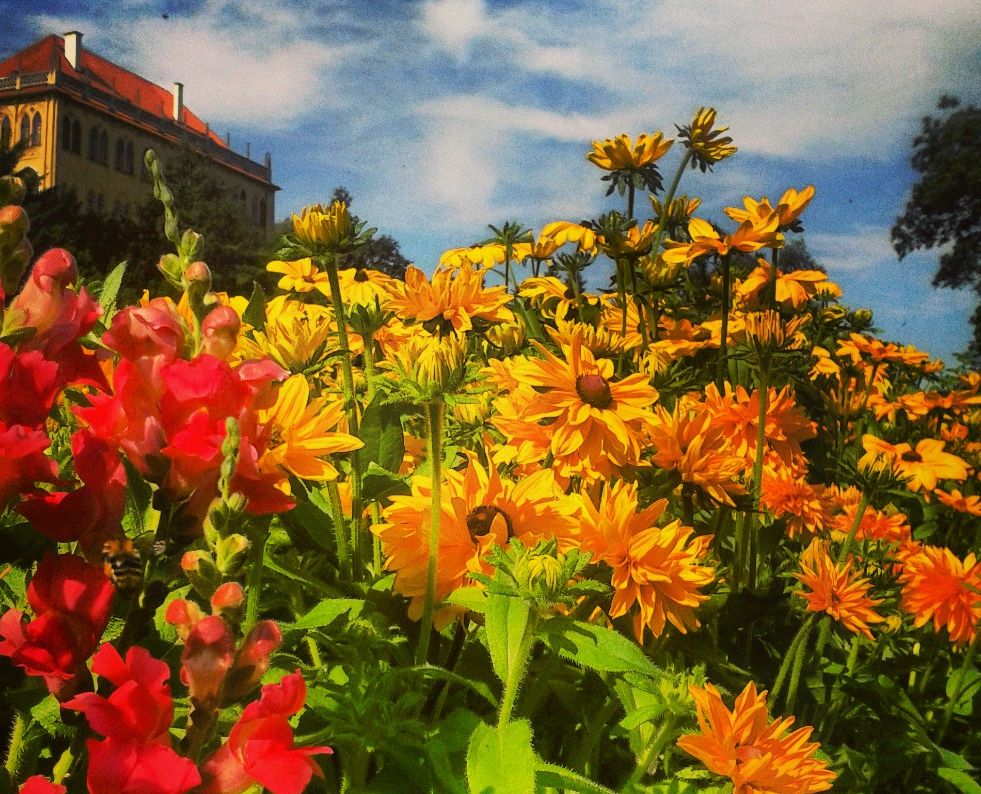 A local’s guide to Stromovka Park in Prague 7 (Holešovice)

No one knows local life like our guides. That’s why we’ve asked them take us around their favourite ‘hoods and offer their insider tips on seeing the city like a true local. If Stromovka sounds like your kind of place, local Prague guide Silvie and her team can show you around the park and surrounding district on their Prague Parks and Views tour.

I was born in the region of the North Moravia, which is a short distance from the Polish and Slovak borders, and as a child I would go to visit my great-aunt, who lived in Letna, in the district of Prague 7. She lived near the incredible parks of Stromovka and Letenske sady, and almost every weekend we walked from Letna through the parks and around the Vltava River.

Stromovka is a former hunting preserve of kings who resided in Prague, located near Prague Castle and dating back to the 13th century; however it only developed into what it is today during the Renaissance period and the reign of the Habsburg Emperor Rudolf II, who decided to choose Prague as his main seat instead of Vienna.

The park is 95 hectares, which makes it the largest garden in Prague. You will find lots of green meadows, ponds and hidden secret places — where our children like to play hide and seek when we go walking through the grounds! There’s even a train that passes through Stromovka.

In and around Stromovka you can go roller skating, run, have a picnic with friends, or “go for a ‘one,'” as we say in the Czech Republic — go to the pub for a beer, but one beer usually becomes more. I remember my great-grandfather, my grandfather, my father and my uncle all going for ‘one’ and then coming home three hours later. Beer is part of our culture (although today some are more inclined to drink wine — but really, I think everyone is drinking everything!).

My top 7 things to do in Stromovka, Prague 7

1. Have lunch at Vozovna Restaurant

One of my favorite places to eat in Prague is the Vozovna Restaurant. Get off at the Vystaviste tram stop, and just past the Planetarium you will find a playground, which connects to the restaurant. It’s a great place in the middle of the park, with delicious food and a peaceful, quiet atmosphere.

2. See the stars at the Planetarium

The Planetarium Praha has a great year-round program, and while most events are in Czech, there are some English-language showings available. If you love stars and the universe, you have no choice but to pay a visit here!

3. Explore the buildings of the Exhibition Grounds

The main building of the grounds is the Industrial Palace, a beautiful Art Nouveau building made from glass and steel. The entire Exhibition Centre was built for the General Land Centennial Exhibition in 1891. That’s the same exhibition that gave Prague its own small version of the Eiffel Tower. But you’ll have to venture to a different park in order to see it — it’s on top of Petrin Hill.

Stay at the Expo Grounds and you can take advantage of different exhibitions that take place, or cool festivals like Harley Davidson Days! There are a lot of Harley Davidson fans in Prague. In fact, the world’s first Harley Davidson Club was established in Prague in 1928! My family always visits the park on Harley Davidson Days, which are held regularly in September. It’s a great event where you can see the oldest Harley motorcycle, as well as the newest.

What’s more, July 2018 will be the 115th anniversary of Harley Davidson in Prague. So if you’re a motorbike fan, you should book your flight now!

Right behind the Industrial Palace is the Singing Fountain, built by our Czech version of Einstein: František Křižík. The fountain was also built for the 1891 General Land Centennial Exhibition, with the goal of creating a design that was completely unprecedented. Water sprays from 3,000 nozzles, and within the pool there are over 1,300 coloured lights, which are used to project an image onto the water curtain, combined with breathtaking laser effects.

I first saw the singing fountain when I was 14 years old. It was 1989, the year when the Communists ruled for the last time, and there was nothing — shops were empty, everything was grey. And then there was this fountain. I loved Mozart, and when I saw his A Little Night Music connected with water that moved precisely in rhythm, changing colours, it was like magic or a miracle.

Unfortunately, you may have to wait a bit to see the fountain sing again, as it was closed in November 2017 and its future remains unclear. Let’s hope for the best, but check their website before going for a performance, to avoid any disappointment. 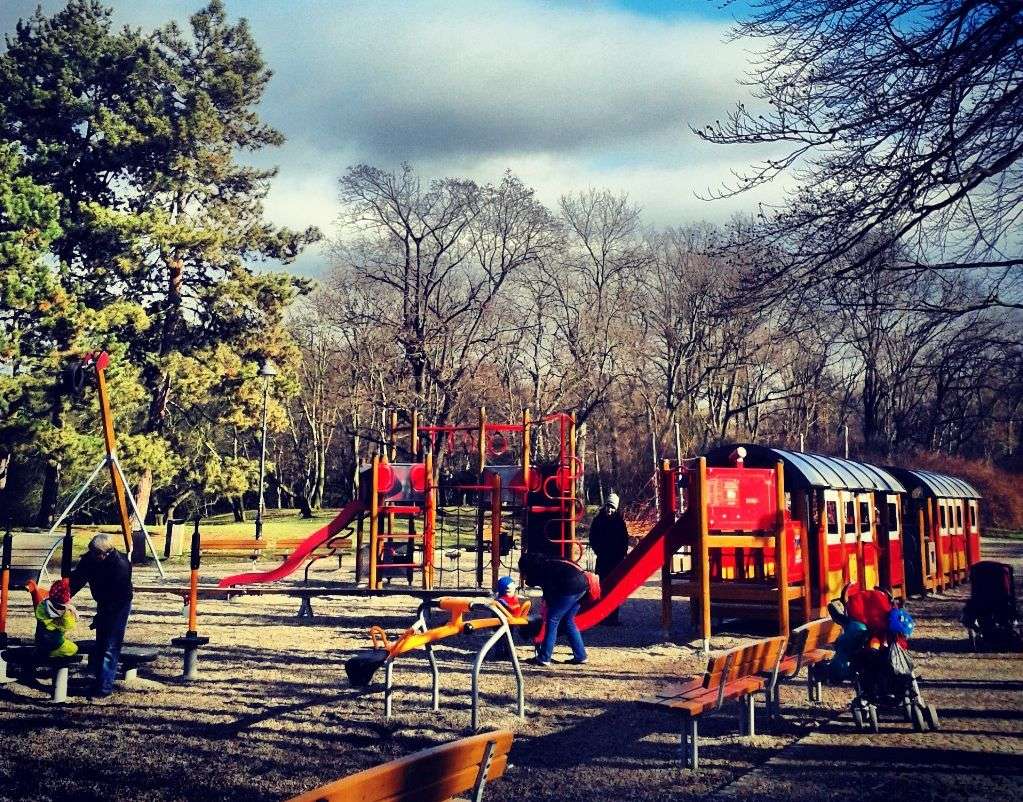 6. Ride the rides of the amusement park

Once a year my family takes a whirl on the rides at Matejska Pout amusement park. We all buy sweet cotton candy and the kids enjoy the rides (I personally can’t manage many, but of course, the children have no problem!). You’ll find the entrance right next to the Exhibition Grounds.

7. Discover the art at the Trade Fair Palace

One stop in front of the Exhibition Grounds are the huge buildings of the Trade Fair Palace. This palace is part of the National Gallery and for those of you who love art, you must make a stop here. There is currently a wonderful exhibition of the Chinese artist Ai Weiwei, called Law of the Journey. I’ve already visited it and it’s great.

How to get to Stromovka, Prague 7

Stromovka and the Exhibition Grounds are best reached by trams 5, 12, 14, 15 and 17, which all go to Vystaviste station. You can also take metro line C to Nadrazi Holesovice station. From there, it’s about 15 minutes on foot or one tram stop (lines 12, 24 and 17 to the Vystaviste Holesovice stop).

I studied economics at university and worked for various international corporations before becoming a tour guide. In economics, I had achieved relatively high career posts, but it wasn’t fulfilling, and my great loves since childhood had been history, architecture and connecting with people. After my children were born, I decided to take a guide course and started to host delegates from other parts of Europe who came to Prague. I found the work to be fulfilling, enriching, entertaining and enjoyable. I had a great feeling about it, and I saw that this feeling was mutual.

I started working for Urban Adventures in 2017 and I lead the Prague Discovery tour, which is a six-hour walk through Prague, combined with an excellent lunch and a boat trip under the incredible Charles Bridge. Now, I share my love for the beautiful city of Prague. I am simply happy I can live, work and raise children in what is, for me, the most beautiful city in the world. It sounds like a fairy tale, but I think I’m allowed to live my fairy tale!