Blog > Ancient mysteries of the My Son Temple ruins 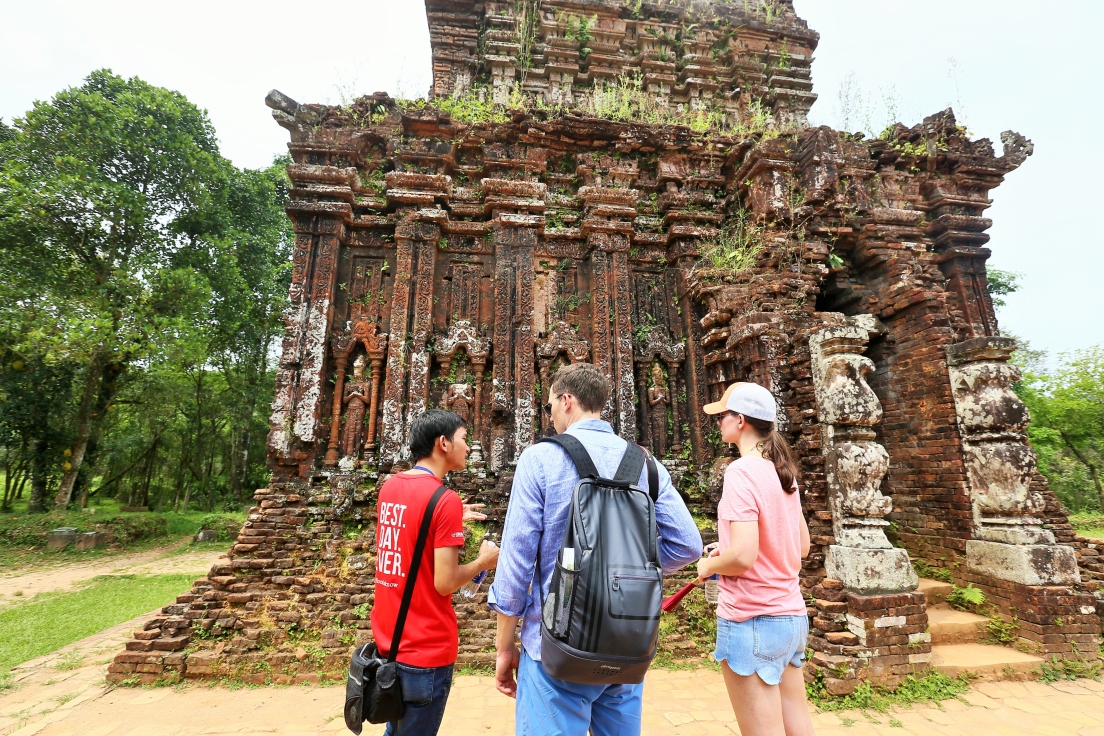 Ancient mysteries of the My Son Temple ruins

Tucked deep within the lush jungle that surrounds the quaint village of Duy Phu is a valley of crumbling ancient ruins unlike many others in Vietnam. Unlike most of Vietnam’s houses of worship, the royal My Son temple complex wasn’t erected in honour of Lord Buddha. Mahayana Buddhism became popular amongst the Vietnamese during the 2nd century, yet during the 4th century the ethnic group known as Cham began to build the My Son complex in honour of Shiva, a principal Hindu deity. Shiva is the creator, destroyer, and preserver (Champa kings believed that Shiva was their protector).

The Hindu temple complex is framed by its namesake mountains. Mỹ means beautiful and Sơn means mountain (pronounced Me Sun). This small range of mountains is the source of the sacred Thu Bon River which flows through My Son and out to the South China Sea through the port of Hoi An. Perhaps the geography explains why the Cham people chose this remote and hard-to-reach locale to erect their massive place of worship. The Cham people were indeed inspired by nature as they constructed the temple grounds by precisely placing monuments strategically in a two-kilometre wide semi-circle in accordance to where the sun would shine, starting behind the head of Lord Vishnu in the early morning.

Originally the cluster of Hindu temples was built of wood in the 4th century by King Bhadravarman. By the 6th century, the complex was completely destroyed by a raging fire–it’s unknown what caused the flames. In the 7th century, King Sambhuvarman restored the temple complex with handmade fired bricks that were expertly laid without any binding material. How did this ancient society build bricks without mortar? The sophisticated engineering technique of the Cham builders remains a mystery.

The temples, altars, and waiting rooms at My Son are adorned with sandstone carved in bas-reliefs that depict legends of Hindu mythology and spiritual symbolism. Throughout, there are many lingas, a cylinder phallus that represents Shiva and masculinity. Lingas are placed in the centre of a circular carving of a womb known as yoni which represents Shakti, the symbol of femininity and Shiva’s wife. Together the symbolic depiction of Shiva and Shakti represent fertility and creation.

Before entering the temples, Hindu monks would cleanse their hands and feet with the water that flowed over the linga and yoni. Cham kings were not allowed to enter the Hindu temples. They’d sit for three days in the waiting rooms at My Son to practice deep meditation while the Hindu monks prayed for the Champa Kingdom from within the temples.

The holy complex of over 70 structures was abandoned when the Vietnamese defeated the Champa Kingdom. My Son was reclaimed by the forest and lost from the 14th century onwards until the French uncovered the temples in a state of despair in 1889.

Excavation of the neglected site went on for decades, but conservation efforts stopped during the Vietnam War. The communist Viet Cong were defending northern Vietnam and set up a military base at My Son. The religious site was devastated after a week of carpet bombing by the southern Vietnamese and their American allies. Only 17 of the original monuments survived.

In 1999, over a century after the French rediscovered My Son, UNESCO honoured the mystical Hindu grounds as a World Heritage Site. Modern technology hasn’t been able to recreate the extraordinary Cham brick building methods. Unlike the ancient bricks, the replacements aren’t seamless and have already begun to crumble. How did the ancient culture build in a way that today’s masterminds can’t recreate? My Son is a holy place full of secrets that may never be known.

My Son may not compare in grandeur to Cambodia’s Angkor Wat, Thailand’s Ayutthaya, Myanmar’s Bagan, or the Balinese Hindu temples of Ubud, Indonesia, but it’s fascinating to visit and learn about the unique heritage of the Champa Kingdom. Visit with a knowledgeable Urban Adventures local guide to gain insight into the mysteries of the Champa Kingdom.

Want to do explore the ancient My Son temple ruins yourself? Hop on the My Son Discovery Tour to learn more about the mysteries of the Champa Kingdom.