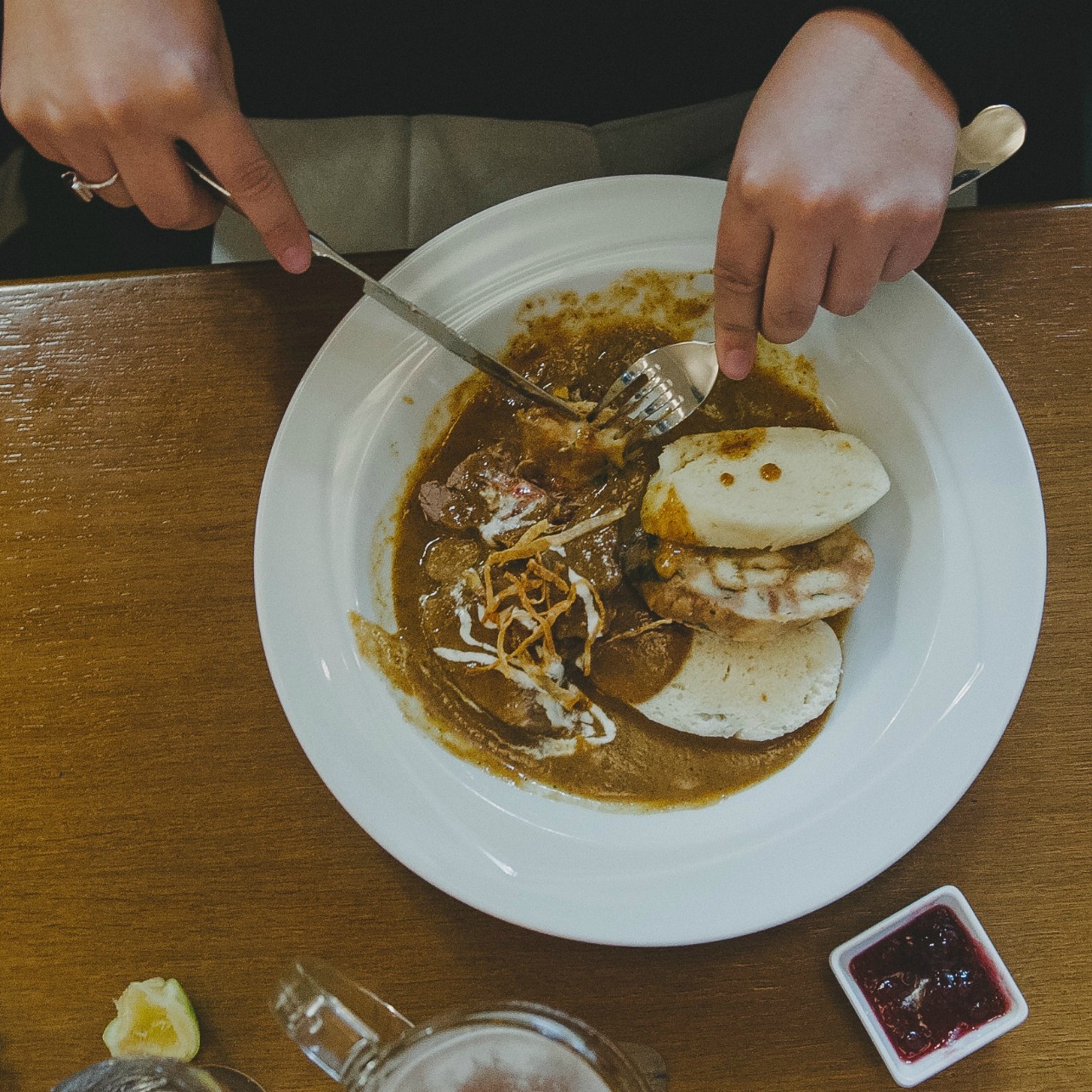 Czech cuisine is one of the heartiest cuisines out there, and this beef and beer goulash recipe, inspired by our Urban Adventures team in Prague, will certainly stick to your ribs. Perfect for cold nights in with friends, it pairs well with good wine and good conversation. For best results, you’ll need to marinate overnight, but trust us, the wait is worth it.

But before we begin, there’s something very important you need to know. Do not attempt this recipe with your stomach empty, nor with your stomach full. The former will make you rush through what should be done slowly; the latter will leave you without inspiration (“Why am I cooking, I’m not even hungry”).

What to do then? Have some nice finger food on hand, something that fills you up a bit, but keeps you on the edge of hunger. Besides, if you’re serving this up for a dinner party, you’ll want some nibbles to keep people out of the kitchen while you cook. And of course, whatever snacks you have should be something you can pair with beer or wine (after all, who would cook without a drink in hand?!). Plus, that beer or wine will unleash your creative cooking powers, or enable you to be a bit braver with the spices.

Also note that I tend to cook without recipes, so you’ll want to vary the amounts of ingredients, depending on your flavour preferences. Taste often as you cook, and add the spices in phases (I usually do at least three), just like the skilled brewers do with their hops. Certain spices take on different flavours and aromas depending on when they’re added. For example, when black pepper is added at the beginning, it leaves a somewhat acidic taste, but when it’s added at the end, it releases that nice black pepper flavour. Fine spices like curries, Indian cumin, and hot paprika or pepper powder tend to lose some flavour if they are cooked for too long. 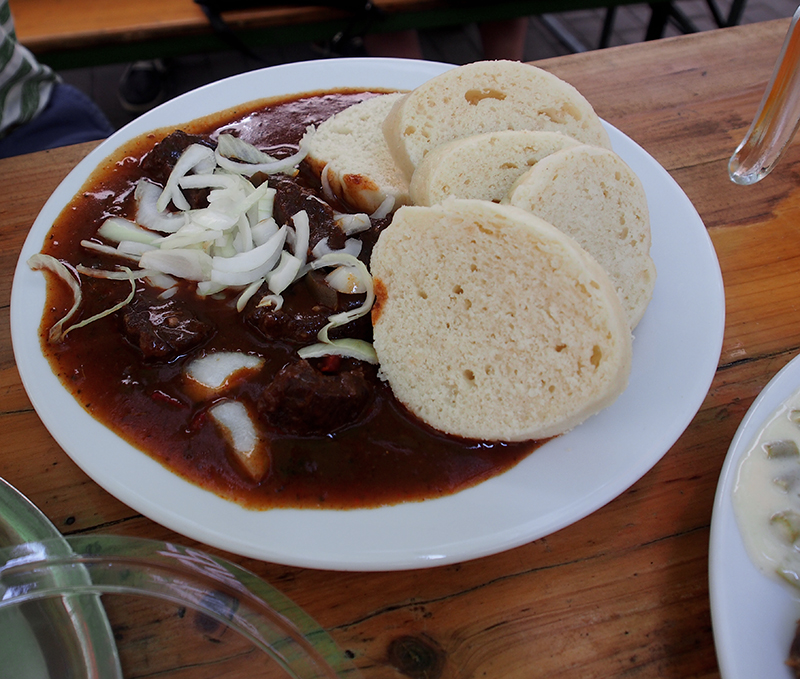 Marinate the meat overnight. Cut it into large bite-size chunks (remember that the meat will shrink up a bit while cooking) and send them to a beer spa, made up of olive oil, balsamic vinegar, beer, and crushed garlic. Mix well and toss again in the morning.

Take the meat out of the fridge about 1.5 to 2 hours before you start cooking. You may also want to pat the meat “dry” before you fry it.

Fry the onions, garlic, chili, and tomato purée in oil (adding to the mix in this order). Cook until the point that the purée has just been heated a bit.

Add some water and a can of crushed tomatoes (good quality ones — Italians know how to do them!). Imagine that soon the chunks of meat will be diving in, and they don’t want to feel like they’re in the ocean — they want another spa. That’ll help you to estimate the amount of water. Add a pinch of salt to the water and your first round of spices: a few bay leaves and pinch of allspice.

Fry the meat in oil and butter in a very hot pan, so that the heat seals the meat. Often, people will throw the meat into the stew at this point, but that’s a mistake. Instead, toss the seared meat with a sprinkling of salt and white pepper and leave for 15 to 20 minutes. I know this is terrible, having to wait, but it’s a good time to pour more wine or beer and go brag to your guests about the amazing meal you are cooking.

Back into the kitchen to taste the tomato, onion, and chili base. Is it something you would jump into yourself? If so, then so would the meat and beer! Add the chunks of meat and one bottle of light beer and one bottle of dark beer. Let all that boil for about 45 minutes, stirring occasionally. No need to boil at high, but it should boil.

Add some more water, salt, a bay leaf, and allspice. Taste again — the flavours should be starting to come together. Add more crushed tomatoes. No need to boil it, but there should be some “life” on the surface. Remember to stir often. This part takes about 2 hours. Alternate between having the lid on and off.

At this stage, people will inevitably start entering the kitchen and asking when it’ll be ready. Use whatever skillful tactics you have to keep them happily waiting.

Time for the carrots and parsnips to join the party! Continue cooking for another 2 hours, and add the second bottle of dark beer. After this there should be quite an explosion of flavours. See if there’s anything you want to add more of: chili? tomato purée? Stir some more.

Next, chop and boil the potatoes (with peels is totally fine, it’s goulash with attitude, remember). Boil them until they’re soft when you poke them with a fork.

Time to taste the goulash again (you’re about 15 minutes away from serving now). You can add any herbs you wish — I usually go with parsley and rosemary. Add your second small bottle of light beer. Is it now tasty and quite thick? Good, job! I sometimes add little bit of vinegar at the very end as well.

Serve the goulash with a side of boiled potatoes, topped with butter and freshly cut chives. Maybe with some salad, too — never a bad idea. Or, instead of potatoes, you could of course get really traditional with classic Czech dumplings.