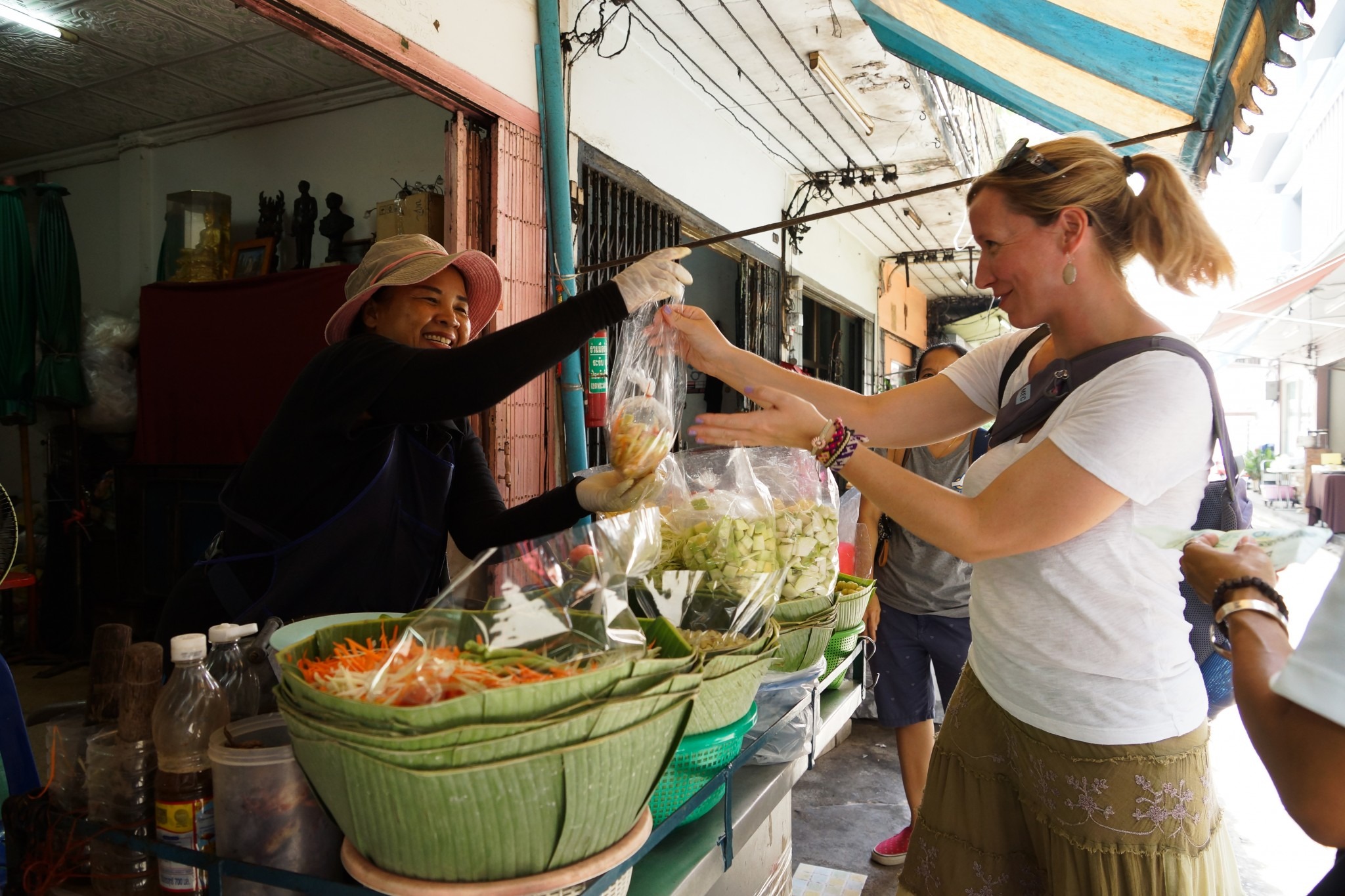 Nu, the owner of a small fruit stall down an alley off Samsen Road in the Thewet Market area, has a name that translates to “mouse” or “rat.” Not that she’s anything like a timid mouse — her Nu Tum Pollamai stall isn’t known for serving the cheapest tum pollamai (mixed fruit salad) in town, but she doesn’t care. That’s because she’s also known for using only the best, freshest ingredients, and she knows that there’s nothing wrong with good quality demanding a price.

“Some places use shrimp that is too salty,” says Soon, my Urban Adventures guide for the day. “Nu uses slightly more expensive shrimp, but it’s better and less salty.” Same thing goes for Nu’s sauce, which strikes the perfect balance of tartness. “Many places put in too much lime,” adds Soon.

Nu’s tum pollamai consists of guava, apple, pineapple, green mango, tomato, steamed corn, and shredded carrot, tossed in a sauce made from fish sauce, palm sugar, chilies, peanuts, and the aforementioned lime and dried shrimp. It’s a recipe she’s perfected over the 20 years that she’s been in this same spot, renting a tiny piece of pavement in front of a home on Soi Wong Phakdi. The owners let her keep her stall there overnight, so she doesn’t need to cart the entire thing in daily when she opens up shop at 6am.

Nu is typically sold out of her salads by about 2pm, after the lunch time rush has grabbed up freshly mixed and pre-packed takeaway kits (she bags the peanuts and shrimp separately from the sauce so they’ll keep their crunch until it’s time for you to dig in). And even though she has no chairs or tables set up in front of her stall, the people keep coming — if they’re not taking away, they stand eating their salad in the middle of the alleyway. Because when you’re serving up some of the best street food in the city, you don’t need anything more than the cart in front of you.

How to find it: Near Wat Noranarth Soontarikaram, on the south side of Samsen Road. Look for Soi Wong Phakdi, which is a (mostly) pedestrian alley next to Top Charoen Optical, between Krung Kasem Road and Soi Satharanasuk.