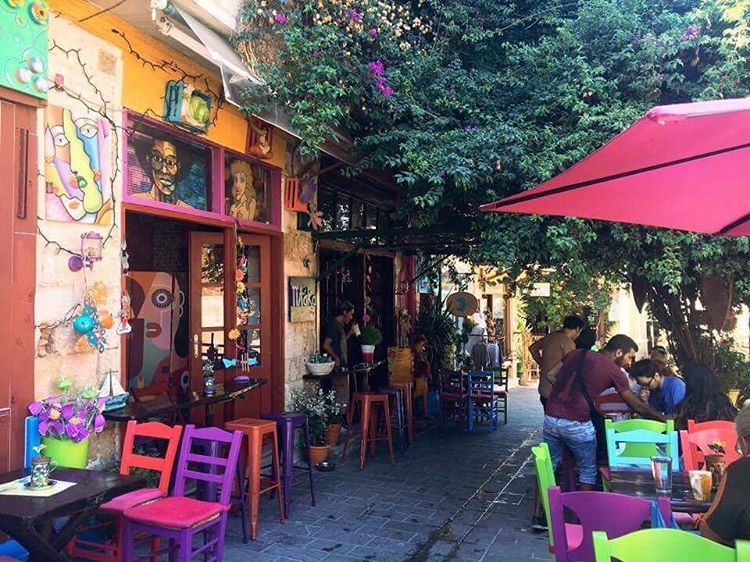 Chania, the second largest town on Crete, is known as one of the most beautiful areas on this island. This is the type of place you say you’ll spend a few days in and then (whoops) you’ve stayed a week. That’s because Chania (also spelled Haniá) lends itself well to slowing down and unplugging. It’s not a big place, but it is a picturesque one, and a destination where one of your activities for the day could simply be slowly sipping wine at a tiny open air café, rubbing shoulders with locals as you watch the world go by. Ready to go? We have everything you need to know before you go and while you’re there.

Getting to and from CHQ

The easiest and most economical way to get to and from Chania airport is by bus. You’ll find the bus stop right outside the terminal building and the trip to central Chania should be about 30 minutes. You can purchase a ticket on the bus and it will cost EUR 2.30.

If you want to take a taxi, there’s a taxi stand outside of the airport and a ride to the city centre should cost about EUR 24.

One of the best ways to get around Chania is to explore on foot, especially the narrow, winding streets and alleys of the various neighbourhoods of the old town. But buses are also a good option for getting around the city. Cost varies according to where you’re going and how far, but expect to pay anywhere from EUR 1.20 to 2.50. Note that it’s cheaper to buy your tickets from kiosks and vending machines versus directly on the bus. Buses run from approximately 6am to 11pm.

Things to do in Chania

The first thing you’re going to want to do in Chania is visit the Venetian Harbour and Old Town. You’ll feel as if you’ve stepped back in time as you wander the narrow alleys and pedestrian streets that zigzag through the area and its surrounding neighbourhoods. You’ll want to take your time getting lost among the plethora of colourtul caf&eaecutes, bakeries, tavernas, and shops, or even just do some people watching with a glass of traditional Cretan wine. Make sure to walk along the harbour’s sea wall to catch a glimpse of the Venetian Lighthouse. You can’t go in, but you can admire for afar and snap a few pictures of one of the oldest lighthouses in Greece.

Each summer during July, August, and September, visitors and locals can experience Cultural Summer, which is a series of music and theatrical performances throughout the city. Many of these performances take place at the theatre in Eastern Trench, at the Public  Garden, at the Conservatory of Venizelos, and at the Park of Peace and Friendship, along with other events in various neighbourhoods.

Chania and its surrounding area are known for having some seriously beautiful beaches, so you’re going to want to plunk yourself down on a stretch of sand at some point during your stay. Many of the beaches are equipped with sunbeds and umbrellas, and depending on where you go, many beaches are also close to cafés and taverns. One of the best to check out is Agii Apostoli, which is easily accessible by hopping on a city bus or taxi (around EUR 7-8).  Water quality here is excellent and you’ll have access to three bays featuring soft, sandy beaches. Another good option is Chrissi Akti, with its shallow water and close proximity to the city. Nea Chora is the closest beach to the city centre and can be accessed on foot.

Looking for more things to do? Urban Adventures offers day tours in Chania and beyond, all led by local experts that will give you a taste for local life on Crete:

Street Stories of Chania
Experience the real Crete with a walk through one of its most picturesque cities. Chania is a kaleidoscope of different elements: ancient ruins, strong local culture and traditions, and delectable cuisine (and yes, you’ll get to taste some!). Escape the tourist traps and dive into secret corners and local neighbourhoods — each stop has a story to tell!

Bohemian Sunset Tour
If wine is your thing, you’ll be glad to know there’s plenty of it in Chania! As well as good food, strong spirits, and mythical tales hidden down back alleyways. We’re checking it all out and more after sunset on this tour that visits the spots only #localsknow.

In Focus: A Night with the Gods Stargazing Tour
Do you know your Zeus from your zodiac? We’re diving into ancient Greek mythology and astronomy (along with some ancient recipes) on this star-studded, food-fuelled adventure! Crete is one of the best places for stargazing, and we’re going to pair the sky with our stomach as we learn to read the constellations before digging into a traditional Minoan meal.

Gourmet Trail of Rethymnon
Taste your way through the old city of Rethymnon on this evening food tour that uncovers the hidden spots not found in guidebooks. Eat and drink the best products of the region, talk to local vendors, and find out why Crete is a foodies’ paradise!

The Best of Far West Crete
Head to Sfakia on the far west side of the island, where towering mountains, deep gorges, tales of adventure, and local cuisine await. You’ll get it all on this full-day Crete tour that combines everything you could want from a great Greek day: hiking, cooking, wine-tasting, cheese-sampling, storytelling and more.

Chania on the big screen

The city scenes of the 1964 film Zorba the Greek (the classic movie in which a stuffy English writer lands on Crete) were filmed in Chania, making it a good pre-trip watch to get in the mood for your visit.

Take a listen to Psarantonis Antonis Xylouris, a Greek composer, singer, lyra player. The lyra is a traditional bowed string instrument of Crete, dating back to medieval times.

Get in the mood for a visit to Chania by picking up a copy of Freedom and Death by Nikos Kazantzakis, a story of Crete in the late 19th century.

The Mediterranean’s fifth-largest island, Crete is a remarkable mosaic of stunning gorges, rugged mountains, and beautiful beaches. With Europe to the north, Asia to the east, and Africa to the south, Crete has always been at the crossroads of civilisations, having been visited, conquered, and fought for, all while retaining its unique character and traditions.