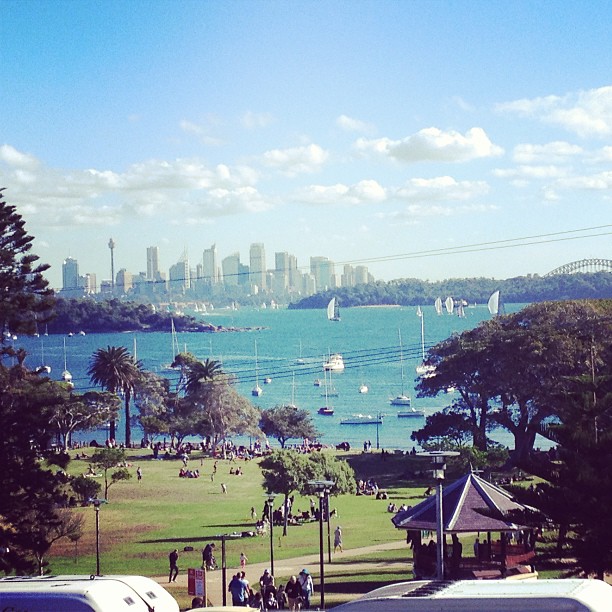 The Complete Guide to: Sydney Travel

So you’re travelling to Sydney – smart choice! This guide will give you everything you need to know about Sydney travel, from getting to and from the airport and around the city, to the best Sydney books to read, and the cool local spots you should check out.

Getting To and From SYD

Airport Link is the most economical way to get to and from the airport with direct trains running to the City Circle train stations: Central, Museum, St James, Circular Quay, Wynyard and Town Hall. If you plan on going further than those stations, you will need to purchase an additional ticket to the suburban station.

If you prefer to take a taxi, grab one from the designated taxi ranks located outside each terminal.  It’ll cost you approximately $50 to the city, $60 to North Sydney, or $100 to Manly.

Your other option is to take a NSW Sydney public bus from Terminal 1 or 3 to Bondi Junction Station (Route 400) for $4.60 one way. Free Downtown Shuttle: Route 555 is a free shuttle around Sydney’s Central Business District (CBD). It operates in a loop in both directions from Central Station to Circular Quay via George Street. There are also free shuttles in Parramatta and Wollongong.

Public Transit: Sydney has a wide range of public transit options available including bus, train, light rail, and ferry. The Transport Info site is the best hub for planning your trip and connections. Tickets are available for pre-purchase at public transport facilities, retail outlets like convenience stores, and on some buses provided it’s not during peak hours.

MyMulti pass gives you unlimited travel on all modes of transportation and are an economical option if you plan to use multiple transit options in a day or week.
Day Pass: $23
Weekly Pass: $63

Taxi: You can hail a metered taxi anywhere in the city, but allow extra time at 3pm and 3am as it is more difficult to get one during changeover times.

Walk: Although Sydney is a large city, it is well worth exploring on foot. You’ll get a feel for the different neighbourhoods and stumble across hidden gems. It is safe to walk around, but take common sense precautions with your personal safety and belongings. Things To Do In Sydney

Rugby is a national treasure and beloved by the people of New South Wales. From February to July, it’s a Sydney tradition to head over to catch the Tahs (NSW Waratahs) in a rugby union match at Allianz or ANZ Stadium. Tickets range from $25-65 and can be bought online on the Waratahs website or at the stadium box office.

Vivid Sydney is the city’s most illuminating festival and one of our favourite relatively unknown festivals in the world! Sydney comes alive at night during this spectacular 18-day festival in May and June. Featuring amazing light installations, music, and interactive artwork, many of the events are free and it is truly phenomenal to behold.

Another event worth checking out is the Sydney Festival. With theatre, music, dance, talks, visual art, and family events, this festival has it all! It takes place every summer in January and has cultural events ranging from free to over $100.

The parade at Sydney’s Gay and Lesbian Mardi Gras is a sight to behold! Every February, hundreds of thousands spectators line up along the route to check out the spectacular floats, costumes, and show-stoppers. Sydney On the Big Screen

Two Hands is a great movie to get you the mood for our Kings Cross – Crime and Passion tour. It showcases an interesting side of Sydney and Kings Cross, starring the late Heath Ledger in one of his earliest roles.

With the lyric “As the Manly Ferry cuts its way to Circular Quay”, ‘Reckless‘ by Australian Crawl is the best soundtrack for a visit to the harbour.

Need some reading material for the long flight to Sydney? ‘Mr Sin: The Abe Saffron Dossier’ by Tony Reeves is a definite page turner! Written by an investigative reporter, this true crime novel is the story of one of Australia’s most notorious and powerful crime figures.

For a look back at Australia’s history, check out ‘1788: The Brutal Truth of the First Fleet’ for a story of courage, short-sightedness, tragedy, and resilience. Never before or since has there been a social experiment as bold as the founding of Australia as a British Colony. What’s On in Sydney

There are a few awesome resources to keep you in the loop of what’s going on in and around Sydney. Two Thousand is an ultra hip guide to “things locals love”. And between What’s On and Timeout, you can find every major and minor highlight happening in Sydney from music to nightlife, theatre, art, festivals, and more.