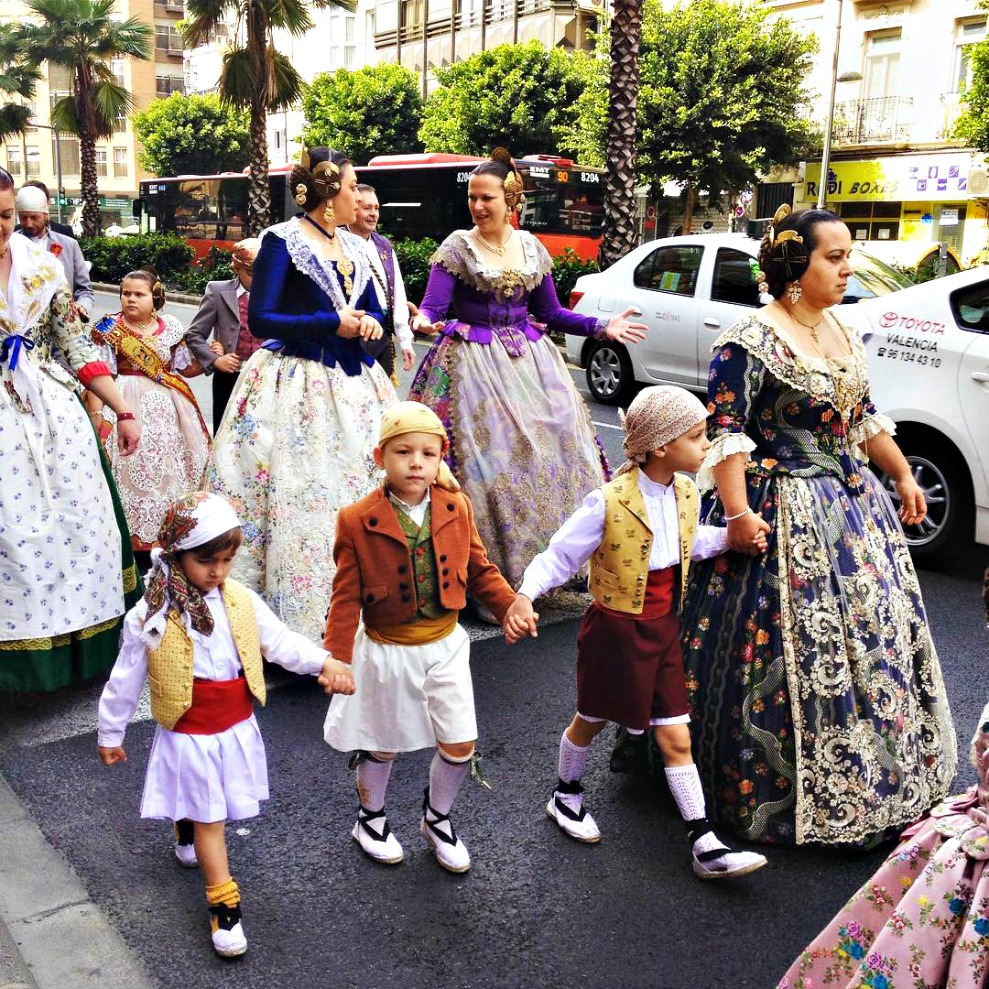 The complete guide to: Valencia travel

So you’re off to Valencia — good choice! Navigating any new city can be difficult, so let us make it easier for you. We’ve created a guide to the city — everything you need to know about getting there, getting around the city, the best things to do, what to eat, what to check out, and we’ve even thrown in a few Spanish and Valencian lessons here and there! Two official languages are spoken here: Español (known as castellano) and Valencian (a Catalan dialect). You’ll often find official buildings, landmarks, and street signs referred to by two different names (with slight variations). I know it may get confusing but here’s a few directional basics to help you get around a little easier:

Here are some basic greetings to score you some brownie points with the locals:

Now, here are a few of what I would call essentials that will really impress the locals:

Getting to Valencia via train

If you’re coming from neighbouring cities like Madrid or Barcelona, trains or coach buses are the more economical options (with trains being the fastest!).

Valencia has two train stations. The main station is Estacío del Nord (North station), located within the heart of the city centre (the Art Nouveau building is located next to the Bullfighting Arena — Plaza de Toros de Valencia). A metro station called ‘Xàtiva’ is just outside.

Located less than two kilometres away is the secondary train station, Valencia Joaquín Sorolla. This is the arrival station if you are taking the high-speed AVE or EuroMed trains from Madrid or Barcelona. This station’s metro stop is Joaquín Sorolla.

To travel between the two train stations, you can hop on the free shuttle bus that is operated by the train company Renfe. The service operates between 6:15 AM and 11:30 PM from Mondays to Saturdays, and on Sundays from 7:15 AM, every 10 minutes. At Estacío del Nord, the shuttle bus stop is located to the side of the train platform, while the stop at Joaquín Sorolla is right outside the train station. Train tickets can be purchased online at the Renfe website or at the train station.

Estación de Autobuses is the main bus station located less than four kilometres away from the city centre. There are a few companies that operate bus services to different Spanish cities. Tickets for the Madrid-Valencia service can be purchased via the Groupo-Avanza website, and tickets for the Barcelona-Valencia service can be purchased via the ALSA website.

Getting to and from the airport

Valencia Airport is located nine kilometres west of the city centre. A taxi ride to and from the airport should cost about €20 each way (only take metered taxis!).

Taking the metro from the airport to the city centre is quick, easy, and economical. From the station underneath the airport, the train on Red Line #3 or Green Line #5 will take you to Xàtiva station in approximately 20 minutes (Xàtiva being the city centre station). The fare will cost less than €5 per person.

There are several ways to get around our beautiful city!

Bikes: We are an eco-friendly community here in Valencia. There are tons of bike lanes that take you everywhere! If you’re here for a week, try out Valenbisi — a convenient bike-sharing service with 275 kiosks all over the city. Just purchase a short-term card at one of their automated terminals, check out a bike on the spot, and off you go! Simply return the bike at the next Valenbisi kiosk you see.

If you only want a bike rental for a few days, there are plenty of friendly rental shops around the main tourist spots with shiny rides waiting for you!

Walking: We think this is best way to see the sites — especially the cluster of landmarks within the city centre (and it’s eco-friendly too!). So put on those comfortable shoes, soak up the local atmosphere like a sponge, interact with the locals, and more importantly, walk off all those calories so you can indulge in even more delicacies! You are on holiday after all!

Metro: Our underground metro service is pretty handy for accessing sites outside of the city centre. Simply determine which zones you are travelling to/from using the coloured numbered lines. Single journey tickets start at €1,50.

Trams: If you see the trams around the city, it’s not a bad option for getting around. It’s a small system, but it’s well integrated with the metro and bus networks. Operating on Lines 4, 6 and 8, single journey tickets also start at €1,50.

Buses: Taking local buses is easy — partly because of this online trip planner. Operating times may vary based on season (the last bus typically leaves around 10:15 PM) so consult the handy planner or ask the driver.

You can purchase tickets from the bus driver or any tobacco shops (called tabacos) and news agents. Single journey tickets cost EUR 1,50, or get a rechargable card for multiple journeys — you’ll have free transfers between buses during the first hour of your journey.

Taxis: Radio Taxi Valencia is the most commonly used taxi service. You can even book a ride online. If you do flag one in the streets, look out for the white taxis and always ensure that the meter is running before starting a trip!

You may want to consider the Valencia Tourist Card, which covers most transportation in the city and offers discounts to certain entertainment venues, restaurants, and historical sites. They are available at all Tourist Information Offices (one is at the Plaza del Ayuntamiento).

Things to do in Valencia

There are just so many fun events you can experience while you’re in Valencia, but here are a few we’ve compiled to get you started! This type of clothing is usually worn during Las Fallas

Fallas is the biggest annual festival that’s on every Valencian’s social calendar (even those who have moved away return for it!). It is a celebration to commemorate Patron Saint José of Valencia. Over the years, it has evolved into almost a month-long celebration even though the main week of festivities is from March 15-19. We’re not lying when we say that you’ll get no sleep — there are daily parades with marching bands, spectacular all-day firework displays, crazy fiestas, and street exhibitions of giant cartoon-like monuments (also called fallas) dotting every city corner. It all concludes on the final day with big bonfires and the burning of these wooden monuments (and even more fireworks!). It’s one big Valencian fiesta that everyone should experience at least once in their life! For more info, check out our guide on everything you need to know about Fallas! 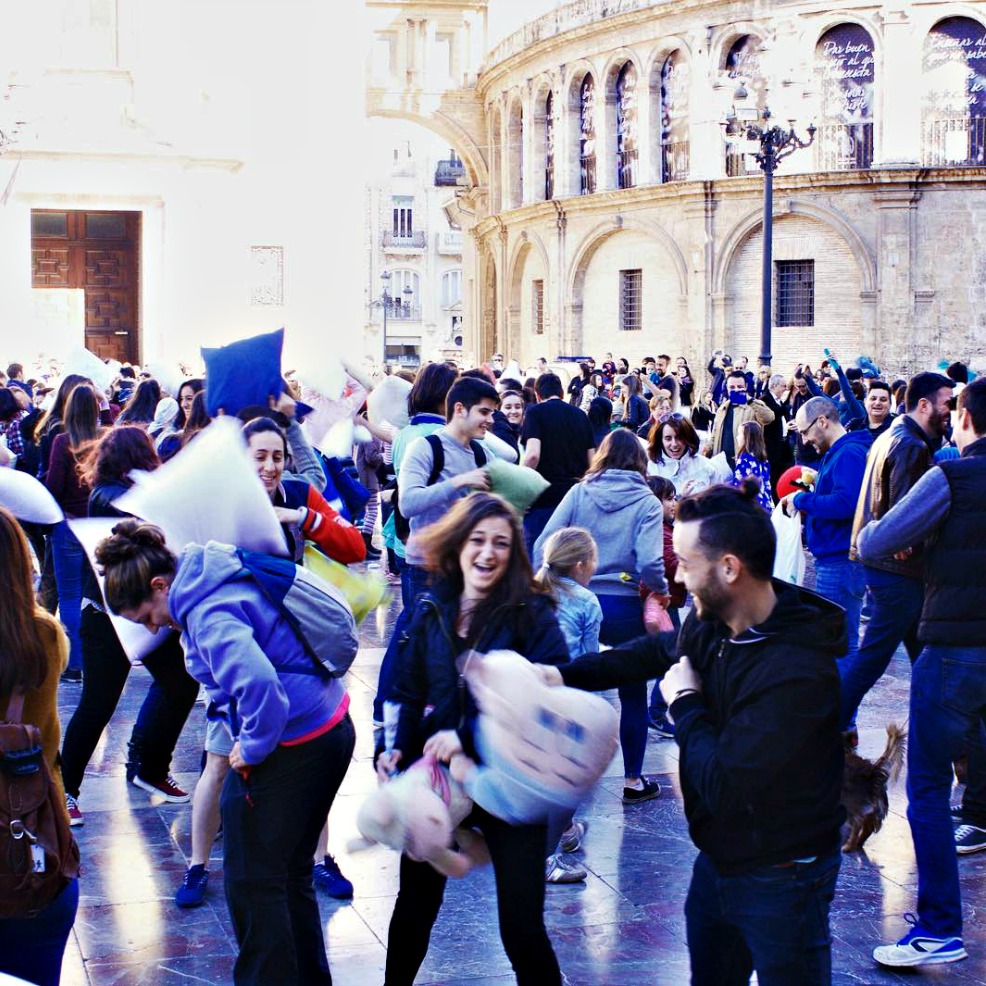 Who wouldn’t want to take part in a massive pillow fight?

Visit us in the spring! There are usually a bunch of events going on after Easter. This slew of events helps drag people out of their winter clothes to get out and enjoy the weather. If you feel like flying kites, there’s a festival for that down by the beach (Festival del Viento). If you wanna release some tension on complete strangers, check out the International Pillow Fight day. Or join the locals for a boozy afternoon at the Gastronomic Mostra de Vins Food and Wine Fair (it’s celebrating its 28th year) at the Turia Gardens. Try ALL the food!

Music fans unite! Valencia’s largest music festival, Festival de les Arts, happens yearly in June where Spanish indie bands rock out at the cool City of Arts and Sciences, along with food, arts, and design activities — it’s always a sure hit with everyone! Every year on June 23, thousands of Valencians descend upon the local beaches to celebrate Noche de San Juan, known as Midsummer’s Day to commemorate the longest day of the year. Join in on the bonfires, dancing, paella-cooking, and even some moonlight swimming!

The Valencia Jazz Festival in July is always a treat for all music fans! They always bring in a great mix of both Spanish and international artists, and host them at the Paula de la Música, our state-of-the-art concert hall close to the City of Arts & Sciences. The view from the Arts & Science district is stunning!

Raise your hand if you’ve heard of the tomato throwing festival! (I’m sure you raised your hand!) Come in late August if you want to be a part of the action at the famous La Tomatina festival. It all goes down gooey and red in the small Valencian town of Buñol. Tickets typically go on sale in April — get yours early!

Looking for more things to do? Urban Adventures offers day tours in Valencia and beyond, all led by local experts that will give you a taste for local life:

Valencian Treats and Tastes
Food, glorious food! Valencia may be famous for its paella, but that’s just one flavour in this full-on, taste bud-tingling gastronomical heaven! Skip the rice and hop on this Valencia food tour that lets you sample a wide selection of traditional and local treats, from horchata to jamón to even artisan chocolates. Then, fill up even further with a grand finale of tapas and wine!

Street Art in Old Valencia
Oranges, paella… and street art? Yes! Didn’t you know? Valencia is bursting with creativity, from wall murals to politically charged graffiti, making the city feel like an open-air museum. Wander the cobbled streets and hear the stories behind the city’s booming street art scene, with pit stops for a local snack and delicious local brews.

Valencia on the big screen

How about some Valencian Jota to get you in the holiday mood? With Roman, Moorish, and Iberian influences, this traditional folk song and dance will get your feet tapping (or maybe even dancing!) like no one’s watching… The craftsmanship that goes into all the clothing is absolutely beautiful

Many famous writers have left their mark here. One of the greatest writers of all times, Ernest Hemingway, called Valencia home for several years in the 1920s — a place that inspired a few of his best works such as Death in the Afternoon, For Whom the Bell Tolls, and The Dangerous Summer. Want to retrace some of Hemingway’s steps? Check out our Things to Do in Valencia blog.

Another person not to be ignored is Vicente Blasco Ibáñez. Ibáñez is one of the best-selling Spanish novelists of all-time, born and bred here in Valencia. His most famous book, Cañas y Barro, captured the beauty and realism of life in Valencia’s Albufera region in the early 20th century. His book is a must-read, although only available in Spanish.

What’s on in Valencia?

LoveValencia is a trusty online resource for what’s hip and happening around town (similar to Time Out Magazine). The event calendar is only in Spanish, but that’s nothing a little Google Translate won’t fix! You can still access the site’s English webpages, which gives a comprehensive run-down on touristy stuff that you might want to check out.

This little guy’s pillow is even bigger than him!

Get social with us

We want to connect with you! Follow us on Twitter at @Valencia_UA and like us on Facebook for all the latest Valencia updates. Oh and don’t forget to follow us on Instagram at @valenciaurbanadventures. Why? Because we’ll show you how us locals like to have fun in the city and because we’re always around town posting about our adventures, so if you want to know what’s happening in real time, we’re the perfect people to follow!