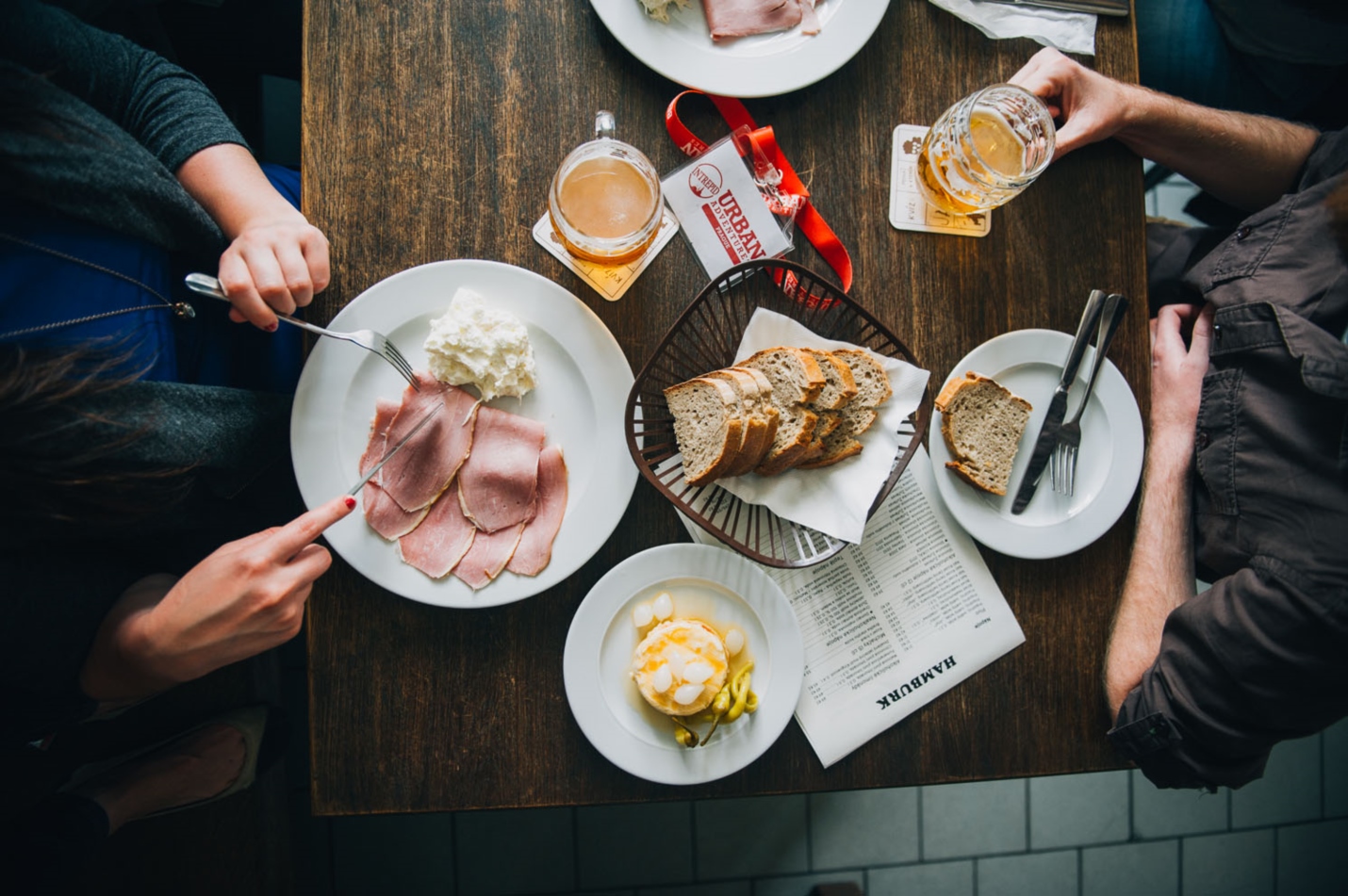 While you’re likely to find Asian fusion in Denmark or pizza in Poland, if you want to travel like a local (and we know you do), a great start is knowing some traditional foods in the destinations you visit. The following is a list of foods with a rich history that have stood the test of time; foods with deep ties to the culture and the ways in which a country has developed over time. These foods encourage us to learn more about a place, well beyond museum visits and guidebooks. If you’re curious about some of the best-loved local foods across Europe, we have got you covered.

It’s not easy to pick one specific dish that could represent the cuisine of the Czech Republic in all of its variety. In fact, we have a whole range of unique foods, all of which could compete for the status of a national dish. But we think most people would agree that vepřo, knedlo, zelo is an appropriate representation of the Czech culinary scene.

The literal translation of vepřo, knedlo, zelo is “pork, dumplings, cabbage,” which is quite a telling name. To be even more specific, this truly Czech delight consists of roast pork in delicate gravy, our world-renowned dumplings (which you might know under the title of knedlíky), and either red or white braised cabbage. It’s tender, it’s juicy, and it simply bursts with flavour. These three ingredients are the absolute staples of Czech cuisine, so it makes sense to try them all in one go with a portion of this absolute classic.

As far as food goes, crispy pork belly with parsley sauce and boiled potatoes (stegt flæsk med persillesovs) is without a doubt the most traditional dish you can come across while you’re in Copenhagen or Denmark. In 2014, our government set out to find the most Danish dish – and this hearty option came out on top with more than 60,000 votes. It consists of crispy pork belly with boiled potatoes and a white, creamy parsley sauce with chopped parsley on top. The dish can be traced all the way back to the 1800s and has, during its history, been considered a poor man’s dish since it was one of the fattier dishes and pork was very easy to come by. If you didn’t know, Denmark actually still has more pigs than people!

If you find yourself in Denmark try some stegt flæsk med persillesovs, which is served on many menus in Copenhagen and throughout the country.

If you visit Greece, you should definitely ‘go for souvlaki’ as Greeks simply say when they mean the trio of classic Greek fast foods:  souvlaki, gyros, and pita souvlaki.  All of these dishes are served in the same kinds of venues, called a souvlatzidiko, a Greek culinary institution. Souvlaki (sometimes known as kalamaki), first appeared in the town of Livadia in 1951 but with origins dating back to ancient Greece, as archaeological artefacts have revealed. The name refers to the wooden skewer (or “little reed”) the meat is cooked on. Skewers are filled with cubes of meat that have been marinated overnight, broiled over charcoal, and finally salted and peppered.

Gyros consist of either pork or chicken meat placed on a large metallic skewer and broiled while the skewer is rotating on a vertical rotisserie. The cooked and sliced meat is then wrapped in a slightly grilled flatbread called a pita and then filled with tomato, onion, tzatziki sauce, and French fries. In the case of pita souvlaki, the gyro meat is replaced by souvlaki inside the grilled pita. No matter which one you order, you won’t be disappointed.

A hearty bowl of goulash | Photo by Budapest Urban Adventures

The true character of Hungarian cuisine is based around simple, hearty dishes rich in flavour – the kind that stick to your ribs. It’s safe to say that the most famous Hungarian dish undeniably goes to goulash, a filling, paprika-flavoured soup with beef and some vegetables. Without going too deeply into the details, goulash started out as a kind of a stew, but didn’t include paprika at first as the Hungarians were not introduced to it until the mid-18th century.

But for goulash to become what it is today, paprika was essential. The ground pepper gave the dish not only a nice colour, but a distinct taste. Oddly, goulash as a stew in Hungarian used to be referred to as pörkölt (a stew), while the name goulash (gulyás in Hungarian) referred to a soup. This is why even now, different dishes can go under the same name, sometimes even in Hungarian restaurants. But it doesn’t really matter if the dish is listed as pörkölt, a goulash, or even our other famous dish, the paprikash (paprikás), because they are all based on the essential combination of fat, onion, and paprika. As such, they are all closely related – and equally tasty.

Similar in nature to bread pudding and French toast – but with it’s own regional flair – the Spanish torrija is a simple yet must-try traditional dish with an interesting history that’s well worth seeking out on your next visit to Spain. If you take some basic ingredients such as bread, egg, milk or sweet wine, you can create one of Spain’s most traditional desserts. The torrija, a fried three-day-old slice of bread which has been dipped in milk, egg, honey and cinnamon (or in a sweet white wine and sugar), is now a must during Easter week in Spain.

If you visit Spain during Easter, all you will seem to see are people who eat, breathe, and fry torrijas. However, for those desperate to try a torrija outside Easter, you can find them at La Casa De Las Torrijas in Madrid.

Is there anything better than a pierogi? | Photo by Krakow Urban Adventures

If you’ve ever eaten pierogi, chances are good that you fell in love at first bite – and we wouldn’t blame you. The soft, pillowy dumplings filled with cheese and potato (among other possible fillings) is the ultimate in comfort food: filling, hearty, and totally satisfying, whether boiled or fried.

Pierogi are pierogi – there is no better world for this famous Polish dish, although some people try to translate the name as Polish dumplings, Polish raviolis or even small empanadas – none of which are accurate. For us, pierogi is something unique and integral to our culture. You can imagine them as half-circular dumplings stuffed with many types of different fillings, made out of unleavened dough.

The most classical fillings are cheese and potatoes, cabbage and mushrooms, or meat but you can also find sweet pierogi filled with strawberries or blueberries, and so many other flavours. For example, marzipan with poppy seeds or turkey with peaches, especially during the Pierogi Festival we celebrate in Krakow in the middle of August to honour the  legendary, patron saint of pierogi: St. Hyacinth, the first Polish Dominican monk.

If we’re talking about Romanian national food, papanaşi should be given the title of  best national dessert. Based on a recipe originating in Moldova (the northeastern part of Romania), this delicious fried dough and sweet Romanian cheese has the shape of a doughnut. The traditional sweet treat is then garnished with fruit jam and sour cream. The combination of the hot, fluffy doughnut with the cold, melty sour cream and the mouth-watering fruit notes of the jam will be instantly addictive for anyone with a sweet tooth. You’ve been warned.

Nowadays, papanași have become popular all over the country and restaurants compete to come up with the best rendition. If there was one thing, and one thing only that you could choose to experience Romanian cuisine, take our advice and go for papanași.

If you’re in Slovakia, try some Halušky | Photo by Bratislava Urban Adventures

There’s no way you can visit Slovakia and not try a national dish called halušky. What is it, you ask? Halušky consists of what you might call a noodle (some would argue a dumpling — many English versions of menus have translated this as gnocchi). While we won’t sit here and argue semantics, we will say that basically all of these descriptions are correct. The noodle camp may be confused by the shape, which is more gnocchi-like than anything else, but hey, what are gnocchi but tiny potato noodles? And what are dumplings but larger versions of those potato noodles? The debate could go on and on, but the gist of it though, is halušky is the ultimate comfort food.

In addition to the noodles (or dumplings or gnocchi), halušky is smothered in a cheese sauce made of not just any cheese. No, this Slovak staple is smothered in sauce made with the traditional bryndza cheese, which #localsknow, is best when it comes straight from the farm (although it’s still just as tasty in its pasteurised form served up in Bratislava restaurants). This decadent dish is then topped off with a bit of hot, tasty bacon to provide the ultimate culinary solution for when you just want the travel foodie equivalent of your go-to childhood comfort food. It’s like having a long-lost Slovak grandma give you a warm hug.

If you’re looking to try the best food in one of our destinations, please join us for one of our group food tours, or if you have something more specific in mind, why not have a go at curating your very own private food tour?! Fill out the online form and a local member of our team in your chosen destination will be in touch to help you organise your best foodie day ever!