Blog > Does this Chang Phueak restaurant have the hottest som tam in Chiang Mai? 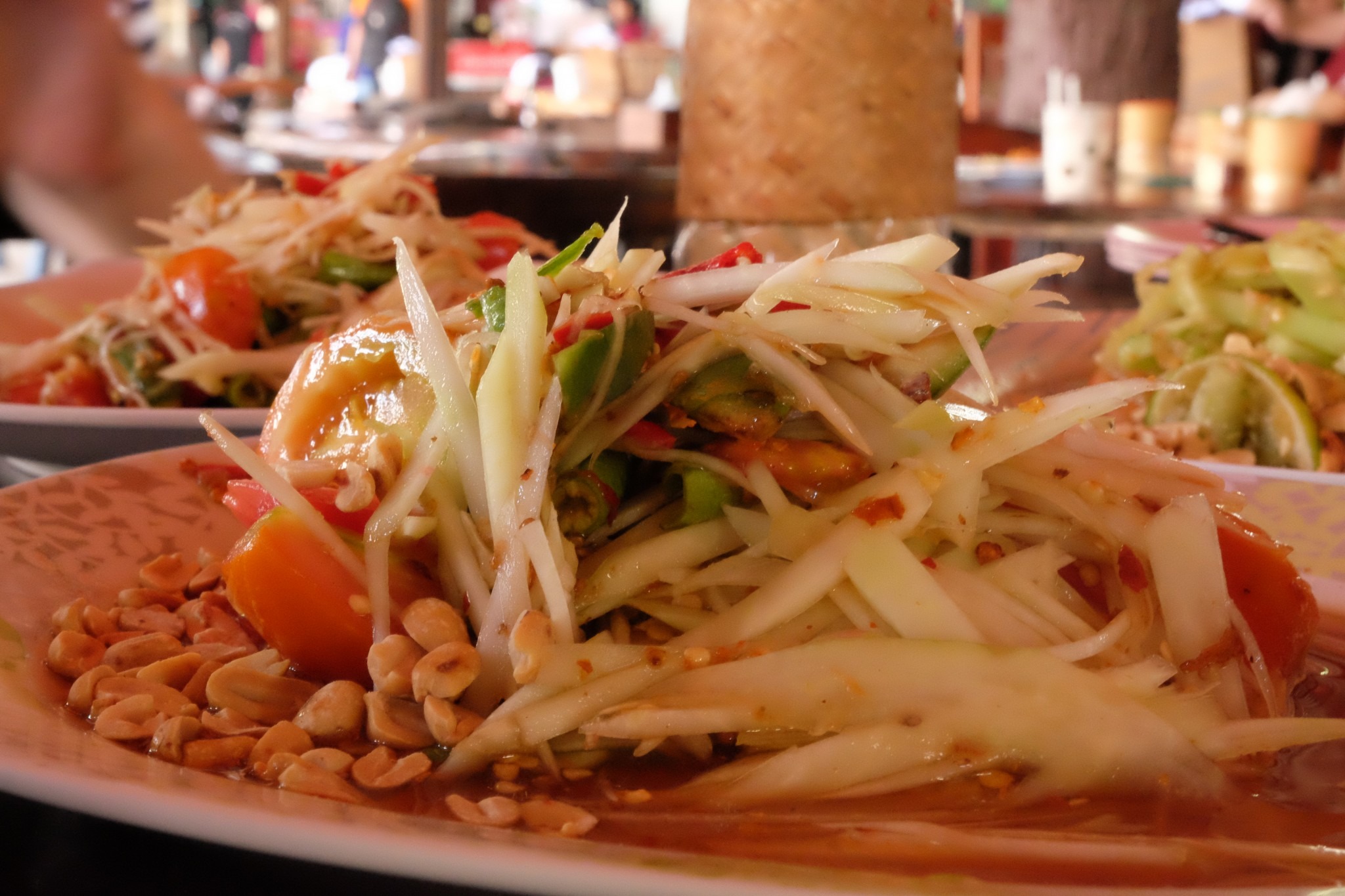 Does this Chang Phueak restaurant have the hottest som tam in Chiang Mai?

If you come to Som Tam Udon on a weekend, be prepared to wait a while. The massive restaurant (it easily sits about a hundred people) is so insanely popular among locals that there’s regularly a line-up down the street on weekends. Yet despite its massive popularity, few travellers find their way here. It could be because of its location that’s a good way’s away from the touristy old town and the expat-filled Nimmanhaemin — there are three locations and none are close to where most farang (foreigners) explore. Or it could be because of its intense level of spice that will challenge even the most heat-loving foodie. Order their standard som tam (papaya salad) and be prepared for your face to tingle, your lips to go numb, and your tongue to burn as though you’ve licked the sun. Or, if you’re a total masochist, get the Lao-style som tam, which is even hotter.

Of course, for most Thais, the heat barely registers. I ask Natthachai (better known as Buddy), my Urban Adventures guide for the day and an avid cook, whether Udon’s som tam is hotter than his homemade version. He gives me an evil smile. “Mine is spicier,” he replies. Meanwhile, after a dozen bites or so, I’ve guzzled a bottle of water, a glass of soda, and am stuffing my mouth repeatedly with sticky rice in an attempt to calm the burning. Buddy tells me there’s only one way to deal with the heat: keep eating. I think he’s kidding, but soon realise it’s true. It’s as soon as your mouth stops moving that the spice kicks in and your brain recognises the torture you’ve been inflicting on your tongue. Can you handle the heat of this shop’s som tam?

Som tam is considered part of Isan cuisine, which explains its extreme heat factor. Isan is the region of northeastern Thailand, along the borders of Laos and Cambodia, with food that mirrors the flavours found in the neighbouring countries. As a northern city, Chiang Mai serves up a lot of Isan-inspired dishes — far more than you’ll ever find in the south. And even dishes that have worked their way south — such as som tam — have a distinct flavour in Chiang Mai, where the Isan influence holds stronger.

At Som Tam Udon, there’s more than just basic papaya salad on the menu — in fact, there are nearly 30 variations of the dish on offer, some based on other fruits and vegetables, such as mango, pomelo (a citrus fruit similar to grapefruit), corn, cucumber, and santol (a seed fruit similar to lychee). And a classic som tam meal includes more than just the salad — chicken wings and nam tok moo (pork salad) are two common side dishes.

Fun fact: the word ‘nam tok moo’ translates to ‘waterfall pork’ — so named because of the way the pork juices, or water, drip from the pork while it’s cooking. Shame some of that ‘water’ can’t cool the burn on my tongue.

How to find it: On Soi Tantawan, northeast of where Highway 11 starts at Maya Shopping Centre, in Chang Phueak / Ban Sathaphon.

Chiang Mai’s old city is the prettiest place in town – and also the best area for grabbing delicious Thai food. But with all the tourist restaurants in the ‘hood cooking mediocre khao soi and bland som tam for backpackers, it can be hard to find the good stuff if you don’t know where to look.