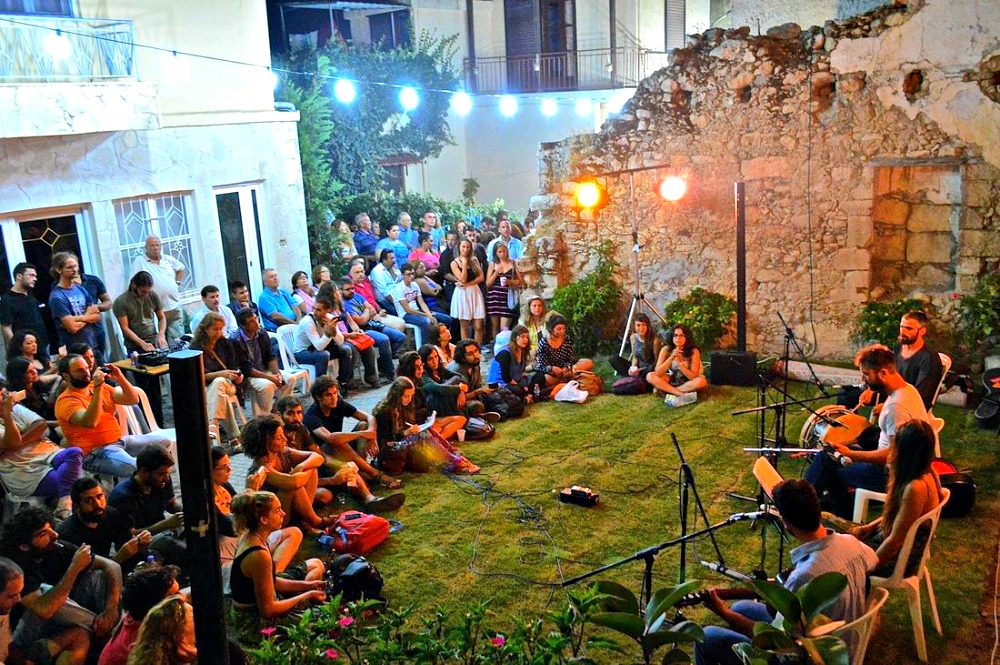 What do you get when you put an Irish musician, a musical workshop called the Labyrinth, and a traditional Cretan village together? Well, you get one of Crete’s most famous and beloved music festivals, that’s what!

Cretans love good music, parties, and basically any chance to celebrate. If you take a look at many artefacts left over from the Minoan civilisation that was once present in this area, you’ll find many remainders of items that one would traditionally use to celebrate — it’s clear that the act of celebrating played, and continues to play, a vital role in society on the island.

Houdetsi is a village located 23 kilometres south of the city of Heraklion on Crete. It’s a mountainous village with approximately 1,000 residents. The village is blessed with crystal clear waters, fertile land, beautiful churches, astounding architecture, and of course, an amazing landscape. In the past, wealthy citizens from the capital (Heraklion) visited Houdetsi during the warm summer months, as the leafy village provided a cooler alternative to the scorching beaches of the city.

Houdetsi is the perfect backdrop to learn about Cretan traditions

Over the past six years, however, many locals (and travellers too!) have flocked to the village for a four-day celebration of music, food, and art.

The original idea started as an opportunity to partner with the “Labyrinth Musical Workshop,” and the local community that hosts it, to mutually recognise the human need to spontaneously express oneself.

There’s also plenty of souvenirs and traditional items to purchase for all the shopaholics out there!

The Labyrinth Musical Workshop is a unique educational institution dedicated to the study of the world’s modal musical traditions, and every year Ross Daly and his colleagues organise an impressive number of seminars and masterclasses, which are taught by many of the world’s greatest musicians.

The colours, the sounds, the smells… you’ll never want to leave!

The Houdetsi Music Festival is a magical synthesis of different musical elements, combined with local colours, images, fragrances, and flavours.

There’s just so much to see in one tiny village!

Apart from the Labyrinth Municipal Workshop, which is directed by Ross Daly, co-organisers are the Municipality of Archanes, the Region of Crete, and the Cultural Association of Houdetsi.

The bouzouki is probably one of the most relaxation-inducing instruments out there!

If you’re travelling around Greece this summer, and are thinking of taking a trip out the islands, definitely consider stopping by Crete! The island boasts beautiful beaches, great food, a rich history, hospitable people, and plenty of things to do! The Houdetsi Music Festival runs in August and is free for all — it’s also a great way to interact with the Cretan community, and is a wonderful way to learn about the island in a unique way!

Can you think of a better way to spend an August summer night? We think not!

The Mediterranean’s fifth-largest island, and Greece’s largest, Crete is a remarkable mosaic of stunning gorges, rugged mountains, and beautiful beaches. With Europe to the north, Asia to the east, and Africa to the south, Crete has always been at the crossroads of civilisations, having been visited, conquered, and fought for, all while retaining its unique character and traditions. Crete’s famously healthy Cretan diet, picturesque towns and villages, and abundance of fortresses and monuments makes it an ideal place to travel for any traveller.