Blog > Karlín is Prague’s secret neighbourhood that you should discover 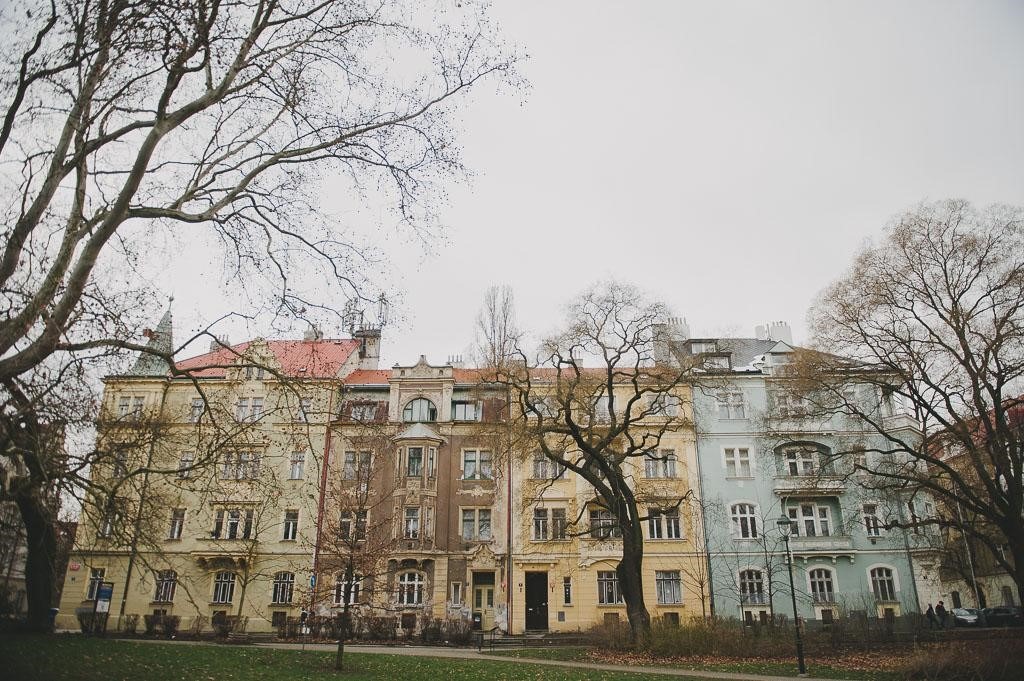 Karlín is Prague’s secret neighbourhood that you should discover

Karlín is a district within such close proximity to Prague’s New Town and Old Town, yet it’s often unexplored, completely unknown to tourists and travellers. This lack of attention is undeserved; beautiful in its own regard, Karlín hosts a myriad of events, great places to get food, interesting things to drink and an exciting, at times even turbulent, history.

The old days: How it all began in Karlín

The borough takes its name from Empress Caroline Augusta of Bavaria, and its first official written mention dates back 200 years to 1817, when construction began on the empty meadows that made up this area between a simple hill and a curving river. As idyllic as this may seem, almost 600 years ago these quiet fields were a battleground. War waged between a proto-Protestant reformist group and the Holy Roman Empire.

The proto-Protestant group, following the preachings of Master Jan Hus, were known as the Hussites; revolting against the governing class, they fought off five crusades against the enforcing empire. The first of these crusades was fought in 1420 on that tranquil foothill that comprises the southern border of this district, Vítkov hill. Back then, an army stormed Špitálské field, marauding up and over the hill into an unexpected surprise. The southern side of the hill held a small guerrilla army of Hussites, who had surprised the crusaders, forcing them into a rout back over the hill and across the field, fording the Vltava river. In retreat, some of the crusading army fell off the cliffs or drowned in the river. The fields lay silent for nearly 400 years.

Many long centuries came to pass. Throughout these times many towns and settlements surrounded the city of Prague, but the fields here were an exception, the floodplain was only mildly dotted with inhabitants and hamlets from the prehistoric era until the 18th century. From 1731, the veteran dormitory Ivalidovna was built on Špitálské field, originally supposed to house 4,000 invalids, their families, and staff. This beautiful building was only one-ninth of the way completed, already serving as a landmark in what was to become Prague’s first proper suburb.

Lying just beyond the Prague city walls, this area was birthed from a new form of planning regulations. The entrance was from the Poříčská gate of Prague, near the modern Powder Gate. The area quickly blossomed in a gridiron fashion, partially due to the industrial revolution’s trickling arrival to Prague. Karlín’s location outside of the walls made for inexpensive living and land parallel to the riverside allowed it to become an industrial fulcrum. In 1822 the first port outside of Prague proper was built in Karlín, stocking ships bound for Hamburg, thus providing a foundation of industry in the district. Cotton looms and textile manufacturing in the early 1800s and steam power in the early-mid 1800s were first arrivals. In 1847 Prague Gasworks opened, which provided more than 200 gaslight lamps to Prague’s city centre.

About halfway through the 19th century, the Knights of the Red Cross released their hold on the fields and other industries flowed in. Soon a railway system was established, giving rise to Prague’s second bridge spanning the Vltava. Built in 1850, the Negrelli Viaduct is over 1,100 metres long. Then, 1863 saw the completion of one of the Czech Republic’s largest religious buildings, the Church of Saints Cyril and Methodius, and in the 1870s, Prague’s fortifications, obsolete and in the way, were torn down. With this, Karlín’s affordability and availability allowed it to blossom further.

The doors had burst open for residents and industry alike, more factories and manufacturing plants were built. As of 1895 Karlín had an electric tram connection to the city, allowing for a quick commute, and in the 1900s Karlín gained the status of a ‘royal town,’ granting it a school and a town hall. The squat two or three story tenements were built upwards, sometimes doubling or tripling in height to provide for the changes in demand for living spaces.

In 1920, a law was passed to unite the surrounding populations of Prague with the city; within two years more than 30 settlements and municipalities would become connected to the city, Karlín being one of these. In the late 1800s and early 1900s, the district was a middle-class central suburb with a lack of social problems. Industry continued to expand and the borough quickly built up a reputation for its entertainment, owing much to the Karlín Musical Theatre, showcasing everything from animal performances to theatre and film, revue and vaudeville. The tides turned with the new government in the 1950s, when the district’s social life deteriorated and its reputation waned. The Czech population began to leave, and the Roma moved in. In 1924, the Czechoslovakian Communist Party was founded in a pub in Karlín — this same pub in 1997 was mentioned by President Václav Havel for the vast amount of skinheads populating it and the surrounding streets, a prime example of the change undertaken by this district. August of 2002 brought an inundation of devastating proportions, nearly destroying the borough in its entirety, bringing with it a new chance of life. The stifling air of hatred within the district was peeled away with the state of emergency declared by the district. It took about one year for life to grow its roots in the area, which took more damage than anywhere else in the city. Since the flood, this central suburb of Prague has again garnered a middle-class reputation; large office buildings populate the former grounds of the port, providing a modern backdrop, a stark contrast to the beautiful array of older tenements and buildings. Local business of all types have moved in to retake the streets and big business moved in as well. The flood brought with it gentrification, leading to Prague’s latest ‘up-and-coming’ neighbourhood: Karlín. 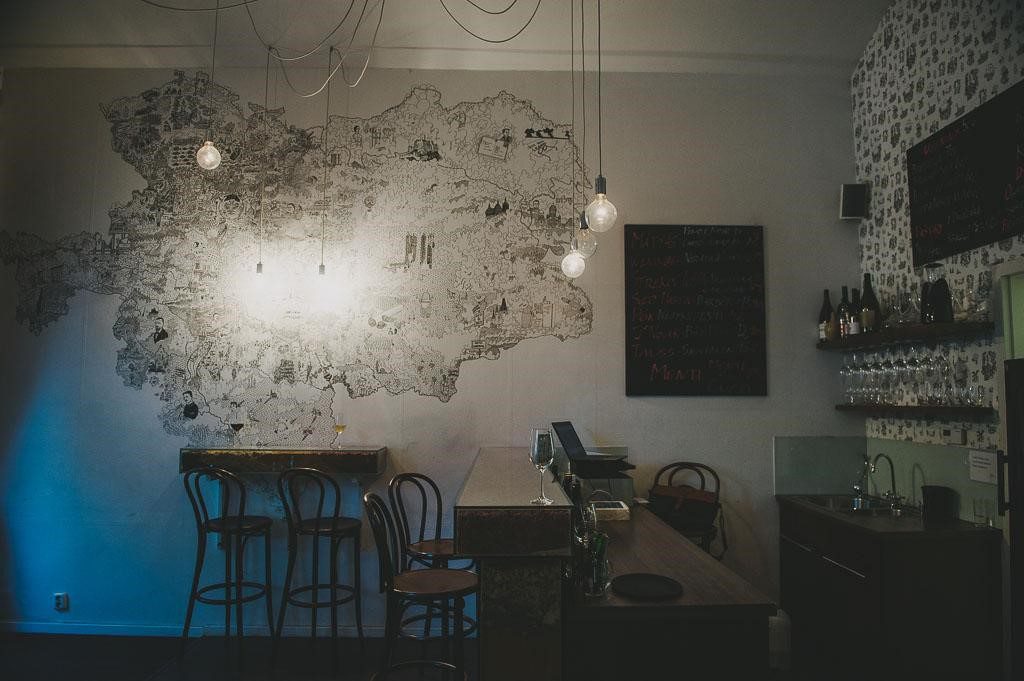 Upon the streets of Karlín, you’ll find all sorts of businesses, often seemingly popping up out of nowhere, revelling in the rebirth of this part of town. One such business has left an indelible mark on a country so well known for its famous beers — Veltlin is a boutique wine store focusing on authentic and natural wines from the former Austro-Hungarian Empire. This shop can serve you some of the most captivating and intriguing flavours your tongue will ever encounter (disclaimer: I don’t use superlatives often, I honestly believe this). Don’t hesitate to ask questions — the staff is very friendly and incredibly knowledgeable. They have bottles available to taste every day and can help you find whatever you might be looking for. There is no better place for wine in Prague than this. 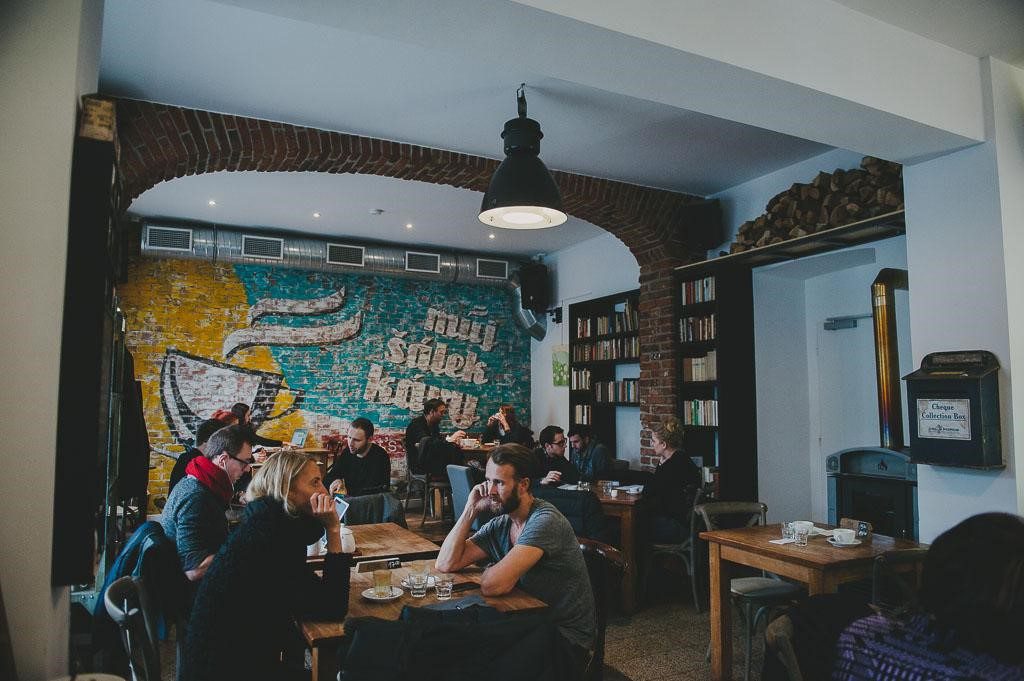 Tea Mountain, sharing a wall with Veltlin, is a simply fantastic tea room and store, well worth a visit for any tea aficionado, whether you’re nearby or not. However, if coffee is your weakness, Můj Šálek Coffee is second to none in this district. Being the flagship café for a locally renowned roastery named DoubleShot, this café has a lot to live up to yet always delivers what’s expected.

Just around the corner is Simply Good, a beautiful bakery and confectionery. Their name says it all — this place is homely and delicious, not to be missed by anyone who cares about their tastebuds. Polévkárna is a soup restaurant that also serves food from the Republic of Georgia, one of my favourite cuisines. Be sure to check out the khachapuri, a Georgian cheese bread.

Proti Proudu is a bistro with homemade products and great sandwiches. The look is modern and minimalist, the food is wonderful (don’t forget dessert!) and the drinks… well the quality should speak for itself at this point. Rumours circling the beer community are that Bad Flash Beers will soon be opening its second location, becoming welcomed neighbours to Proti Proudu. If it’s anything like their first location, the beers here will be good, as will be the marinated hermelín cheese. For great beer and food, Pivovarský Klub is the place to be — with rotating taps of regional microbreweries and a bottle selection big enough to make any beer geek happy, the food here is good enough to have been featured on Anthony Bourdain’s No Reservations TV show. The vegetarian travellers among us need not fret either, Mlsná kavka is a contemporary vegetarian restaurant that gives jobs to those who are “less-favoured on the labour market,” and they focus on fresh ingredients, reflected by their seasonal menu. The food, service, and atmosphere here are all inviting.

Eska is a newcomer on Karlín’s landscape, with its contemporary way of preparing rustic foods. A part of the local Ambiente chain, this restaurant-cum-bakery recently opened to much acclaim, to which it has kept its promise of great homemade food. Their brother-in-law, Lokal, is part of the same chain of restaurants. The menu features regional specialties, such as fried cheese, and highlights Czech’s most famous beer, Pilsner Urquell, in top form. This beer is often shunned by our beer geek friends, however it is famous for a reason, and the reason can only be known when you have it fresh from its home country. This pub is one of a few that serve it properly and unpasteurized. Karlín has seen some of the best and worst of times, but the result is a district that is quickly finding its footing in this city. Close proximity to the centre makes this easily accessible district coveted by many new industries, while still leaving unfettered space for the small family businesses. The old factory spaces were recently rejuvenated, springing to life as restaurants and ateliers, paving the way for the local culture to take off in a natural fashion. This has created a district unique to its surroundings with a lot of potential to move forward. This is an area which is simultaneously often missed, and not to be missed — those who take the time will not be disappointed.