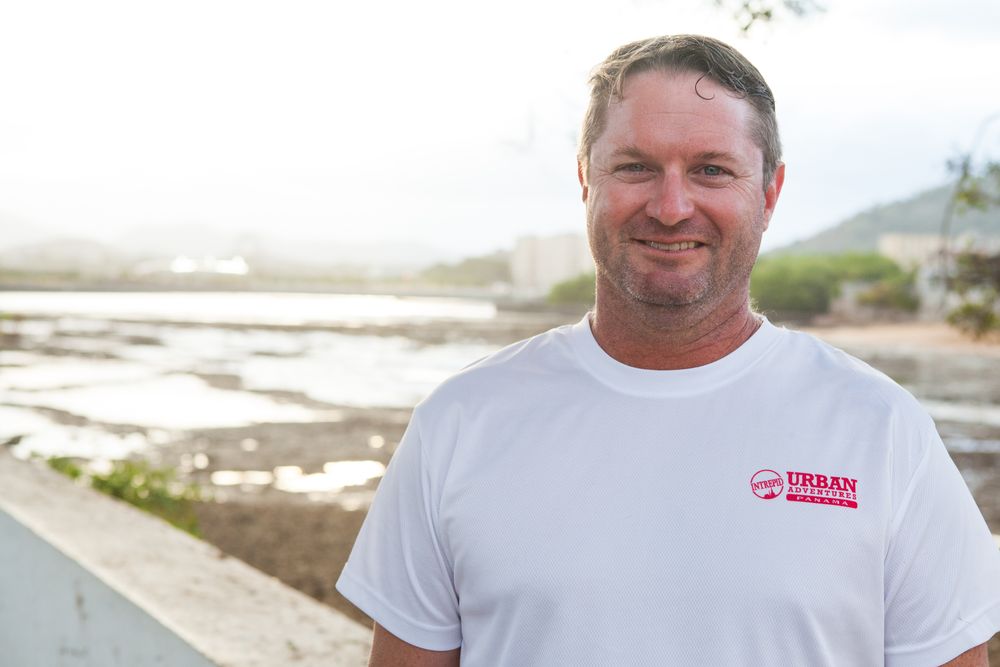 Local guide Kevin is a keeper of Panama City’s secrets

“Every day for 12 or more years, I always made sure I was somewhere for sunset and almost always got up for sunrise. Whether leading a group tour or travelling alone, watching the sun was a great way to start and end each day. Always peaceful, spiritual and different every time.”

Meet Kevin. He lives in the historic centre of Panama City, nestled amongst the narrow, cobblestone streets surrounded by bars, restaurants and shops. He loves to enjoy his morning coffee while the sunrise beams directly into his living room each morning. He can often be found doing business or meeting with friends at Finca del Mar, only a few minutes’ walk away.

This particular night, we are watching the sun go down behind Cerro Ancon in Panama City, from an incognito rooftop bar. As the golden sunlight fades away, the warm lights of Panama City’s iconic skyline start to twinkle. Drink in hand, I settle in to find out just how a man from Boston, Massachusetts came to live as a proud local in Panama, running tours for Panama City Urban Adventures, and how he continues to enjoy sunrises and sunsets in the city.

“That’s a very red vodka cranberry,” Kevin teases the waiter. “Are you sure you remembered the vodka?”

Kevin’s a joker, a keen businessman and you notice his in-charge demeanor from the get-go. He speaks his mind, no two ways about it. He’s also friendly, knowledgeable and incredibly passionate about tourism and his home of Panama.

His start in tourism goes back to his graduating year from University of Massachusetts Amherst, where he earned a Bachelor of Science. After graduating, Kevin bartended on the island of Hilton Head, South Carolina, to save money to travel for a year. When his savings ran dry, he returned home to Boston but was unsure what was next. One day he was sharing stories of his travels in a bar in Boston when another patron approached him to ask if he was interested in working as a tour guide. Not long after that conversation, he took off to Los Angeles, California to train as a guide. A natural-born storyteller, with a knack for history and facts, he quickly became one of the top tour guides running from the Southwest USA to the Canadian Rockies and as far north as Alaska. He worked as a guide for about nine months each year and spent the other three months backpacking, ice-climbing and adventuring around the world. A nomad by choice, he explored Australia, Europe and Latin America.

One day while Kevin was relaxing on a beach in Mexico, chatting with a friend, the idea of a tour running from Mexico to Panama was mentioned. Kevin liked the idea, but thought running it from Alaska all he way through to Panama would be even better. The two friends pitched the idea to another tour company and after his next guiding season, he began leading the Alaska to Panama route. For the next five years, Kevin guided the trip encompassing 13 countries in seven months. He continued until the company from the United Kingdom fell on hard times and fewer European travellers were headed to Central America. The route was stopped.

“What may have been the first responsible decision of my life,” Kevin quips, “I settled in Panama in 2007.” It wasn’t a decision that he made easily. He had travelled far and wide and considered his options. In the end, he felt that Costa Rica had been done, Nicaragua was (at that time) still a bit too unstable and Panama had everything he wanted. It was south of the hurricane belt, operated on US currency and had the best economic potential and stability of all of the countries in Central America. It was also a hub of bio-diversity and had incredible physical beauty. Not to mention the lure of being able to swim in both the Pacific and Caribbean oceans in one day. Although he’s quick to say he doesn’t do it very often, it is a fun claim to fame.

From the moment Kevin settled in Panama, his plan was to open shop as a tour company. Never an easy task for an expat to open a company in a new country, but with support from previous tour companies, the paperwork was filed and he was off and running. Having spent the previous 12 years on the road without a cell phone or computer, he had a steep learning curve into the world of technology, but he has embraced it. With his vast experience as a tour guide throughout the Americas, he has been able to create unique and fun tours in partnership with Urban Adventures. He is passionate about showing tourists all that Panama has to offer, starting with local experiences. From working with local indigenous communities, to showcasing the past and current history of the Panama canal, to finding great food in the city and enjoying sunset from a rooftop bar, his tours capture the essence of Panama.

Not wanting to give up all of his local secrets, Kevin is a bit reserved on sharing his favourite sunset spots. “You’ll just have to come take one of our tours to get all of the insider info!” He laughs and then goes on to share a few tips, but just enough to entice you to visit, not enough to give it all away.

“Anywhere on the water is beautiful for sunset,” he says matter of factly, and I have to prod him for more specifics. He quickly mentions the well-known pedestrian area of Cinta Costera, popular for locals, families and tourists alike. It’s a great spot to grab fresh seafood and it comes alive as the sun goes down. Meandering around the tip of Casco Viejo is another option; as it is surrounded by tidal waters that retreat to expose mud flats at low tide. Another of his favourite spots is from the Amador causeway looking out at the Bridge of the Americas and catching the sunset reflection in the Panama Canal.

For someone looking to grab a bite to eat and a drink, the rooftop bars in Casco Viejo are warm and welcoming. One of Panama’s most famous rooftop bars, Tantalo, is the first one that Kevin mentions, but since that’s not an insider secret, I dig for more. “Alright,” he gives in. “How about Casa Casco? It’s home of a five-star restaurant and rooftop bar with an incredible 360-panoramic view of the city. Many years ago it was a cheap hostel and now it is full of warm character and delicious food and wine.”

As we finish chatting over drinks the chatter of people around us grows louder. Apparently Kevin was not the only one to know about this hidden rooftop bar that seats only about 10 or 15 people. I never do find out the name of the little bar where we drank vodka and cranberry watching the sun go down. When I question him later on, Kevin cheekily declines, saying it was a secret.

Best Street Food in Havana: Coco Glasé in Plaza Vieja
Guatemala Coffee Cooperative: My first cup of coffee
Discover the urban art of Valparaiso
Things to do in: Punta Arenas
How to make Puerto Rican rice and beans