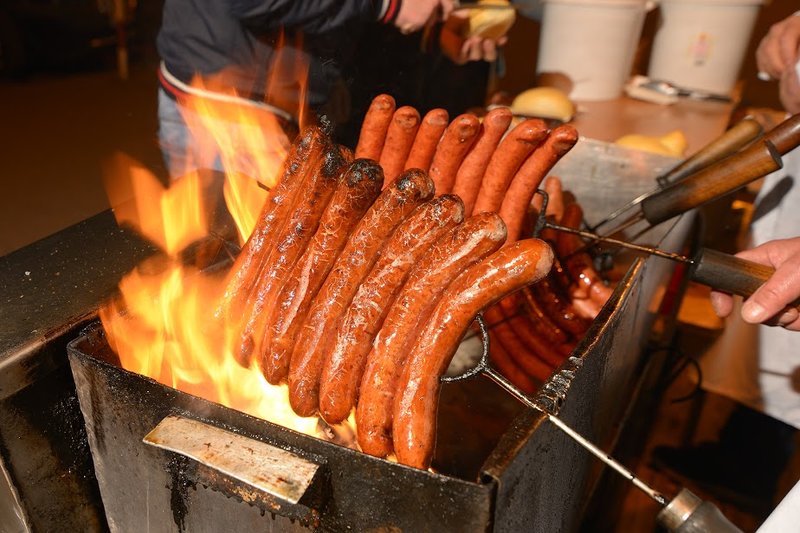 There’s more to Polish cuisine than pierogies — and in Krakow, there are serious street food stalls, cafes and bars serving up delicious snacks along with a dose of local culture and history. Here’s where to get the best street food in Krakow.

This complex is a real city inside a city, created in the 15,000-square-metre former Tobacco Factory, just a stone’s through from the Main Square of Krakow. All the industrial buildings were carefully renovated to integrate, in a creative way, the local community, start-ups, artists and tourists. Here you’ll find a variety of restaurants, bars, design shops and coworking spaces. Among others, you’ll find a vegan bar, a Mediterranean restaurant, a craft beer pub and a design forum, all so close to each other that you can visit all of them in a night. Incredible, isn’t it? 10 Dolnych Młynów Street. 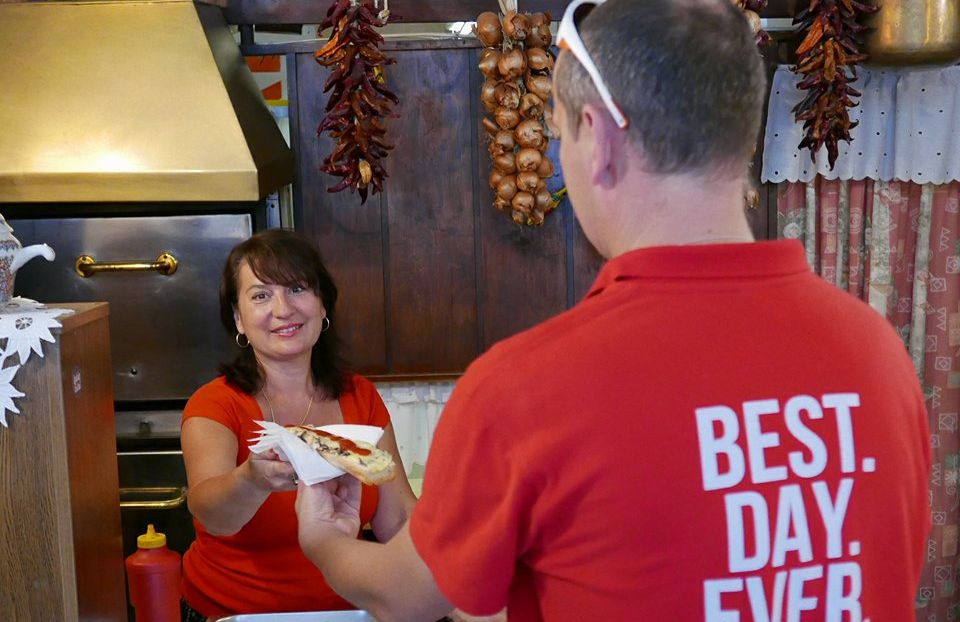 In Krakow, you can buy zapiekanka (a long, open-faced sandwich) everywhere, but local residents know there’s only one place where this special taste has survived the turbulent years of transformation. A microscopic shop in the middle of Sienna Street, a stone’s throw from the Main Market Square, Zapiekanki od 1980 roku still maintains tradition and, since 1980, has been selling true zapiekanka.

Ms Marta opened her shop at a time when the cracks in Poland’s Communist regime were starting to crumble; many say her stall was the first fast food restaurant in Krakow — a place where on-the-go meals were sold, flouting the law forbidding American-style cuisine. Her toasted open-faced sandwiches became a symbol of freedom, and eating one was a way of fighting the regime. Today, Marta’s shop doesn’t hold the same political power, but for the locals who remember, her simple sandwich holds heavy, nostalgic significance. 3 Sienna Street.

Another option for an unforgettable night in Krakow is to head back to the Kazimierz district, known for its nightlife, and spend the rest of the evening roaming local bars, talking to people and dancing. If you feel hungry at some point, don’t miss the excellent smoked sausages and fresh rolls with mustard, served right on the street directly out of an old blue Communist-era van at the busy market place Hala Targowa, located between Kazimierz and Old Town. 4 Grzegorzecka Street.

This is a great corner of the former Jewish district, Kazimierz, and is where you can find different food trucks and eat local snacks while checking out the huge white and black mural made by artists participating in the Jewish Festival some years ago. Reasonable prices and enthusiastic sellers are two of the biggest highlights of Judah Square. My recommendation is to try kumpir, a huge potato served with cottage cheese, green onion and a long list of other optional ingredients. Other good options are more international, but also very, very tasty: Belgian frites, Czech trdelnik or typical British fish and chips sold directly from ane original double-decker bus. Go inside, it’s well worth it! 16 St. Wawrzynca Street. 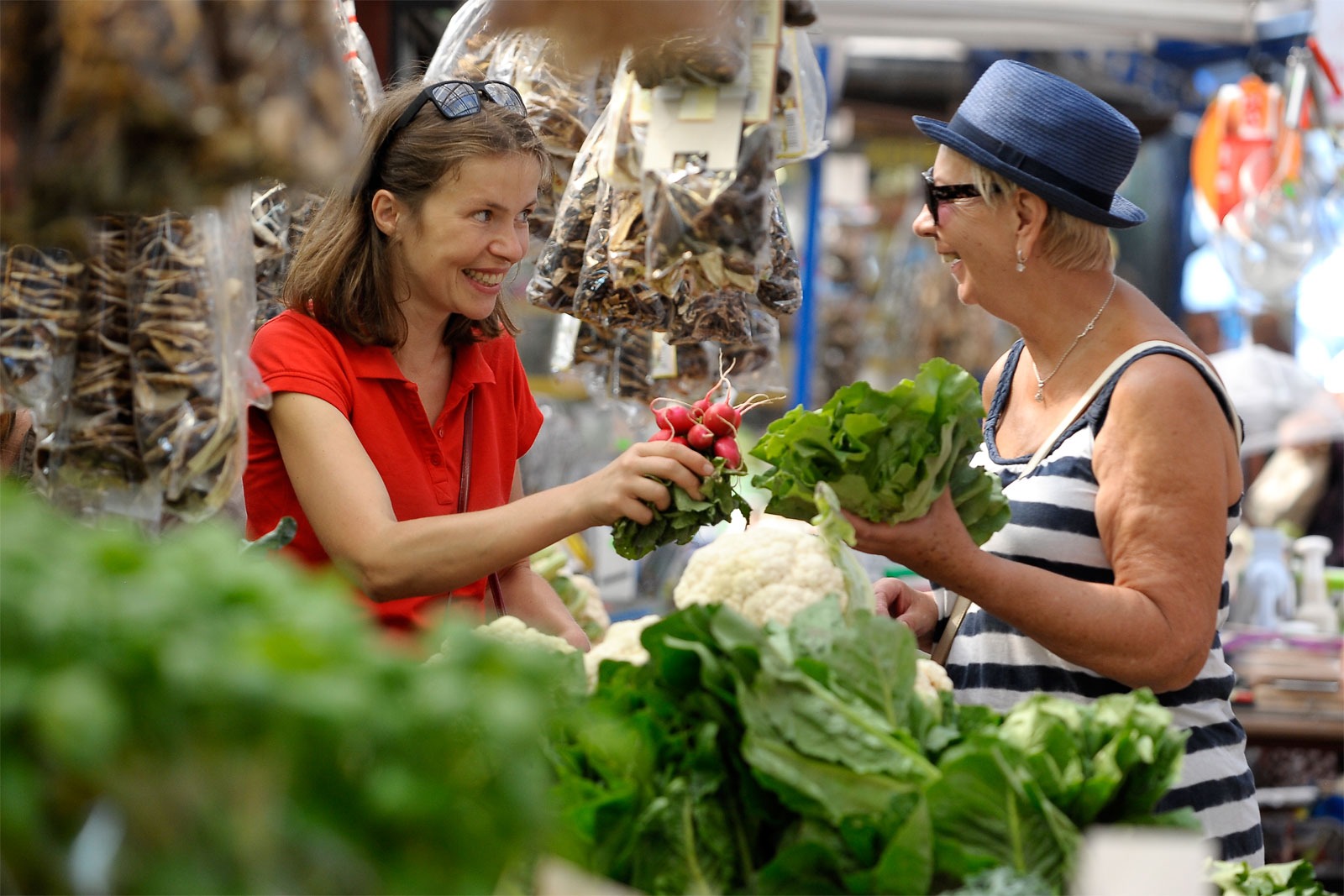 For the best food shopping in Krakow, we recommend Stary Kleparz Market, located very close to the Old Town, just north of St. Florian’s Gate, between Matejko’s Square and Dluga Street. Having run since the 18th century, this is the oldest and most colorful market, where farmers bring fresh fruit and vegetables to sell daily, and for quite reasonable prices, too. You will always find locals here looking for good bargains. Try some samples of fresh mountain cheeses oscypek and bundz, famous Polish sour cucumbers or sauerkraut, and locally made sweets. As there are some expats in the city, Kleparz also offers small shops selling typical Hungarian, Italian and even Arabic foods. Do not miss this place as they have great decor, good prices and fresh coffee that smells like heaven.

New Square is the most classic place for locals to hang out. Wherever you look, there is a bar or restaurant, and many locals will spend an entire night in this one spot. You could meet up with friends at one corner of the square and then spend hours visiting the different bars around it. Every Sunday morning there is a huge flea market, where I often go to look for vintage furniture, old records or handmade pottery.