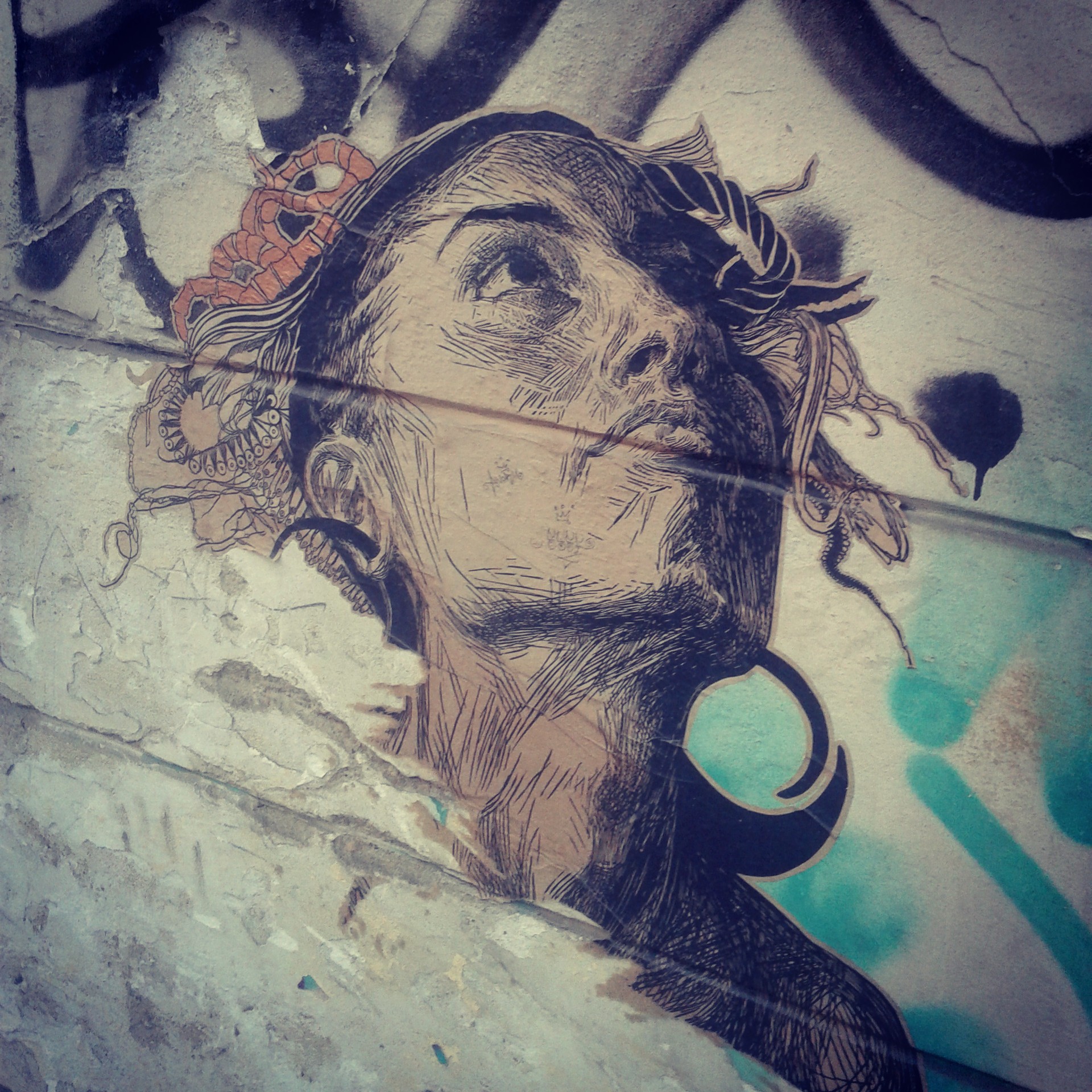 My credentials as a street artist are as follows: Once upon a time (22 years ago, to be exact), on a nice sunny day after school, my friend and I found our way home through forests, abandoned industrial areas, and all those zones that little rascals like to explore — and mark. It didn’t strike me immediately, but when I got into the bed it definitely did. My heart started pounding. My mind screamed. “You painted your NAME on that wall!”

We had found a few half-full spray cans on our way home and had decided to show off our artistic talents by spraying all kind of silly stuff on the wall (professionals would call them “throw ups”). Over the next few weeks, I kept waiting for police to appear on our doorstep and take me to jail. Happily, that never happened. I maybe could have told them it was an experiment for our history class — during WWII, aerosol spray cans were used to fight not against tanks, men, or submarines, but something much smaller: malaria-carrying bugs. Now they are used to fight against colourless spaces in urban areas. I’m admittedly not a pro street artist, and won’t claim to know everything about the ever-evolving Prague street art scene. But I’m a fan of the art and pretty observant, and I respect those who express their ideas in a platform that is not always inside the guidelines of conventional society. I think there are a lot of us who prefer colourful and even thought-provoking art around the city walls over commercial signs telling us to buy this and that. 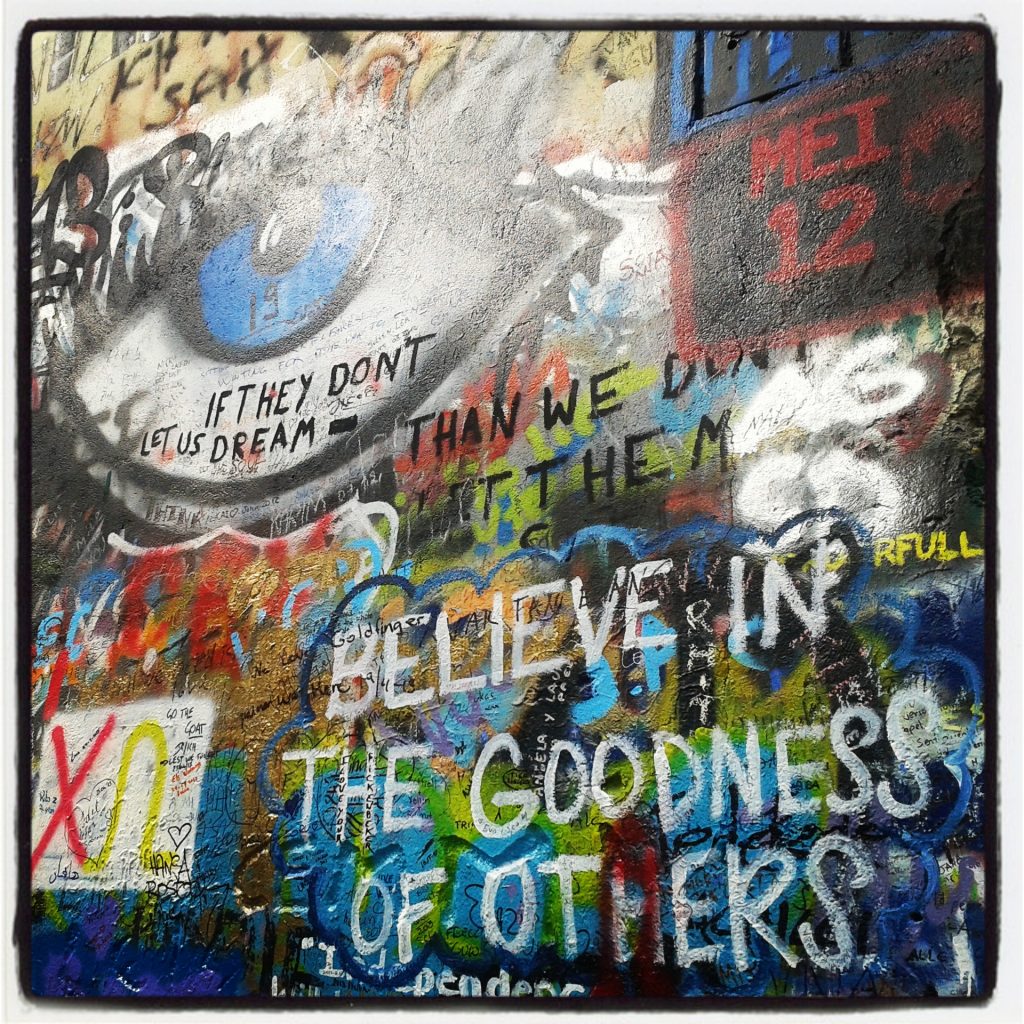 How did the wall meet the can in Prague?

During the Czech Republic’s communist rule, expressing your own ideas was strictly limited, but the Lennonists (not Leninists!) were the forerunners of free and artistic expression. Their legacy is probably the most legendary graffiti wall in Prague: the John Lennon Wall. And communist rulers, being not the most tolerant for open expression, ironically created perfect platforms for graffiti: panelakys, the housing blocks with thousands of square metres of ugly concrete walls just asking for some make-up.

However, there are also even deeper roots to the graffiti here (and not just here, but generally in Europe), when you consider the etymology of the word: all those amazingly beautiful 16th-century renaissance buildings decorated with sgraffito by the masters of “plaster, chisel and hammer.” The word in Latin means “to scratch.” The difference between creative and well-respected street artists and vandals is that the good ones make ugly buildings cooler, more colourful, and more beautiful, while the others manage to make beautiful historical buildings uglier with their scribblings.

Let’s have a look at some of the most respected in the city (who also happen to be some of our favourites).

I remember when I saw his amazing blockbuster at Dejvická for the first time. The Hand of God, which rather looks like hand of Mickey Mouse, points toward those walking past, with the words, “Choose to Be Happy.” Such a clever piece of art with a positive message. And one my favourite short slogans by him is “God Saves, We Spend” — funny and clever thoughts about the consumer society. Oner is incredibly talented and the city of Prague is very open minded – making the artist and the city a perfect pairing. In this UNESCO-protected and historical town, you would expect a stiff attitude about street art, but it’s rather opposite — just ask David Černý.

Whenever there is space in Prague that needs something uplifting and colourful, it seems that Pasta Oner is the go-to guy . Whether it is a bio food store, construction yard, modern art gallery, or huge bridge-supporting column, he livens up his canvases. His Instagram account is surely one to follow. No longer painting underground, his face even appears nowadays in popular magazines.

But I think that the final stamp of approval from the city came when he was asked to do a stained glass window to one of the most legendary passages in Prague. It’s one of my personal favourites to show on our tours.

Some say that he is not only a pioneer in the Czech Republic for graffiti, but even a pioneer for 3D street art in general. I have to confess that I used to overlook his stuff, but then I began to appreciate the approach and surely huge efforts put forth by this graduate of the Academy of Fine arts. My wife is not a big fan of street art, but even she likes his stuff.

I learned from a guest on one my tours — a street art fan from New York — that Jan Kaláb had become a bit of a sensation in the Big Apple when he was going around the city with his abstract pieces of art on canvas and asking strangers to help him to carry them around and take photos of them.

Where to go street art spotting in Prague

There are lots of places to check out street art throughout Prague, but these are a few of my favourite spots. Here you will find a construction zone (seems to be an eternally lasting one) disguised as a street art gallery. Just walk toward the river and you will spot it on your left-hand side. There’s work by Pasta Oner, Point, Tron, and X-Dog, to name a few. The construction yard has been here for about five years and it’s starting to seem like some never-ending construction project, which I wouldn’t mind. I really like passing this spot and finding new details on it.

The C/Red will take you here. I actually stumbled across this area years ago and felt like I was in street art heaven. I like that it changes every once in a while, and, at the moment, you can find work here by Pasta Oner, Point, and also some guys doing really impressive parkour stuff (don’t try to take their photo — they won’t like it). From here, you will also score a really cool view over to funky Žižkov and its iconic rocket. While you are around this neighbourhood, you must have lunch or dinner at the masters of Asian fusion food: SaSaZu. This is one of the legal graffiti walls in Prague, and is constantly open for anybody to come and show their skills. If you are planning to leave your mark in Prague, this might be the spot to do it. (#Localsknow that the right time to work is early in the morning or during the weekends, since it’s actually a parking lot and cars might be in your way.) I visit this wall at least once a month. Tram 14 will take you there, or you can hop off at the Florence metro stop. If you like to go by foot, it’s not more than a 15-minute walk from the city centre. I recommend starting your morning at the most amazing Můj Šálek Kávy (their coffee and breakfast kicks ass!), then head toward the graffiti haven. From there, go for lunch at our favourite after-work beer spot, Pivovarsky Klub, with its six microbrews on tap and our rainy day saviour, Brewers Goulash. This is where you’ll find the famed “Choose to Be Happy” piece that I mentioned earlier. If you decide to see this one on Saturday, you should also hit up the amazing farmers market that’s nearby. You’ll be able to spot the markets easily.

Bohumil Hrabal was kind of my introduction to the humorous and slightly kooky Czech mentality (if my Czech friends are not windows enough for that). He is my secret guide to the nation’s quirk and culture, and died in a way that could fit as a story in one of his books: he fell out of a hospital window while trying to feed pigeons. But you can still meet him today, as there is fantastic mural dedicated to him at Palmovka Metro station. I rely on my inner sense of direction too heavily and when I went to see this mural for the first time, I just took half a second to look at the map at home, then ran to the tram, thinking I’d remember where to go. But when I arrived at the metro stop, I realised I had no clue where the mural was — so I decided to do what Bohumil Hrabal probably would’ve done. I went for a beer, then just wandered around the area until I found the mural. It made me smile — the mural is everything that I had always thought Mr. Hrabal was about. Though the area is worth exploring further for its cool street art, don’t get lost like I did. Take the B line from Můstek, hop off at Palmovka, take a right from the metro door, go up the escalators, and then make a left. The mural is right there. Prague isn’t just blessed with Gothic Spires, Renaissance sgraffitos, and holy Baroque stuff. We might not yet be at the level of Berlin with our graffiti, but when it comes to really funky and interesting sculptures, we’ve got plenty — just ask David Černý. I’ve mentioned him before and he deserves mention again — but maybe we’ll leave Černý and his sculptures for Prague Street Art Part 2.

Explore the city like a local with one of our Prague city tours!