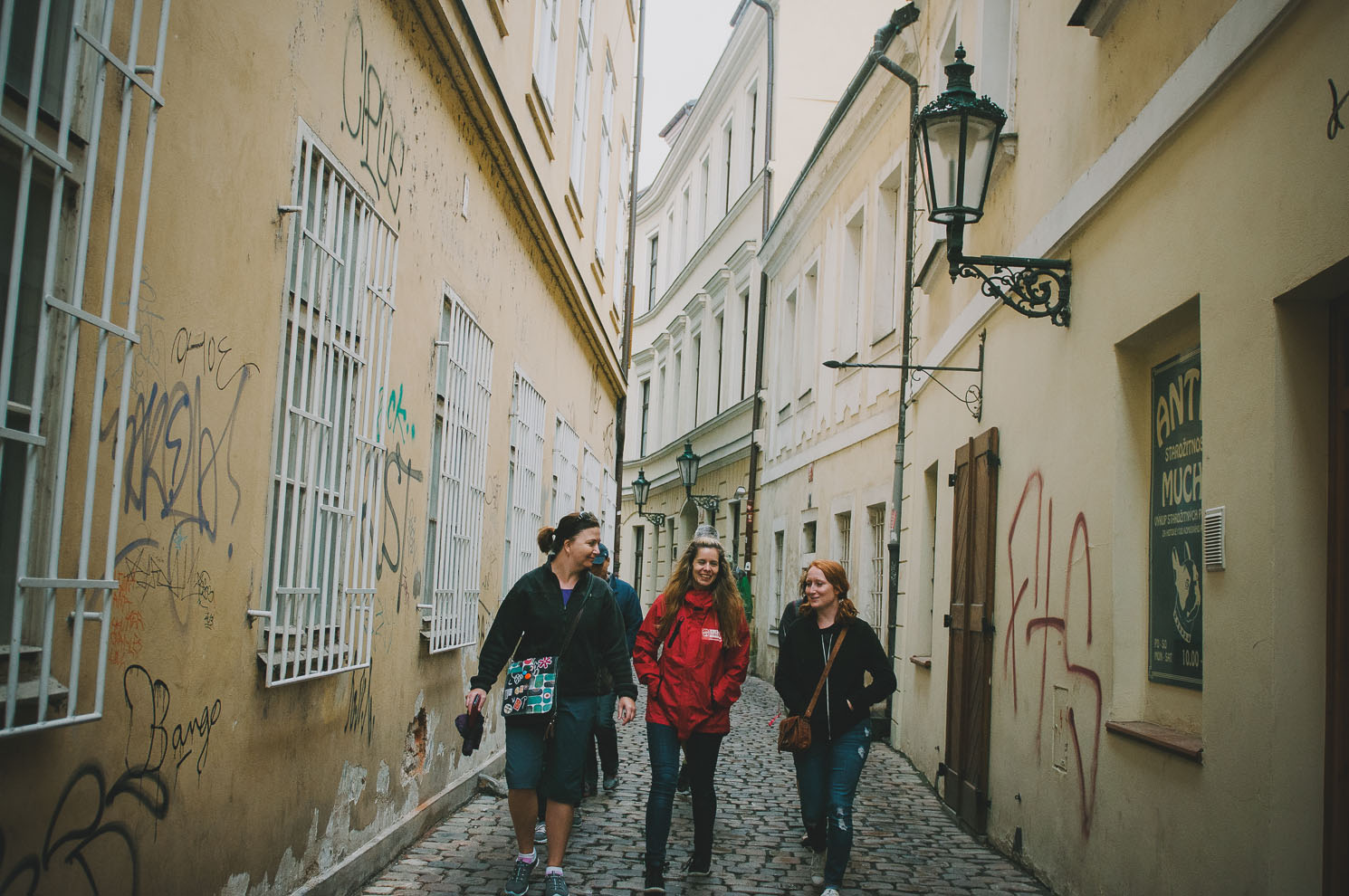 No one knows local life like our guides. That’s why we’ve asked them take us around their favourite ‘hoods and offer their insider tips on seeing the city like a true local. If Old Town Prague sounds like your kind of place, local Prague guide Pavla and her team can show you around on our Prague Discovery Tour.

I don’t remember when I got lost among the hidden lanes of the Old Town for the first time, but it was definitely accidental. I am sure my faithful guidebook was with me, but getting lost in this area is well worth it — you never know what you’re going to find, and the atmosphere of Old Town is truly something special. You can just feel it in all of the tiny curved lanes and narrow streets. When I want to feel as if I’ve gone back to medieval times and avoid crowds, this is where I come.

Why you should visit Prague's Old Town

To get off the tourist trail

Once you have visited the top three Prague attractions (Astronomical Clock, Charles Bridge and Prague Castle), you might want to see something that isn’t on everybody’s list or in every guidebook — and it’s so easy here! Just get off the touristy highway (the Royal Route) and in two minutes you will find yourself in an absolutely different place and era: Old Town.

To get lost in the maze of streets

If you look at a map of Old Town, you’ll see that it’s a real labyrinth. Don’t worry, Old Town isn’t big enough to really lose your way, but even just being lost for a few minutes in these lanes is quite refreshing, especially on hot summer days.

To see the impressive architectural details

You can eventually take a breath and start exploring little architecture details, like local house signs (until the 1770s they functioned as house numbers) and cornerstones (they used to protect facades of houses from carriage wheels).

To check out the many bars and restaurants

It you get tired or hungry, don’t worry. There are tons of places to sit down and relax for a moment in Old Town with a drink or a good meal.

Buildings of the Old Town | Photo via Pixabay

My top 10 things to do in Old Town

1. Use the “hidden lanes” to escape the crowds

Kepler House is actually the gateway to the “hidden lanes,” a brilliant way to escape hundreds of tourists all going the same way. You’ll find it on Karlova street, house number 4. The building has a dark facade where you can see a plaque commemorating German astronomer Johannes Kepler, who used to live in the house until 1612 when Rudolf II Habsburg, his patron, died. This marked the end of the second Golden Age of Prague. Many artists and scientists left at this time, Kepler among them. While you walk the passageway by Kepler House, you can still feel the presence of this famous astronomer.

Divadlo Na zábradlí, (Theatre On Balustrade) is where Václav Havel, the first Czech president, used to work as a stagehand, and later as a dramaturg and playwright in the 1960s. It was here where his famous plays were premiered, “The Garden Party” among them. After the Soviet invasion of Czechoslovakia in 1968, he was banned from the theatre.

Close to the theatre mentioned above is Tricafe, a cosy place furnished like an old apartment. In fact, one of their tables and a few chairs are the same as what my grandfather used to have in his kitchen, so I feel really nostalgic here. You can enjoy the comfort of the couch or sit next to the window and watch actors and theatre visitors coming to the theatre. And their coffee is divine!

Another place connected to Václav Havel is a short walk along the Zlatá ulička. This means the Golden Lane, but don’t mix it up with the more famous one at Prague Castle! The main difference between these two is that you hardly meet anybody here and you don’t have to buy a ticket. Here, you will definitely feel like you are travelling back in a time. But be careful when you visit, as they close it up for the night.

A dominant feature of this tiny lane is the gothic Church of St. Anna. It was deconsecrated a long time ago and is now used as an international spiritual centre, Prague Crossroads (Pražská křižovatka), for all kinds of events, meetings, concerts, etc. This is one of the projects of Vize 97, a foundation established by Václav Havel and his wife Dagmar in 1997. Many famous people visited it, including the Dalai Lama, Madeleine Albright and Robert Redford. The church is only open for special events, so check their website. 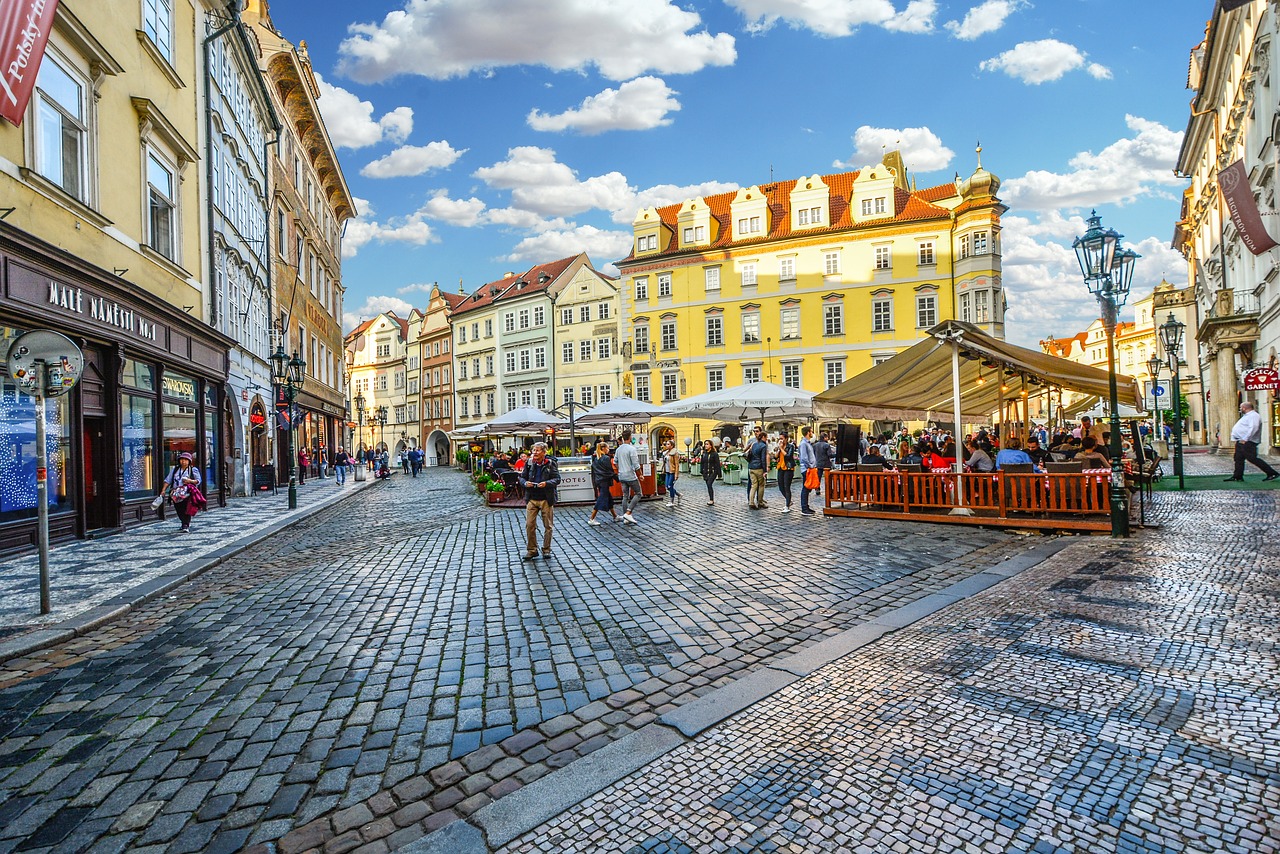 5. Visit the House of the Lords of Kunštát and Poděbrady

If you love architecture, you definitely have to visit the House of the Lords of Kunštát and Poděbrady. It is one of the best-preserved Prague buildings from the Romanesque era. Visiting the gallery inside will give you an idea of how wealthy people lived in Prague in the 12th century. So this is one of those buildings which is actually older than the Old Town itself. It was here where George of Poděbrady lived, until he became the last Czech king on the Czech throne (1458). There is also Café and bar in the building.

If you are a vegetarian, you might be in a trouble in Prague at times. The usual veggie option in Czech restaurants is mainly just fried cheese with French fries (very delicious), but if you come to Old Town, you’ll find the absolutely best veggie restaurant, Lehká Hlava (Clear Head). They open at 11:30am during the week, and at noon on weekends, but beware: reservations are recommended. Besides their wonderful meals, you’ll love their unique interior as the house itself has a very long history.

Betlémské náměstí (Bethlehem Square) is a square not to be missed, especially if you love history. It is named after the Bethlehem Chapel, the biggest building here, originally built for services in the Czech language at the end of the 14th century. One of the first preachers was Jan Hus, predecessor of the German church reformer Martin Luther. But Jan Hus came with his reforming ideas too early. The catholic church proclaimed him a heretic and burnt him at the stake in 1415. If you find any Czech words with a little hook or a line above the letters and you have no idea how to read it, it is Jan Hus’ fault. This was his linguistic innovation!

The Bethlehem Chapel is now used by the Czech Technical University for graduation ceremonies, so if you see nicely dressed people walking around, you’ll know what’s going on. I joined my boyfriend’s graduation here 14 years ago and I was so proud of him receiving a diploma in this building. 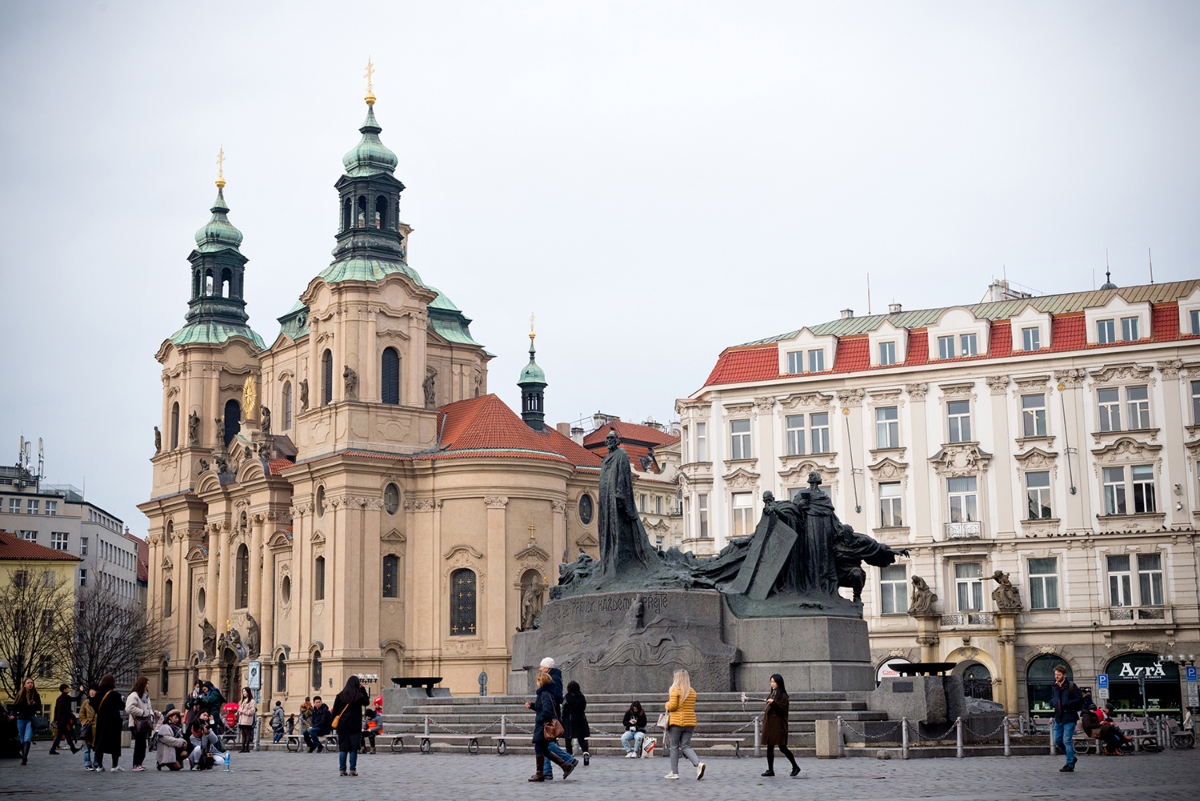 8. Explore the Náprstek Museum of Asian, African and American Cultures

If you travel with kids, or you just enjoy museums, I recommend a visit to Náprstek Museum of Asian, African and American Cultures. Vojta Náprstek, the founder of the museum, was a famous figure in Prague in the second half of the 19th century. He lived in exile in the USA for a couple years and brought many items for the exhibits from his travels. He also received many objects from his travelling friends, so he eventually decided to build the museum. Surprisingly, Náprstek was also a feminist (in the 19th century!). He established many associations, among them the American Ladies’ Club. Many famous members regularly attended meetings here, including Charlotte Garrigue Masaryk, the wife of our first Czechoslovakian president. Náprstek’s original house stands in front of the museum.

If you have a sweet tooth, which I definitely do, do not miss Choco Café opposite the museum mentioned above. There is another one around the corner on Liliová Street, which is always so busy that they decided to open another one in 2017. They have homemade cakes, pralines and macaroons, and you have to taste their hot chocolate — it’s the best in the city! You can also bring some of their chocolates home. Everything they serve and sell, they also make right in the store.

10. Learn the history of Bartolomějská Street

One street, Bartolomějská Street, doesn’t look too special at first glace. But there is something weird about it and you will feel it while walking there, especially at dusk. Many of the buildings are used by Czech police today, but during Communist times they were used by the Secret State Police (StB) for interrogations. The infamous Bartolomějská 14 served as the StB headquarters. Tens of thousands of Czechoslovakian citizens went through this building. The investigative methods of the StB are comparable to those of the German Gestapo, without exaggeration.

The street is named after the church of St. Bartoloměj, one of many examples of high baroque churches in Prague. It looks very simple from the outside, but you will be surprised when you enter, believe me! Bartolomějská Street also used to be part of the Old Town medieval fortification built in 1230s. If you are lucky and the gates of buildings numbered 310/10 and 314/12 are open, go in! There are two medieval towers from the old fortification you can check out.

I have been working as a tour guide for almost two years, and with Urban Adventures since June 2017. I lead the Prague Discovery Tour, which includes all the major attractions in Prague, a boat trip on the Vltava river and the Čertovka canal (which is my favourite part), traditional Czech lunch, and a tram ride to Prague Castle. This tour is the perfect start for discovering Prague on your own.

My first guiding experience was doing guided tours of Klementinum, a former monastery used today as the National Library. During winter, when there are fewer tours outside, I return to Klementinum for several tours a month. It holds a special place in my heart. The main reason why I do this job is because I love the history of our country and Prague is its heart, so Prague has a special place in my heart, too. I love doing little Prague expeditions on my own and sharing my discoveries with people.

I came to Prague to work when I was 18 and I got lost many times in the first months. But this is the best way to get know the city. Now I am settled down with my family back in my hometown (just outside of Prague) and I come to Prague as a tourist myself to guide other tourists so we can admire the city together.