Blog > Why we’re out of love with love locks 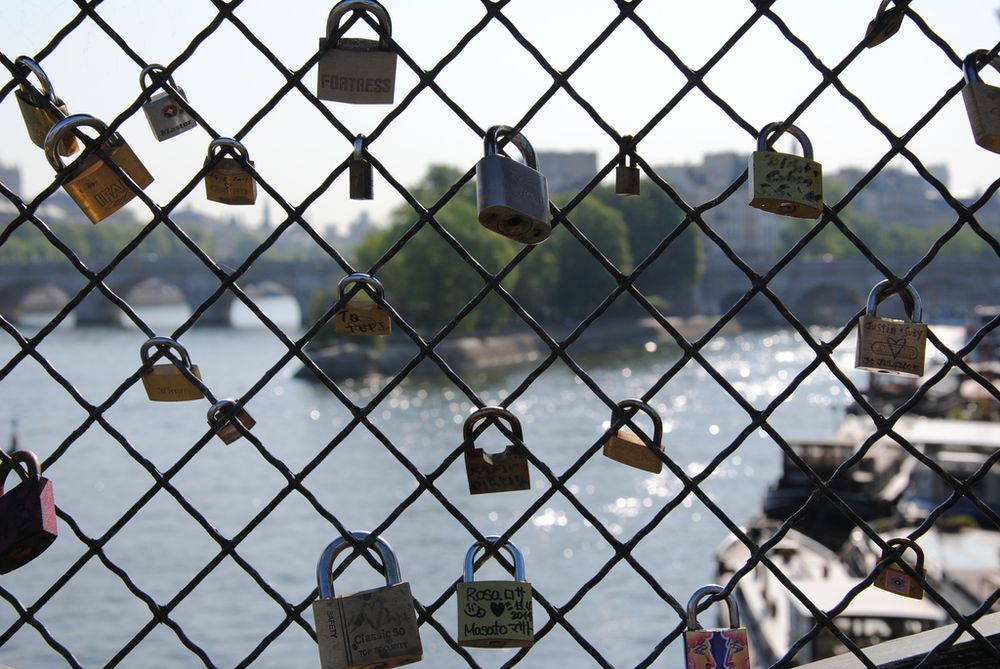 Why we’re out of love with love locks

At first glance, it seems like the ultimate symbol of romance: carve your names on a padlock, lock it to a bridge, and throw the key into the water, leaving you and your partner “locked” together for eternity.

Except it’s not so romantic when the bridge collapses under the weight of such heavy lovey-dovey-ness. (Not to mention that heaps of metal keys are being tossed into waterways to rust.) A few years back one of the original love locks bridges, the Pont des Arts in Paris, made news when its railing buckled and the bridge had to be temporarily shut down for fear of safety concerns. The love locks debate had begun before then, but the Paris news brought it front and centre for much of the world that had previously thought of it as nothing more than harmless romanticism.

We know, we know: they do look cool. And the idea is romantic. And adding just one lock doesn’t seem like it will do any harm. But multiple that one lock by a few thousand, and you have several tonnes of weight added to a fence or railing. What’s more, padlocks don’t cope well out in the elements, and rusted metal quickly spreads. Rusty locks can lead to rusty bridges, further putting its stability at risk. Not so good, right?

Love locks bridges have popped everywhere from New York to Melbourne, Prague to Mount Huang, and while some cities still approve and promote the practice (we’re looking at you, Cologne), the majority of places are putting their feet down and their lock-cutters up. The Paris incident sparked petitions and movements around the world to stop the practice, and made tourists and locals alike more aware of their actions.

So while we appreciate the sentiment (we’re not total love grinches), this Valentine’s Day, we’re not planning to lock our love to anything. But if you are looking for a place to put your love on display, you mushball you, there are a few cities that have alternate options, no bridges harmed.

Show your selfie in Paris

In response to the bridge collapse, Paris encouraged lovers to express themselves through everyone’s favourite digital pastime: taking selfies. Notices in French, English, and Spanish were posted on bridges throughout the city, asking visitors to post a love-themed selfie from the bridge, and to upload it to a live feed of photos. If your goal is for a symbol of your love to live on forever, the internet is a pretty good place to make that happen.

Add to the lock art in Toronto

The Distillery District in Toronto is one of the most romantic neighbourhoods in the city, so it’s no surprise it would also have its own love lock alternate. Along Tank House Lane, an art installation of steel and mesh spells out the word “LOVE” stretching some 30 feet long and 8 feet high. Lovers are encouraged to lock up to the display, and to then share on social media using the hashtag #DistilleryLove (because like the proverbial tree in the forest, if you can’t prove your love on Instagram, are you really in love?).

Write to Juliet in Verona

Have a love question that’s burning a hole in your heart? Need the advice of a fictional teenager who ran away with her boyfriend, got married, and then killed herself? Then get thee to Verona. (Or, if Italy isn’t in your travel plans, just send your letter in the post.) The Juliet Club (Club di Giulietta) receives thousands of letters from lovesick people all over the world, and a team of volunteers responds to each and every one. Or, if you can make it to Juliet’s house (spoiler alert: it’s not really her house because, you know, she’s fictional), you can post love notes in hopes of finding everlasting love. Officials no longer permit visitors to post directly to the house walls, but there are removable panels installed so that the tradition can carry on.

The iconic Love sculpture by Robert Indiana can be found in cities all around the globe, making it one of the most famous symbols of urban romance (whether that’s romance with your significant other or just falling in love with the city itself — we’re guilty as charged of the latter). Head to Indianapolis (home of the original Love sculpture), Philadelphia, New York City, Montreal, Lisbon, Singapore, Jakarta, Tokyo, or Taipei (just to name a few), and you’ve got the perfect backdrop for snapping a photo with your honeybunch.

Take it to the trees in Moscow

Along the Luzhkov Bridge in Moscow, lovers don’t snap their locks onto the bridge, but rather onto metal “trees” that have been installed along the walkway. The sculptures were added in 2007 as an alternate to the bridge, which means locking up here isn’t just okay, it’s encouraged. The installations are working, too, and helping to prevent bridge vandalism. While the trees are blooming with thousands of locks, the bridge itself is mostly love lock-free.

Leave the keys in Seoul

The observatory atop Mount Namsan in Seoul has become a destination for couples who want to lock their love, with the Roof Terrace hosting thousands of padlocks. But unlike in most other destinations, the practice is encouraged rather than criticised. The fencing around the property is covered with thousands of padlocks, as are “love trees” that have been added for locking purposes. We’re not so sure how well the fences are handling all that weight, but thankfully staff have installed “love boxes” for couples to drop their keys into, rather than throwing them over the edge (and onto people’s heads).

Who says you need to be in a specific place to leave behind a message of love? Write it out in the sand on a beach, or stomp it out in a snowy field. Sure, the waves or winds will come and wipe it away, but that’s part of the beauty of it — for a brief moment, your message was out there, even if it was just for the two of you to privately see together. Awww. See? We really do have a sappy side. Just don’t tell anyone.