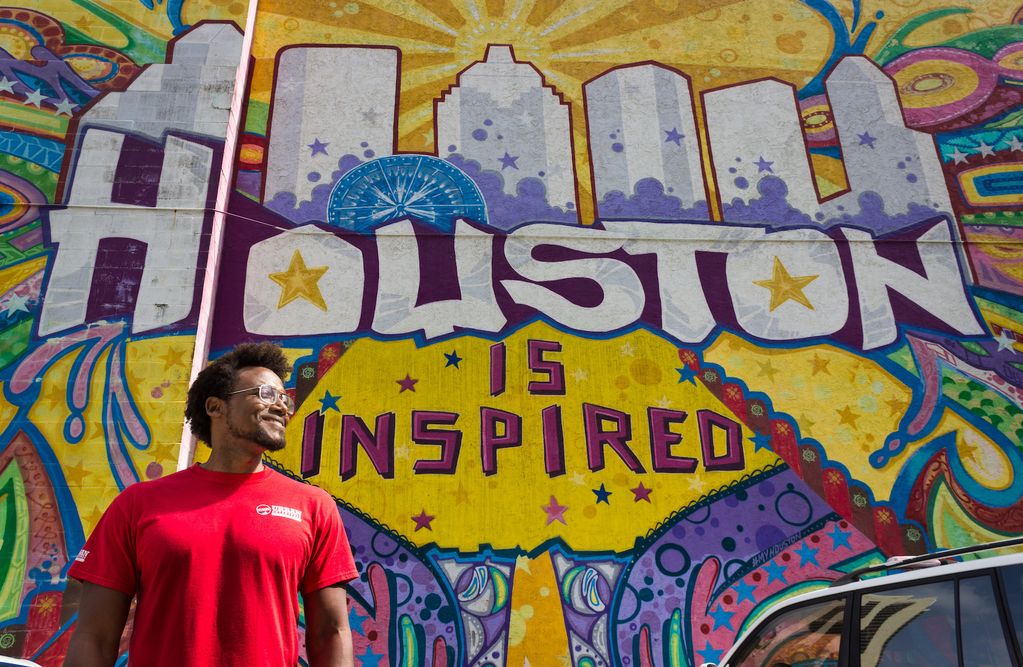 Local guide Dre will make you fall in love with Houston

Some people immediately give off a cool vibe. They simply seem like someone you could talk to for hours. That’s Dre, a Houston-raised, knowledge-sharing tour guide for Houston Urban Adventures. As both a former stunt man and an experienced hypnotherapist, he is certainly filled with a lot of interesting stories.

Born in New Orleans, Dre moved to Houston when he was 8, but it wasn’t then that his love affair with the city began. As a child, he felt he couldn’t truly experience Houston and its culture. He says that’s because without access to Houston’s 21-and-above scene, you can’t get the full picture.

As a young adult, Dre wanted other horizons and so he moved north for college. After five years attending school for film at the prestigious New York University, he decided to move back to the South. The cold NY winters were too much — who could blame him?

Dre doing what he does best: teaching travellers | Photo by Sarah Funk

While he was in New York, Dre wanted to live like the locals. Because of this, he never visited the tourist spots like the Statue of Liberty or Empire State Building. But after returning to Houston, he suddenly regretted not having those iconic Big Apple experiences. That triggered a sudden interest in learning everything he could about his own hometown.

So he decided to become a tourist in his own city. To learn more about Houston, he took an Urban Adventures tour. He was astonished to learn that he knew so little of the city’s fascinating history and underground tunnel system. He was blown away and wanted to share his love for Houston with others.

“I think the thing that most drew me to becoming a tour guide with Urban Adventures is how astonished I was with how much I didn’t know about my own city. I thought that I was mostly knowledgeable about the city I lived in. That couldn’t have been farther from the truth. When I went on my first tour and learned about the history, architecture and beauty here in Houston, I was hooked.”

“When I learned about the history, architecture and beauty here in Houston, I was hooked.” | Photo by Sarah Funk

From the moment you meet Dre, you can see his passion for Houston. Within minutes of connecting, he has surprised me with two facts about the city that truly humble me (especially as a New Yorker who often thinks she lives in the greatest city on Earth). Dre shares that Houston is the fourth largest city in the U.S. and the second most diverse, with 146 languages spoken there. With its diversity of people comes a variety of things to do and experiences to have. Whether you’re into fashion, music, art or crossfit, it’s all there.

As Dre and I wait for the other guests to arrive for our Houston art and architecture tour, he tells me about his background. Growing up an “oil brat” had its benefits, he says. Dre lived in cities all over the globe and learned the value of travel. But although Dre has travelled extensively, he believes there is no place like Texas. “I would call Houston home. It has my heart.”

His travel experience is also what partially inspired him to become a guide; he feels travelling is one of the greatest things you can do for your psyche.

“It opened my mind. I’ve been friends with people from all different belief points. In the end, it helped me understand that people, no matter their varied differences, are essentially the same at the core, and allowed me to be open to embrace people from all walks of life. It had the single most lasting effect on me.”

Have your Best. Day. Ever. with Dre in Houston | Photo by Sarah Funk

Dre was once the student on tours of Houston, but now takes the role of teacher. One of his favourite parts of guiding is sharing the same interesting tidbits that blew him away the first time he heard them. For example, did you know that despite its image as an oil city, Houston is eco-friendly with hundreds of miles of biking trails and parks?

One thing that’s obvious when chatting with Dre is his expertise in a variety of fields, and his passion for helping others to learn more about his city and the world.

“It’s cool to give tours to people from all over the world, and bond with others no matter who they are. Having a chance to showcase Houston’s beauty has been amazing. Who would have thought that you could get paid to talk about your city?”