Blog > From village fields to city tours: How a Bali guide found his way

From village fields to city tours: How a Bali guide found his way

Mangde’s tale begins in a remote Indonesian mountain village, where he farmed papayas and tended rice paddies. But where it picks up today, his story is quite different. A tour guide with Bali Urban Adventures, he is living in Bali’s largest city and meeting travellers from all over the world. But he still holds his past close.

Growing up in a small village as the youngest of seven siblings had its perks. Mangde was the baby of the family, and his older siblings cared for him. But when they moved out, it was left to Mangde to help his parents maintain the farm. In his village, farming was essential; it wasn’t just a source of income — it was a way of life, and ensured the community’s survival. But Mangde’s family also highly valued education, and even at a young age, Mangde was infatuated by the English language and hoped to learn to speak it with fluency. And so every day, he would walk the six kilometres a day to attend school in the mornings, and in the afternoons he would return home to tend to the land. 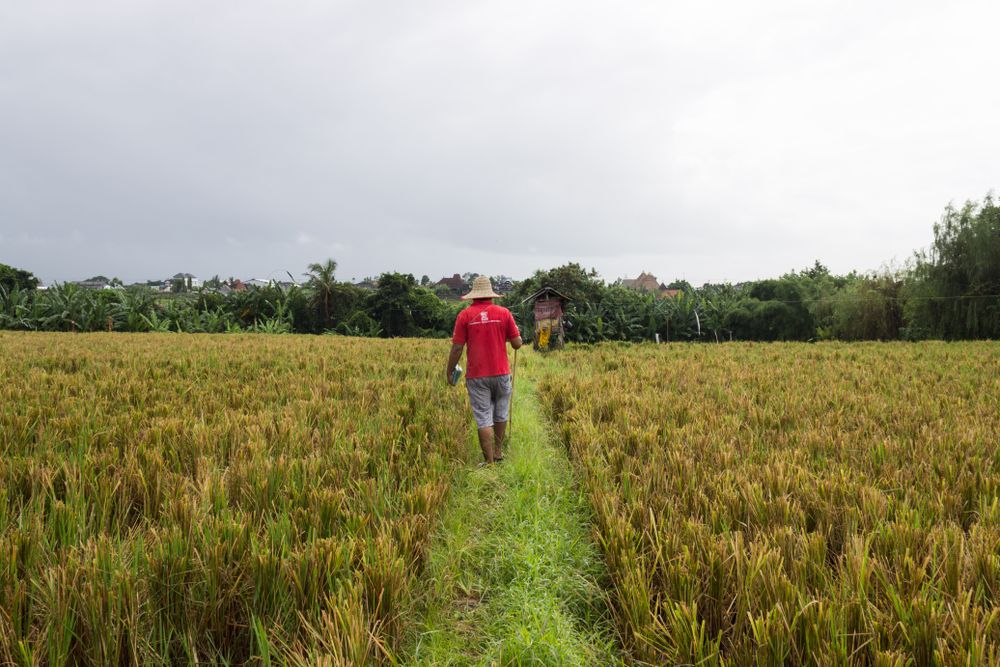 In many ways, his journey to a degree is more impressive than most Ivy League graduates, simply because of the obstacles he had to overcome and the internal drive he had to accomplish his goals.

Since there was no high school or college in his remote village, Mangde had to leave his family behind and move to Denpasar (Bali’s largest city) to finish school. A path he had to take alone, as his parents could not afford to leave the farm.

And because he did not come from money, Mangde had to be strategic. He made friends with other students and worked out an affordable housing option, then shared a bike with several friends. On the weeknights he would study, and on the weekends, when he saved up enough cash, he would head home to help his parents with the farm.

Mangde doing what he loves: teaching a traveller about his culture | Photo by Sarah Funk

Fast-forward to today, and Mangde is a proud father of three, living in Denpasar and guiding for a living. Now that he can support a family, he understands both the value and the temptations that success can bring. In his first three years of guiding, he was surprised to discover he had made enough money to build a house in the village.

At first, he let his monetary success guide his decisions, but quickly learned that money does not always lead to happiness. Today, he finds more value in caring for and helping others. Whether that’s in the form of information or bounty, he has a big heart for sharing and loves to give. Though he has moved from the village, he still keeps his past close to him by farming an empty lot across the street from his house. In his free time, he gardens, and tends to the lot growing papayas, tapioca and bananas, then gifts them to his neighbours and family.

During his work days with Urban Adventures, Mangde enjoys sharing his culture with visitors, and learning about theirs. For him, it is an ongoing education where the learning never stops. His favourite tour should be no surprise; it is the Hidden Rice Terraces Trek because it reminds him of home. During the hike, he teaches visitors the ins and outs of how a rice paddy functions, stopping along the way to highlight different plant life. For Mangde, walking through the field is, in many ways, similar to walking through his past. Only this time, he gets to share that past with guests as he teaches them about his beloved island of Bali.

You can take the boy out of the village but you can’t take the village out of the boy. In every step he takes, Mangde’s past is revealed a little bit more. This is what makes him — and the tours he leads — so special. His love for his home shines through as he guides, and into each story he tells.

Visitors to Bali have long been drawn to the stunning emerald terraces that were first planted by Hindu priests when they arrived on the island in the 9th century. Locals and visitors alike appreciate the beauty of these fields as they change seasons, from planting to harvest, and they offer up a serene, peaceful sight far removed from the bustling beaches of Bali’s tourist zones.