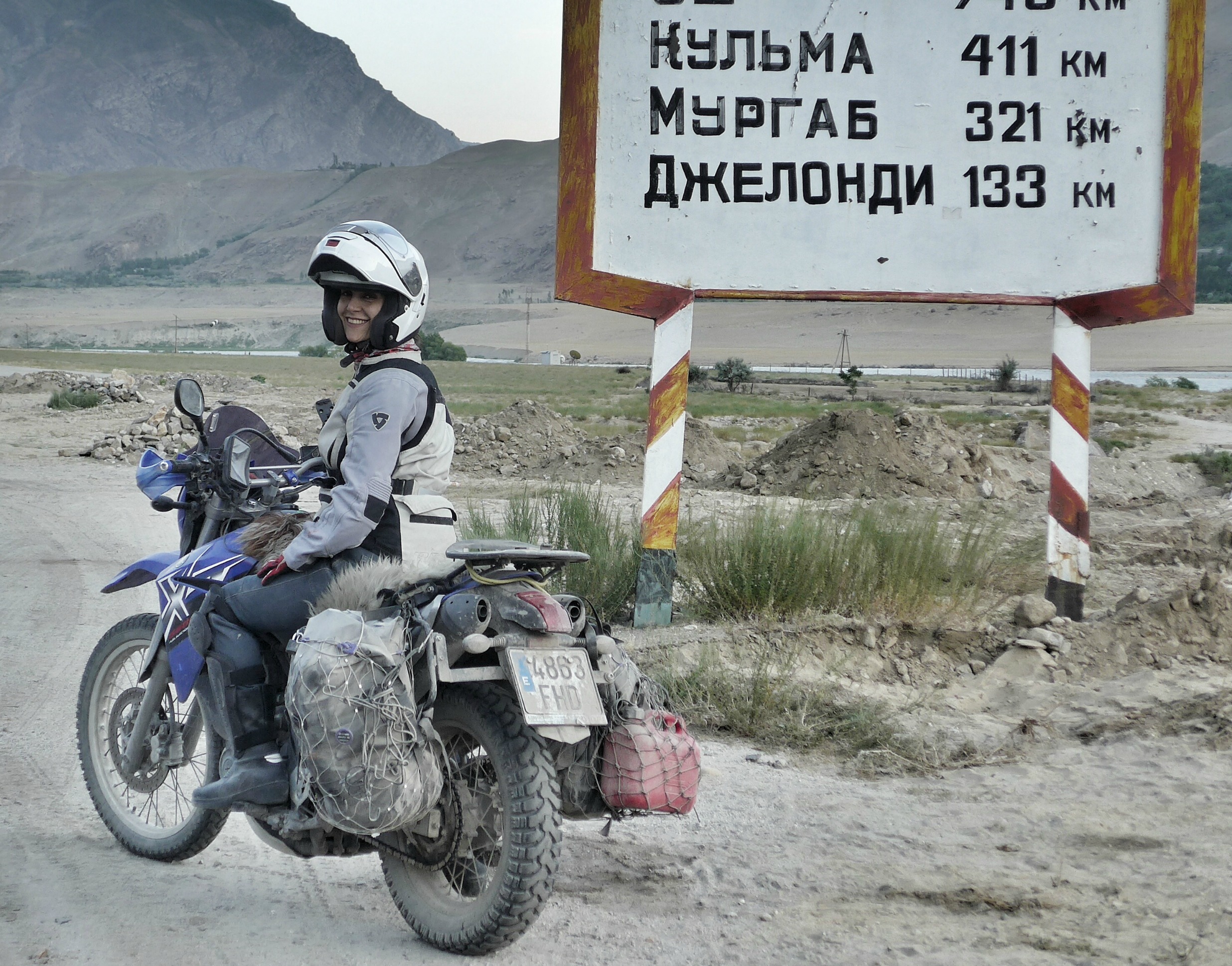 Most of us would assume that a motorcycle accident that left you with two broken legs would destroy any chances of you ever again wanting to climb atop a bike. But for Mahsa Homayounfar, an Urban Adventures partner operating in Seville, Spain, it made her want to hop back on and explore even more. With two wheels, she’s tackled months-long trips into regions such as South America and West Africa, and into countries like Morocco, Iran, Pakistan, and Sri Lanka.

On following your dreams:

“The Pamir mountain range is a very remote area, covering central Asian countries — Uzbekistan, Turkmenistan, Kazakhstan. They call it ‘the roof of the world’ because you’re always above 4,000 metres. And as a kid, I had this dream to go there but I never did it. After I recovered [from the accident], you know, I had this dream that before I die or before anything happens to me, I should do it. You know when you have a dream and you say, ‘I’ll do it later, the dream can wait because right now I have to work, or I have this or that to take care of.’ But that accident made me aware that sometimes you don’t have to wait, you just have to do.”

On conquering your fears:

“When you’re a girl, there are always men who will think they can try something. I was in Sri Lanka with two friends in nice bungalows by the sea, and there was a local guide who said he’d show us to a beach, and my friends said ‘yeah, let’s go.’ Everything was fine, but then at night he tried to break into my bungalow. He was drunk and was banging at the door. There were other people there sleeping, but I felt really unsafe. It felt very violent, like there were no boundaries. That stuff happens sometimes, but not that often, actually. It also maybe happens more to me because I’m quite friendly… When you look young and you are friendly and you smile, some people misinterpret that and think, ‘oh, okay, I can try something.’ But there are some easy things [to do to protect yourself]. You just say, ‘I’m married and I have kids,’ and it’s usually okay. My mistake was the guy asked if I was married or not and I said not because I thought it was safe since he was working.”

“I was in Mauritania — this is a country where there are stories of killed tourists, and Al Qaeda is there. I was there with an ex-partner, on motorcycles in the middle of the desert. And it was getting dark, and as a foreigner, you’re not supposed to ride after dark. You’re to stop in a city and either check into a hotel or go to the police station. I didn’t want to do that, I just wanted to camp. In a village, I asked — well, I tried to ask — the locals for water. But I’m thinking,‘It’s the middle of the Sahara and they’re not going have any to share, and we’re going to die.’ I said, ‘water, do you have water’ — I knew the word in Arabic for water — and they said, ‘Of course. How many litres do you want?’ It was rewarding because that was something I didn’t expect. They were genuine. They seemed happy to see me. They were like, ‘Here’s your water, here’s my house, if you want to take a shower, I’ll fill the shower.’ People really are friendly and will help you and share with you.”

On what travel can teach you:

“It’s a very democratic thing, travelling. You can be from a certain class or have certain habits, but as soon as you get on the road, you can meet the rich, the poor, the intelligent, the women, the kids. You see everybody… it’s about not just meeting people but learning about their experiences, how they live, what their worries are, what their problems are, how they handle the same situations as you but in a different way.”

“No matter where I go, I see that women really are repressed. It’s like a form of slavery. They are the ones that work, that do everything. Today I was riding through tea plantations, and it was hot and they’re very steep, and there were only female workers there, walking with heavy bags of leaves. No matter where you go, it’s the same thing. If you go to Vietnam, you see the rice fields and the women working; if you go to Ethiopia, you see the women carrying 20 litres of water on their heads. Even if you go to Spain or elsewhere, women work but they also take their kids to school and they make dinner, and it’s just constant work. And then on top of that, we have to be beautiful.”

“You have to develop your instincts, to know what, when, how, where. How to dress, what to say, what not to say. It takes practice. It’s like anything else — the more you do something, the better you get at it. Confidence in yourself and trust in others. It’s a basic skill you need to do anything. We can do a lot of things, and many times we can do them better or at least the same as a man. So many women are afraid. Where does this fear come from? Many times it’s a self-imposed limitation. It shouldn’t be. It’s much easier than that. Women should have faith in themselves.”

Read more interviews with our female guides and organisations helping to improve the lives of women around the globe in our special-edition digital magazine in honour of International Women’s Day.