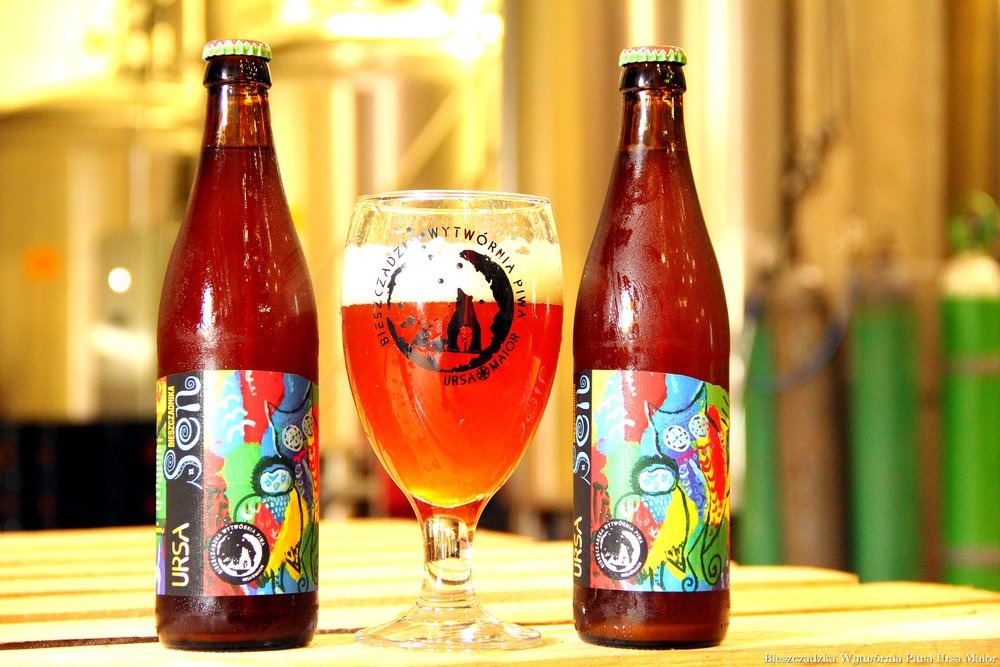 “Let’s reach higher.” That’s what Agnieszka Łopata and Andrzej Czech said to each other one day before they moved from the city of Krakow to the wildest Polish mountains, the Bieszczady, which run along the southeast of Poland through Ukraine and Slovakia.

After all, there could be no better location for a creative, environmental engineer from Krakow and a native highlander with a PhD in renewable energy to launch a brewery.

They followed a path shown to them by the Ursa Maior (Big Bear) constellation, which led them straight to a small, isolated village called Uherce Mineralne — where eventually they created a regional brewery named after that same constellation.

Of course, all this did not happen overnight. It took years of hard work and sacrifice. It’s hard to believe that these two enthusiasts went from living in a tent in 2004 to running a brewery. And back then, neither of them had even thought about producing beer.

Bottles inspired by the Bear | Photo by Ursa Maior Brewery

Historians say beer was first discovered by accident, in ancient Mesopotamia, and the same miracle happened with Ursa Maior. Agnieszka Łopata, the founder and head of Ursa Maior Brewery, started her beer adventure by buying a small brew kit for home production off the internet. Everything that happened later was a fairy tale and an avalanche of events. Domestic brewing in the bathroom and kitchen was so inspiring that after a few years, her brewing became the well-known Bieszczady Beer Factory, where the ancient song of the mountains can co-exist with modern brewing technology.

The rules imposed by the legendary Bear were, from the beginning, very simple: everything must be local and ethical. This philosophy is not limited to just brewing; even the beer boxes are made in a nearby mill with waste wood, and the property’s grass is left to grow freely so as not to disturb its wild inhabitants. Ursa Maior is also a promoter of local artists, especially those inspired by the art of iconography and mountain music, and hosts many regional initiatives from concerts to art exhibits.

Ursa Maior beer is a unique product made by passionate locals, and is strictly connected to the Bieszczady region. And while you can try it on location in the brewery, you can also find it in plenty of local shops around Poland — as well as in the Ursa Maior pub and store in Krakow’s Kazimierz district, where you can buy bottles inspired by the Bieszczady area.

Want to try it for yourself? Our Made In Krakow tour takes travellers to the Ursa Maior pub to sample some of their beers, alongside tasting boards. If you close your eyes, you’ll maybe even get a sense of the vast wilds of the mountains in every sip. Plus, part of the revenue from beer sales goes back to conservation efforts in the Bieszczady region. Beer with a story and for a good cause? Pour us another one, please.

Find out what other treasures you can find on a Made In tour!