Blog > Wall is (not) over: The story of Prague’s John Lennon Wall 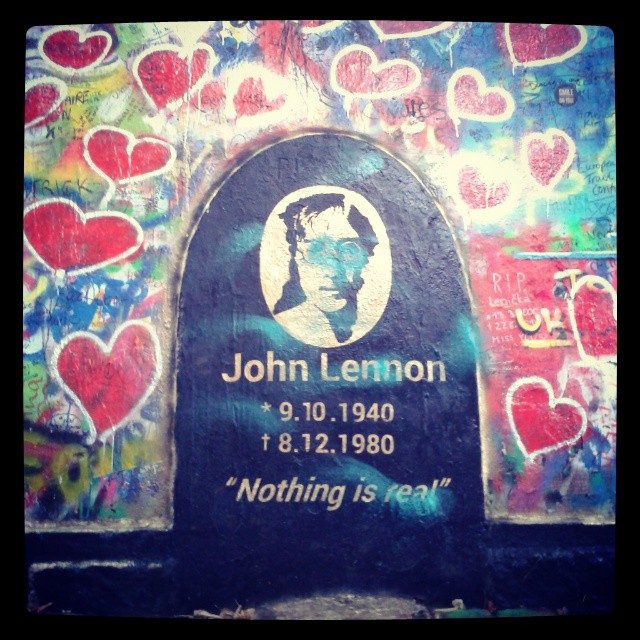 Wall is (not) over: The story of Prague’s John Lennon Wall

It’s November 17th and I’m walking through Wenceslas Square in Prague. Officially, it’s the square of a Czech patron saint, but more notably, it’s the square that served as the scene for soviet tanks rushing in and crushing the Prague Spring in ‘68. Then, 21 years later, it symbolised the keys of freedom being jingled by hundreds of thousands of people, as communist rule ended in 1989, in what was then Czechoslovakia.

The day is getting dark, but the square is starting to fill with candles and pictures of civil activist and former president Václav Havel. There are wet eyes and gentle smiles, and I can feel the togetherness and joy — the Communist regime was toppled exactly 25 years ago. My phone buzzed with an SMS from our lovely guide Tereza. “You are not gonna believe it,” she wrote. “Go see the Lennon Wall!”’

The wall, located across the river from Wenceslas and usually an explosion of colours, political messages, and images of Lennon, was totally blank. Well, except for one sentence scrawled on the white: “WALL IS OVER!” Even I was surprised at how much the sight affected me. Who did this? And why?

The writing’s on the wall

Back in the ‘70s, Czechoslovakia (as it was then) was in a decade of anesthesia. Attempts at reform were violently supressed in 1968 and, after that, many people simply settled to exchange their freedom for somewhat acceptable living conditions. The Communist regime installed by the Soviets pretty much dictated everything from the hairstyle you wore to the music you were allowed to listen to. You can imagine that Lennon’s music — and his long hair — was not on the list of recommended things to idolise. Many people say that the Czech habit of making jokes about everything, even things that are dark, is very much connected with that era of normalisation from 1968 to 1989 — it helped people cope with the absurdity of the times.

But there were also people who would not step down, who stood against authorities, fighting for their morals and human rights. For those people, especially among the younger generation, longed-for values like freedom and peace were embodied by John Lennon. Authorities, of course, didn’t approve — everything about Lennon was a bit too western for the Communist ideology.

When Lennon was murdered on December 8, 1980, young Czech citizens were in shock. They had lost one of their heroes, and wanted to keep his message alive. So they found their way into a relatively small and hidden square and started painting pictures of Lennon and his lyrics on the wall.

But then a game of cat and mouse began between the people expressing their political views and the police wanting to suppress it. The wall would be filled with colours, pictures, and messages, only to be painted over by the police — over and over again. People even gave a name to those who would bravely paint on the wall: they were called “Lennonists.” After the Velvet Revolution, citizens were no longer restricted from expressing themselves. As such, the wall was no longer whitewashed nor painted over by police. Instead, it became, as we call it, “the impermanent wall” or “the wall that is alive” because artists would paint over pieces and the wall kept on evolving. Even now, visitors to Prague find the wall and those of us who guide here visit it with travellers on almost a daily basis. And it’s always a joy to see how quickly it changes. “Look, did you see the new yellow submarine one?” “Wow, that Yoda painting is amazing!” “My latest favourite is the one with John and Yoko!” “That dedication for Boston Marathon was really beautiful!” We all have relationships with the wall.

But during the last few years, the quality of the art started to decline, as vandalism of the “I was here” sort (and far worse) started to appear. But even so, there is always something to catch your eye and fill you with awe. And the three men who play Lennon’s music there, no matter the day or the weather, ensure that there is always a good, sometimes even funky, atmosphere. During the summer, I recommend getting a few beers (from the nearby Pivoteka) and heading to the square, and sometimes you might find yourself witnessing some pretty impressive art being born.

So is the wall over?

No. In fact, seeing the wall whitewashed made many of us appreciate it even more, made it feel more current — which seemed to be the intention of the young student art group responsible for it. The group, known as Pražská služba, claimed their art project was intended to celebrate the 25th anniversary of the Velvet Revolution and “to provide free space for new messages of the current generation.” Even their word choice, “WALL IS OVER!” was a play on Lennon’s hit song Happy Xmas (War is Over).

So, far from being over, the wall is alive and well, and it was a joy to discover many local artists giving their best as they gathered to be among the first to revive it.

And a tip: If you are in Prague on December 8, please go to the square. You’ll witness something quite amazing.

Headed to Prague? Check out the local side of the city (and the John Lennon Wall) with one of our Prague tours.