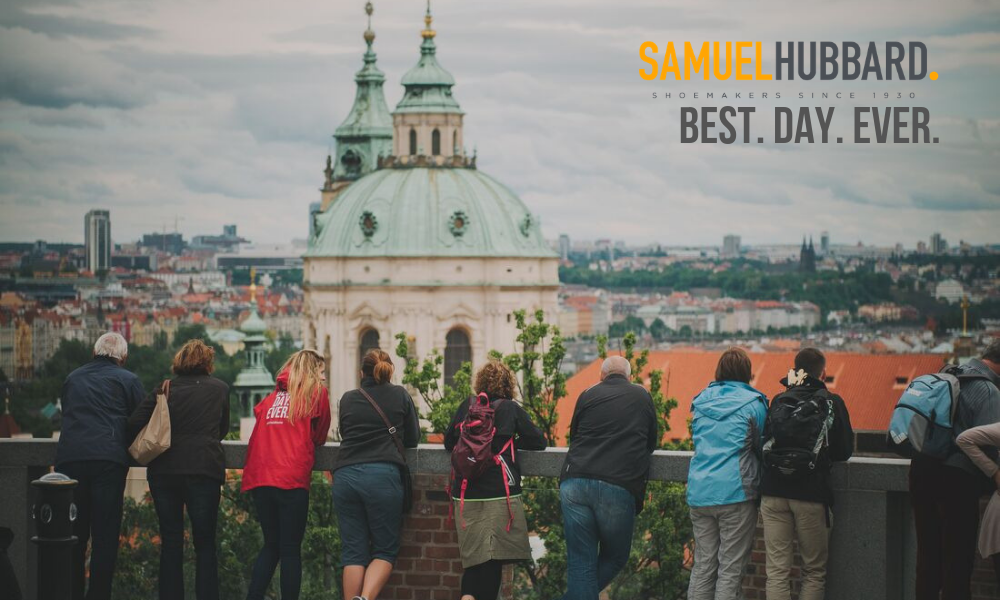 Yep, that’s right, we’re talking boats and boots and six hours spent uncovering the art, architecture, culture and world-famous beer of the Czech Republic’s capital, but first you’ll need to get your footwear sorted. We’re looking at Samuel Hubbard’s Uptown Mavericks for the fellas and Tailored Travelers for the ladies — they look good, they feel better and they’ll be up to the challenge of supporting you should you do as the locals do and get stuck into one too many absinthes or pilsners.

Prague is home to the biggest castle and the biggest club and the biggest population of beer drinkers in the world. Sounds like a fairy tale, right? Your Urban Adventure begins in the morning at the Municipal House, a stunning Art Noveau building in the city’s medieval Old Town. From here it’s a short walk to the Havelsky Markets, Prague’s original food and vegetable market, which dates back to 1232. Nowadays it can seem a little touristy, with souvenir shops as well as local artisan stalls, but it’s not hard to imagine the locals bustling about trying to nab the morning’s freshest produce.

Don’t worry if the markets are a little busy as there are plenty of winding alleyways to explore in Old Town, and every now and then you’ll be surprised by incredibly detailed churches and palaces in Gothic, Renaissance and Baroque styles. Take the Church of St Martin in the Wall, for example, a beautiful little Gothic number that’s been a welcome haven for the pious for over 500 years. A gargoyle in the shape of a little boy sits on top, and local legend says that he was once the mischievous son of a local widow who, when she saw him running around on top of the church, was so embarrassed she cursed him to turn to stone and, well, he did. Uncomfortable for her, certainly, but you’ll be standing in utter comfort in custom soles and memory foam. This is why we stick to walking on the cobblestone streets rather than the rooftops — you never know what might happen in this city, but with a pair of Samuel Hubbard kicks on at least you’re prepared.

A quick hop, skip or sensible stroll across one of Prague’s thankfully solid bridges will deliver you to Lesser Town, on the opposite bank of the Vlatava River to Old Town. Don’t let the name fool you, Lesser Town has plenty to offer despite Old Town’s famous reputation. Your Urban Adventure guide knows all the local spots and they’ll take you to a restaurant for a traditional Czech meal. And if you’re eating Czech food you’re cheering too because these Bohemians know how eat. You might be chowing down on steak tartare or a wiener or schnitzel, or perhaps you’d prefer a Czech dumpling, fried cheese or a potato pancake — there’s plenty to “Czech” out and dig into.

How are those shoes doing? Still laced up? And zipped up, if you’re rocking the Uptown Mavericks. And if you’re in the Tailored Travelers you don’t even have laces, which you’ve probably worked out already. How easy is this? It’s about to get easier too as we jump onto a 19th-century sailboat to cruise the Vltava, Prague’s premier waterway and the best way to soak up the magic of this stunning city. Sit back and sip a hot drink or chilled Czech brew (of course) as the Old Town grows older by the minute but no less impressive. Take a moment to remember Gaston, a 12-year-old seal that escaped from Prague Zoo during floods in 2002. He made it all the way to Dresden in Germany, about 120 kilometres away, before being found.

Stretch those sea legs back on cobbled land and maybe even shake a leg to one of the bands that often ply their trade in the area. Seriously, let it all out because it’s an easy tram ride up to Prague Castle, the final stop on your Urban Adventure. As mentioned, Prague Castle is the largest castle complex in the world and occupies 70,000 square metres and was founded over 1,100 years ago. No visit to Prague, nay, Europe, nay, the Northern Hemisphere is complete without wandering through its magnificent structures (in footwear fit for both a king and queen, may we add).

Your adventure comes to an end mid-afternoon after a hefty six hours of seeing Prague as the locals do. You’ll be satiated, both in the culinary and touristic senses, and best of all your feet will be feeling fresher than a young boy jumping around a church roof before being turned to stone — that’s pretty fresh. Your guide can provide you with plenty of suggestions on where to head next.