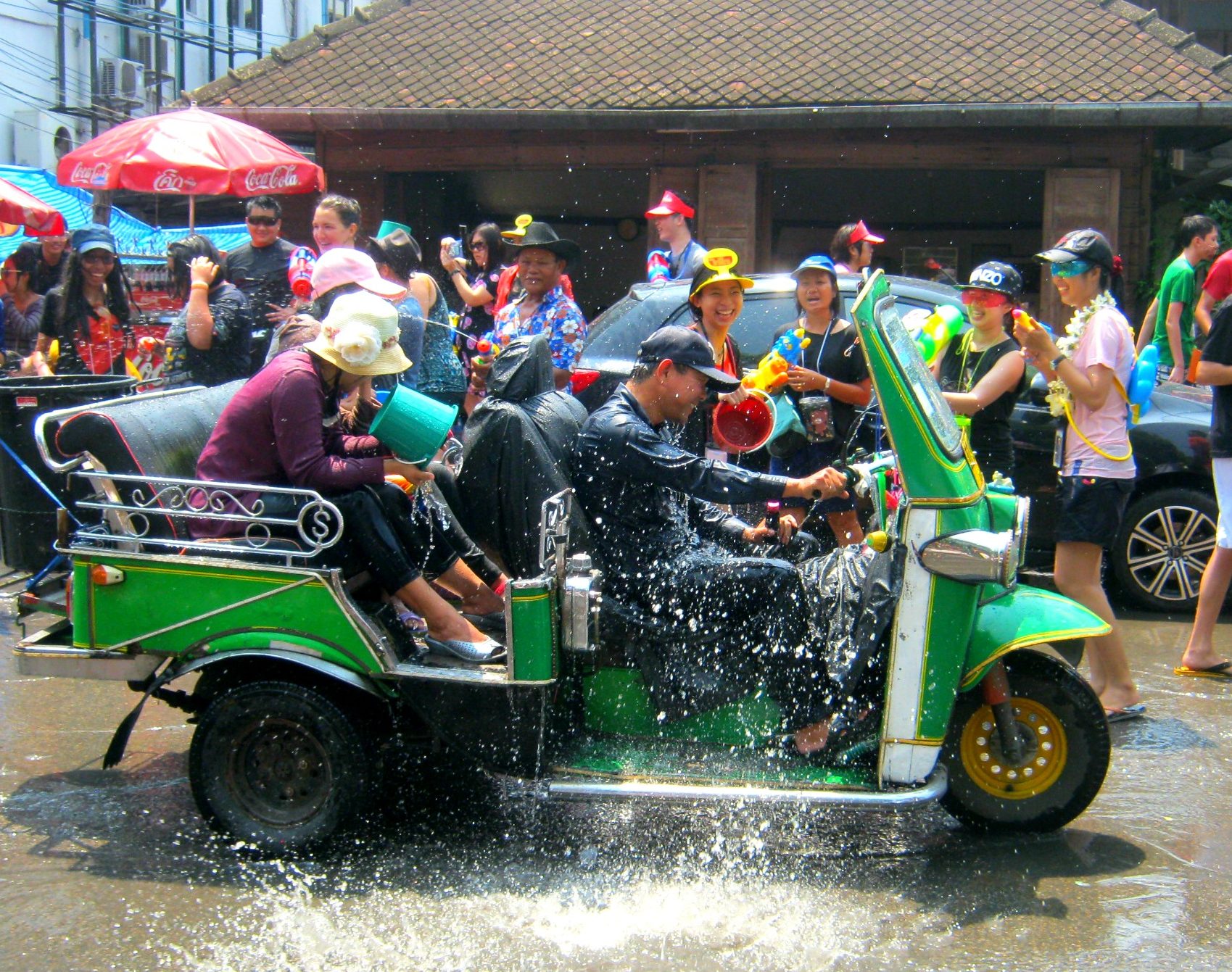 You’ve likely seen photos of it — even if you didn’t really know what it’s all about. The Songkran Water Festival is one of the most famous Thai celebrations and, at first glance, looks like nothing more than a wet and wild party. And yes, that’s kind of true, but the festival is also deeply rooted in tradition and respect. Songkran marks the Thai New Year, which happens from April 13th to 15th. The tradition of pouring water began as a symbol of cleansing the body and soul for the coming year, and a way to show respect to Buddhism, elders, families and friends. It started as a more gentle practice for good luck, but today has morphed into a no-holds-barred water fight in which everyone, from locals to tourists, get soaked head to toe in a riotous good time.

Activities start in the early morning, as locals prepare food to be brought to the temples and offered to Buddhist monks. Once the offering has been made, the tradition is to pass this kindness to your ancestors — water is poured from a brass bottle onto the ground or around a tree; as a child, my grandmother taught me that all trees carry an angel spirit that will connect us with those who have passed away.

From there, locals attend a temple ceremony in which monks chant and bless visitors with a sprinkle of holy water. As well, at the temple grounds, on a high altar, are several Buddha statues, which are bathed with the traditional Thai perfume of Naam-Ob and jasmine flowers.

Once the temple ceremony is over, the blessings turn to our elders. I remember, when I was 7 years old, my dad took my brother and me on the bus to visit his parents for Songrkan. We gathered with grandparents, aunts, uncles, cousins and new friends for this national family day.

My grandparents and other seniors in the family sat in a row, and the younger generations offered them gifts of new clothes (some families also give towels, soap, powders or perfumes), and bathed the elders’ hands with a bowl of water — in exchange, we all felt their blessings for us.

Chiang Mai is home to the most spectacular Songkran Festival in Thailand — millions of visitors come here every year for the New Year. Inside the old city and city moat, there are crowds of people, all walking up and down the road with a bowl and bucket of water and saying “Sawasdee Pi-Mai” to one another all day long. This is the real meaning behind Songkran: not just water fights, but happiness and kindness to all people.

If you’re headed to Chiang Mai for Songkran this year, here are some survival tips for joining the world’s biggest water fight:

You’re going to get wet. Very wet. So make sure you’re wearing clothes that aren’t going to bleed colour all over your body (or end up entirely see-through), that your camera is in a waterproof bag (or to be extra safe, just don’t bring it at all or invest in a waterproof disposable one), and that you’re not worried about hair or makeup (because it’s going to be a mess). Keep your cash and cards tucked somewhere safe in a plastic sachet and don’t even think about carrying unnecessary valuables with you.

Don’t try to escape the gushes of water heading your way, and certainly don’t wear a poncho or carry an umbrella. Not only are they going to do little to protect you, but you’ll actually make yourself a bigger target. The best thing to do is just embrace the fact that the moment you step outside your hotel or hostel front door, you’re going to get wet. Besides, since March and April are the hottest and driest time of year in Chiang Mai, the water is actually a welcome relief!

It’s going to be hot and you’re going to get wet, so best to wear something light, but not skimpy or see-through. Remember that Thai culture is quite conservative and this is a holy holiday, so avoid wearing thin tank tops or short shorts (especially as a woman; you’ll risk getting unwanted attention), and keep your feet water-friendly with sandals or flip-flops/thongs. For the most comfort, wear a bathing suit rather than underwear under your outfit. Don’t forget sun protection (sunscreen, sunglasses and a hat), water, and, most importantly, your water weapons! We’re talking water guns, buckets and bowls — all of them are fair game on the streets of Chiang Mai. You can refill them at free water stations and vendors throughout the old town and moat area. (#localsknow tip: Keep your eyes and mouth closed if you’re getting sprayed with moat water…)

At first it might seem like a free-for-all, but there are a few rules to abide by. Don’t bring out your high-pressure water gun. And while, yes, you’re guaranteed to get hit with a few quick blasts of ice water, don’t overdo it by pouring ice-cold buckets over people (that’s just mean). Don’t mix in talcum powder (yes, this is a thing — some people will add powder to their water supply so that it leaves a sticky paste). Authorities have banned the use of talcum powder in some areas, since it’ll cause sewer blockages, and there have been reports of men spreading the paste as a way to grope women. It may be permitted where you end up, but if you’re unsure, just avoid it. As well, be aware that alcohol can only be consumed in restaurants after 5pm — no boozing it up on the streets during the day’s festivities.

Since Songkran is a holiday, all the public offices — including banks — will be closed for several days. Because of this, sometimes ATMs will run out of cash. Be sure to get money out before everything shuts down, but don’t carry large amounts of cash around with you — as with any crowded event in any city, watch out for pickpockets.

Know where to go

The launch of Thai New Year in Chiang Mai happens at Thapae Gate, beginning at 6am with the offering of alms to the monks, followed by a parade, grand opening ceremony and the procession of Phrabuddha Sihing, which is the principal Buddha image, from Wat Phrasing. There’s also a cultural show and beauty contest that takes place in the evening.

If you’re up for a party, Huay Kaew Road along the north moat and towards Kaad Suan Kaew shopping mall is the young, happening place to be, featuring parties, events and concerts with famous local artists.

For just pure water-throwing chaos, spend your time within the old city walls and city moat — just be warned that you’re not going to get any kind of taxi within that area, so if you want a ride, it’ll be in an open tuk-tuk… and you’re going to get wet! Chiangmai-Lamphun road is another area with all-day splashing.

Remember, Songkran isn’t just about dousing your friends — there are also important religious ceremonies that take place as part of the festivities. Tourists are welcome at the temples, so be sure to watch and take part in the events. Just remember that you’re in a holy site and there are a few rules for behaviour: dress conservatively, do not touch anyone’s head (the head is believed to be sacred in Thai culture), do not point your feet toward Buddha or a Buddhist monk, remove your shoes before entering the temple hall, do not touch any of the monks, and avoid kissing your partner (or anyone for that matter!) until you’re off the grounds and out of public view. (And if you’re staying in Chiang Mai for a few days and would like to learn more about Buddhism, be sure to take our Chiang Mai Mind & Soul tour.)

Channel your chi on an enlightening Urban Adventures tour in Chiang Mai. Get to know the local monks and their culture, cruise down the Mae Ping River, or slurp on some soup, Thai style. Of all the things to do in Chiang Mai, these tours show you the local flavour of this incredible city in Thailand.