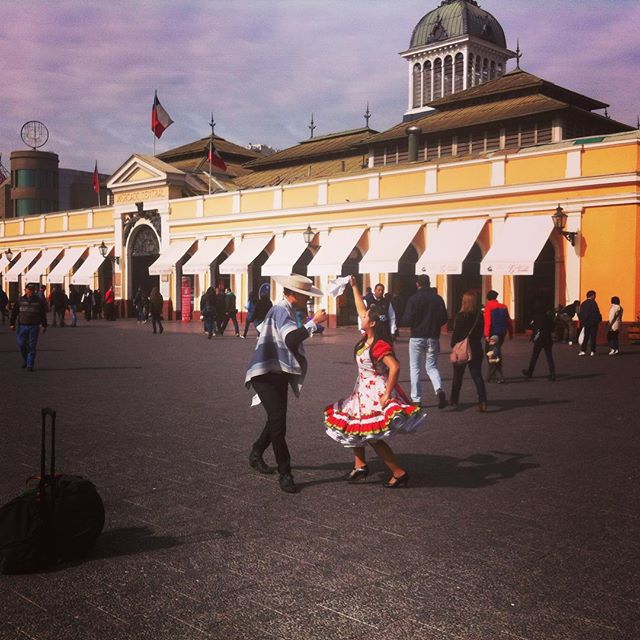 The complete guide to: Santiago travel

Travelling to Chile and checking out the sights in Santiago? This guide will give you everything you need to know about visiting the capital, from getting to and from the airport, to the best Chilean music you should listen to before you go, to the cool local events you should check out.

Getting to and from SCL

There are two bus companies that can take you from the airport to downtown (and back again): Tur-Bus and Centropuerto. Both operate daily from 6am to 11:30pm, year-round, and drop passengers off at various stations of the Metro de Santiago. A one-way trip costs CLP 1,600 (about USD 2.25), and a round-trip costs CLP 2,900 (about USD 4).

Buses from and to the airport stop at the following metro stations:

Alternately, you could hail a taxi. Taxis are available in the arrivals area, and there are counters where you can request a taxi service without needing prior reservation. There are two classes of service: basic taxis that are yellow and black, and tourist taxis, which are blue. Basic taxis operate with a meter (the meter should be visible to you, so you can be sure you’re paying the correct rate). Tourist taxis have set rates based on your final destination. Rates will vary depending on how far you’re going, but the approximate cost to the centre of Santiago is CLP 12,500 to 14,000 (about USD 20). Taxis are quite safe, but be sure to establish the expected fare before you get in the car, to avoid any potential scams, which can sometimes happen with foreigners.

You could also opt for a shuttle minibus. Transvip y Transfer Delfos are located in the central hall for both national and international arrivals They operate 24 hours a day, every day of the year. Public transit: There are several options for public transit. Transantiago is the main public transit system, with microbuses, commonly called “micros.” These are white and green that circulate along Alameda, Av. Providencia, etc. There are also feeder buses (in different colours) that connect with the periphery of the city.

The Santiago Metro is a five-line rail system that covers much of the city. In fact, it’s one of the most modern metro systems in Latin America (it’s the second longest after Mexico City, covering 103 kilometres!). The prepaid Bip card can be used on both micros and the Metro, and fares range between CLP 610 and 720 (approximately USD 1 to 1.40), depending on the schedule. With one fare, you’re allowed to transfer onto other buses or subway lines.  The Metro runs from 6am to 11pm.

As well, there are colectivos, which are an economical alternative to taking taxis. They have designated routes (which will be posted on the roof of the vehicle), with pick-ups at various Metro stations, and passengers can ride to anywhere along the route. The colectivos have fixed rates depending on the journey. A short leg costs about CLP 200 (USD 0.30); a long ride is about 250 (USD 0.35). A very long ride may charge up to CLP 1,000 (USD 1.50).

Taxi: The taxis in Santiago can be easily identified, as they are black with a yellow roof. They can picked up from anywhere within the city, or ordered via phone. Note that you cannot negotiate the price of a metered taxi ride, unless you’re hiring the car for a long distance to head out of town. All taxi rides have a basic fare of CLP 300 (about USD 0.50), plus about CLP 130 (USD 0.20) for every 200 metres of one minute of travel time. Be sure you can see the fare on the meter, as there are some drivers who try to take advantage of foreigners.

Walking: Walking is a great way to see Santiago and experience local life. While it’s safe to walk around the city, try to do so primarily in the daylight hours, and avoid areas that feel deserted. If you need to walk around at night, avoid going out alone.

Funicular: The funicular is an excellent way to explore Santiago. Hop aboard and ride to the top of the hills surrounding the city — something you simply can’t miss while you’re in town. Things to do in Santiago

Santiago’s sports scene makes the most of the surrounding hills, with skiing, mountain climbing, and trekking being popular local activities. But if heights aren’t your thing, locals are also big into football and various athletics such as swimming, yoga, and pilates. Of course, football (soccer) is the main event, as it’s Chile’s national sport. In Santiago, there are six stadiums where both national and international football matches take place. Ticket prices range anywhere from CLP 70,000 (about USD 100 dollars) to, yes, CLP 427,000 (about USD 600). You can get tickets from tuboleta.com or ticketbis.com.

Throughout the year there are countless musical events in Santiago that show a great diversity in genres, with something appealing to pretty much every audience. The biggest music festival in Santiago is Lollapalooza, which takes place in Parque O’Higgins every March. Ticket prices are around CLP 61,500 (USD 86), and can be purchased from puntoticket.com and tuboleta.com.

Looking for more things to do? Urban Adventures offers day tours in Santiago, all led by local experts that will give you a taste for local life in Chile:

A Bite of Santiago
We’re turning you into an honourary Santiaguino on this city tour that takes you inside local life! Hop onto local transit and discover the best places to eat, the best sites to see, and the best spots for just hanging out.

Santiago Nightlife Adventure
Sips, Spanish, salsa, Santiago! Si! Head out on the town for a night to remember. Sip Santiago’s favourite drinks in local bars, learn how to order in Spanish, and indulge in the city’s vibrant salsa scene — you’ll be a fly-by-night Santiaguino in no time!

Santiago Private Tour
Put our team of local experts to work to build the perfect Santiago itinerary just for you. Let our team of expert locals know your interests, and they’ll come up with all kinds of ideas!

Santiago on the big screen

Machuca is a Chilean film, directed by Andrés Wood, that tells the story of two children during the government of Salvador Allende, with Santiago as the stage. It’s worth a watch to see a city in transformation, just opening up to a more cosmopolitan way of life.

An album that will get you in the mood for Santiago and Chilean culture is the 1969 album, Pongo en tus manos abiertas by Víctor Jara. Much of the album tells the story, and conveys the mood, of historic fights by the Chilean people for equality and justice.

A great book for getting a taste of Santiago is Contigo en la distancia by Carla Guelfenbein. The book takes place in Santiago and recounts the stories of three generations, tied together by a secret. What’s on in Santiago

For the most complete listing of what’s happening in and around Santiago, check out 800.cl.

For more info on Santiago, or to book a tour, give us a ring at +56 988 816601. You can also email us at info@santiagourbanadventures.com, friend us on Facebook, or follow us on Instagram.