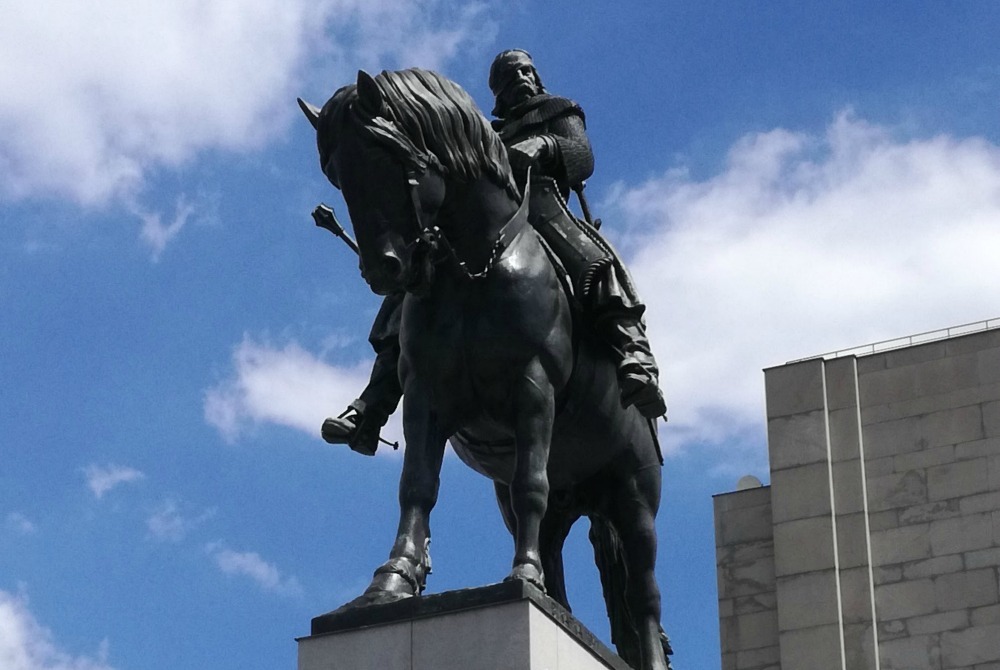 The legend of Prague’s one-eyed general

“The one whom no mortal hand could destroy was extinguished by the finger of God”.
– Unknown, upon the death of Jan Zizka by the plague.

Sitting on a hill overlooking Prague is one of the largest equestrian statues in the world. Jan Zizka (1370-1424), the one-eyed general.

This is the kind of guy you do not want to make angry.

A bit of background. He was the Chamberlain to the Queen of Bavaria in the early 1400s. In 1410 he fought against the Teutonic Knights in the Battle of Grunwald, considered one of the largest battles in medieval Europe. This is the first we hear of him on the battlefield. A bit more info: his main weapon was a mace and he was 50 years old at the time. I think that speaks volumes about the man right there.

As for religion, he followed the teachings of Jan Hus. To be brief, Hus continued the teachings of John Wycliffe who was known as the “Morning Star of the Reformation.” In other words, a form of protestantism a century before Martin Luther. Jan Hus felt the bible should be read by everyone, that the Pope was human and therefore could be wrong at times and the church should not sell indulgences, as well as other points made by Martin Luther almost a century later. In fact, Martin Luther would comment on how alike he and Hus were.

Why I mention Hus is because in 1415 he was burned at the stake by the catholic church for what he believed. This made Zizka mad. Remember when I told you that you don’t want him mad at you. This is what happens.

The first Bohemian rebellion was basically a war between the catholic and hussite. The catholic army was well trained and financed. The hussite, mainly common men and women. Zizka realized they had two skills he could transform: they used a flail in the field and they drove wagons. He had military style flails made and used. The learning curve was far less than training to use a sword. He also created a war wagon.

So, let’s take a ride in this hussite war wagon.

It was manned by about 20 people. His army had men and women who fought side-by-side. The wagon could raise a panel in case arrows were fired at them. Pikemen to keep the enemy at a distance, bowmen for the same. He also used hand cannons, basically a very crude shotgun firing stones, and he is one of the first to use small artillery guns against cavalry. The wheels were iron-rimmed and a low panel covered them from damage. The front wheels were slightly forward of the wagon so, if needed, the wagons could be chained together. After destroying an assault, his infantry would come from behind the wagons to attack the disorganised aggressors. If you have ever seen a wild west movie where they circle the wagons, this is a Zizka technique.

He is known as the one-eyed general due to the loss of an eye (I know, obviously). Some say it was from the Battle of Grunwald but many historians say it was lost when he was a child. Somewhere in his battles he lost the other one to an arrow injury. Even injured he continued to lead his men. At one point he and his men were ambushed. He got his men out of the situation, turned around and ambushed the army that originally ambushed him. This goes to show his leadership skills as well as his tactical abilities. With battles like this his reputation grew. At one point, upon hearing that Zizka was approaching, an army tried to break camp quickly and accidentally set the camp on fire.

His death finally came, not from a battle but from the plague.

Legend has it that on his deathbed he requested his skin be made into drum heads so he could continue to go into battle with his men on the war drums.

For a more comprehensive view of his life and times, I suggest a great book by Victor Verney titled Warrior of God. I’ll also be more than happy to give you recommendations about Prague’s Žižkov neighbourhood — which, you’ve guessed it, was named after Jan Zizka and has his stubbornness and determination in the veins of its people and its streets. You can also join me on our Prague Discovery Tour, where, besides other things, we can talk about this one-eyed General. Because believe me, there are more stories to tell.

Enjoy the ‘Greatest Hits of Prague’ on this Prague city tour. Food, icons, sailing, and beer – it doesn’t get more Czech than that!