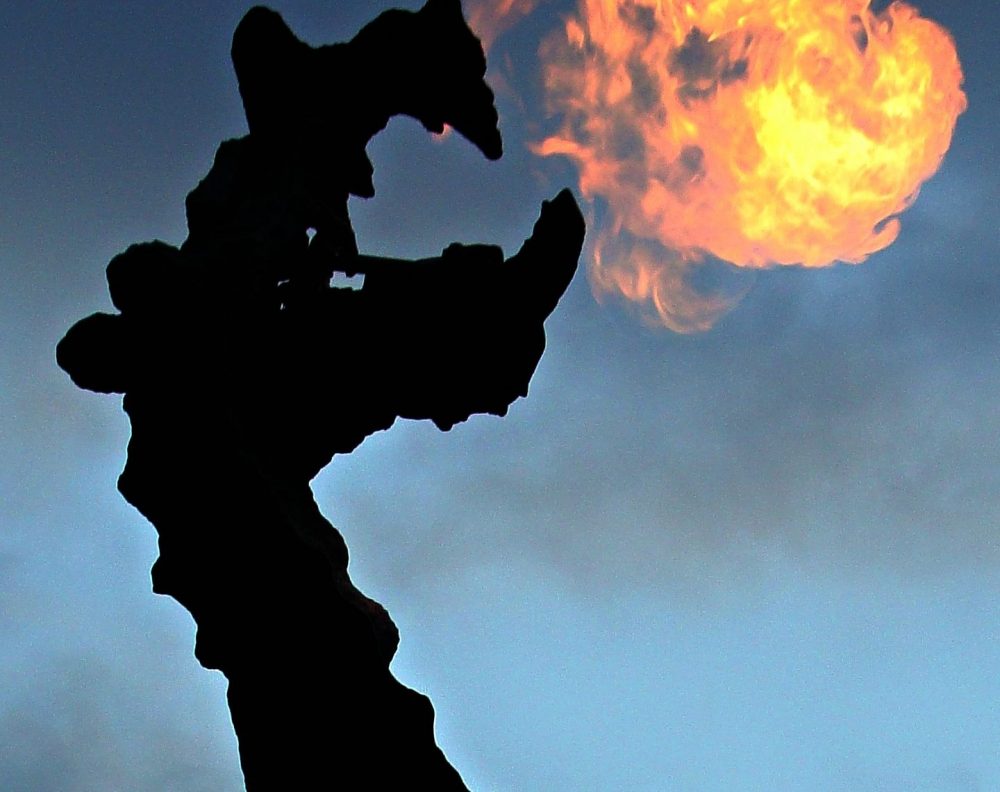 The legend of Krakow’s Wawel Dragon

Do you know the most famous story in all of Krakow? It involves a tale of a poor man who was brave enough to save the Duchy of Krakow with his creative idea and a hint of alchemy. Our story even answers the question of why Poles don’t like to drink water while eating…

Back in the mid 7th century, in the time of the legendary Prince Krak, the prosperous Duchy of Krakow was going through one of its worst moments. Imagine being so afraid to leave your home and shaking every time you hear the screaming roar of a dangerous dragon. This beast, which lives in a cave at the bottom of Wawel Hill, looks to feed every single morning and kidnaps women. The prince knows that none of them ever came back alive. He also knows the city will be completely destroyed if the dragon does not kidnap a new woman every week.

Forced by circumstances, Prince Krak creates a cruel lottery every seven days to elect a new victim. All the citizens wait in their homes, their heart in their mouth, for the announcement from the Prince’s court. Who will be next? Which household will be mourning forever? Desperate to rid the city of the dragon, Prince Krak offered money for killing the beast. But nobody could help, the dragon was always the winner.

Eventually, Krak’s only daughter, the beautiful princess Wanda, was selected. Not only was the prince distraught with the election results, but also the whole Duchy was in despair. This time Prince Krak promised half of his land and hand of his beloved daughter to the brave knight who could kill the dragon and save the Duchy.

City of Krakow | Photo via Piaxabay

Over the next two days, a never-ending procession of armed knights and nobleman came to Wawel Hill to fight with the beast. None of them could kill the dragon. In the early morning of the third day, Krak had to make a painful decision. He announced that enough innocent blood had been shed and the only way forward was to offer the life of his daughter. At dawn, a sad procession marched towards the dragon’s cave. Beautiful Wanda, dressed in a white dress decorated with fresh flowers, was at the front. She was serious, but calm. Nobody could see any signs of fear on her beautiful face. Her father was far from at peace. It was sad to see this powerful man and strong ruler of the country in such a deep despair.

The prince knew that he was about to lose his beloved daughter, but he couldn’t accept it. Each step towards the cave was hard for him and the other citizens who came to say a last goodbye to Wanda. Ten steps, nine – the princess turned her head and looked at the castle for the last time. Eight, seven – she came closer to the Vistula River and took a deep breath, as if she wanted to remember its smell forever. Six steps, five – she turned to the people, hugged her father for the last time and with her hand ordered everyone not to follow her. Still calm, Princess Wanda continued alone towards the cave. Four, three, two more steps towards the end of her life. The people watched the princess entering the dragon’s den. Soon, they heard screams and started crying thinking it is all over.

Believe me or not, but they were wrong.

Instead, Wanda ran out of the cave with a young man. They gathered the others to the river shore to show them pieces of the dragon.

You probably want to know what happened. This shy man, called Dratewka, had a great idea and he saved Wanda’s life before she even saw the dragon. He defeated the dragon not with arms, as he was a poor shoemaker, but with his big heart and open mind. Dratewka had killed a sheep, removed all it’s guts and instead replaced it with sulphur. He sewed up the skin of the sheep and left it as a tasty morsel in front of the dragon’s den.

In the morning, the awful creature saw the sheep and without thinking, ate it rapidly. Sulphur started to burn the dragon’s guts, so he ran as quickly as he could to the banks of the Vistula River to drink water. He drank so much water so quickly, eventually the dragon broke into pieces.

Dratewka was beet red as he explained to the crowd and the prince how he had tricked the dragon. Prince Krak hugged the man, Wanda kissed him twice on each cheek, and the grateful people carried Dratewka all the way back to the castle.

Perhaps you’re thinking Dratweka and Princess Wanda soon got married and lived happily ever after. However, nothing like this happened. Their luck was quickly interrupted by the invasion of German tribes. But, as they say, that’s a story for another day.

Today, a statue dedicated to the Wawel Dragon sits at the foot of Wawel Hill and visitors can visit the dragon’s legendary cave. Listening to this legend from our childhood, we Poles are always afraid of drinking pure water. We know that it can bring bad luck if drunk in big amount.