Blog > Things to do in: Krakow 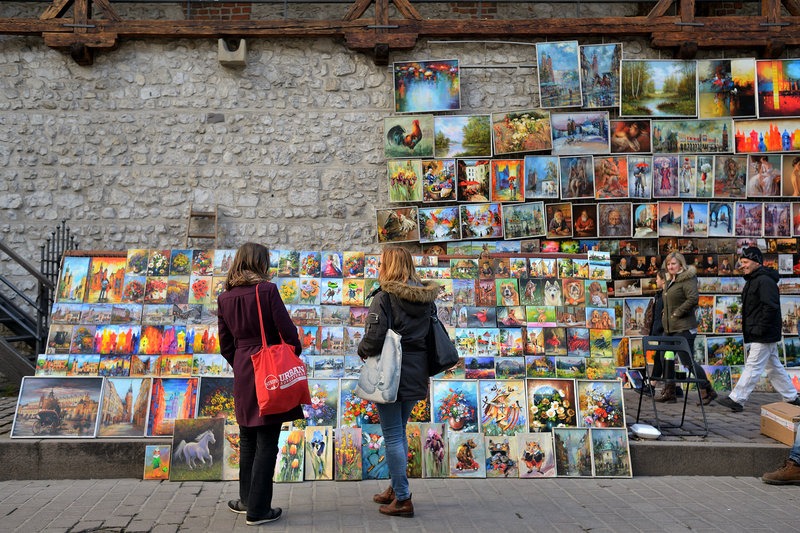 Things to do in: Krakow

Monika Prylinska
Europe
Krakow
Poland
Things To Do In

Done all the major sights in Krakow, but still have a little time to kill? That’s where our locals come in handy. Check out these tips for the best things to do in Krakow, local style!

Catch a panoramic view of the city from the Krak Mound

The Krak Mound is the oldest man-made monument of Krakow, and is said to probably be a symbolic tomb of Prince Krak (the legendary founder of our city, thanks to whom we named it Krakow) and was built around the 7th century by the prince’s loyal subordinates after his death. But some other scientists are convinced the construction is actually part of a huge astronomical observatory, made by Slavic tribes. Still others are trying to connect it with the pre-Christian cult of the Sun and the Oak Tree. No matter the real story, there is something magical here. From the top of the Krak Mound you can see the whole city — not only famous sites like the Wawel Castle and Wawel Cathedral, but also the whole huge area of the Nowa Huta communist district in the distance, and, situated at the bottom of the hill, the Podgórze district, which, together with the old quarry, was used by Steven Spielberg in Schindler’s List. (There are now fragments of film props hidden deep in the bushes). The whole place is extraordinary and makes you feel like more like an explorer than an ordinary tourist.

To get here, take the tram from the city centre to the right bank of the Vistula river, and get off at Cmentarz Podgórski (Podgórze Cemetery). Continue for a few minutes on foot towards the green area — the Krak Mound will be visible in the distance. Don’t forget to take your camera! Good walking shoes are also handy, especially after rain or snowfall, as it can be slippery while climbing the hill.

Step back in time in the Nowa Huta Communist district

Go by tram from the city centre to the Plac Centralny (Central Square) and walk among monumental buildings to admire the place where time stopped many years ago; visit the ideal communist city, the original gift of Josef Stalin for our country. 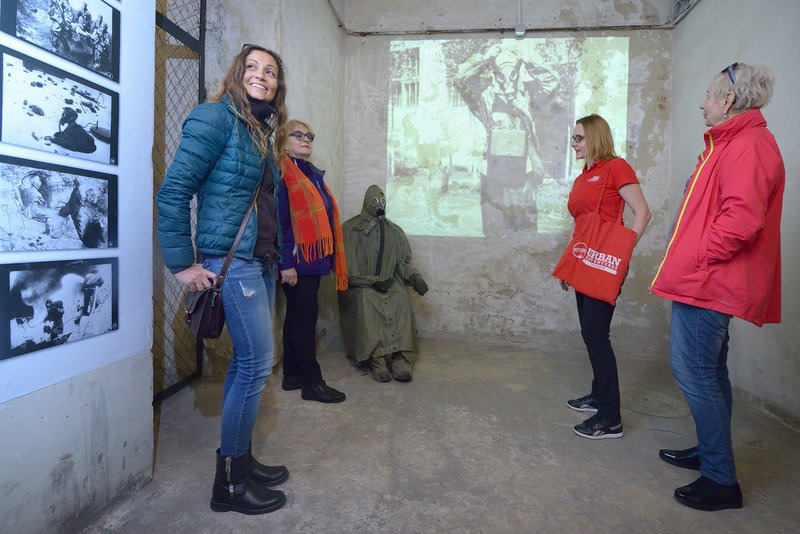 Step back into Communist times | Photo by Krakow Urban Adventures

Almost everything in this neighbourhood feels like a piece of the 1950s, when the district was created around a big steel factory, given to Poland by Stalin, the “friend of the Polish nation.” You will see many fully equipped housing units for factory workers, bunkers made to protect citizens against an American atom attack, old tank and restaurants (which are still serving vodka with herrings or vegetable salad). The only thing missing is the huge monument of Lenin, once visible at the main avenue but removed after the end of the Communist regime. One extra bonus about the removed statue is that today, at Christmas, we have put a big, beautifully decorated Christmas tree in that spot.

Find some quiet at the Botanical Garden

A short walk from the city centre is the Botanical Garden, situated at 27 Kopernika Street (15 minutes walking from the Main Market Square of Krakow). Forget about the outside world and surround yourself with nature of all kinds and varieties. Bring your camera and snap a few photos in the greenhouse, visit one of many themed exhibitions, or just sit with your favourite book at the bank of a picturesque lake and recharge your batteries.

The garden is a huge green area with more than 5,000 kinds of plants from around the world, and even though it’s located very close to the busy city centre, it is completely quiet.

Note that the garden is only open during the summer season from late April to late October. Ticket prices are PLN 9/EUR 2.5.

Visit the Zablocie district and get cultured at MOCAK

Usually people are in the Zabłocie district only to visit the famous Schindler’s Factory Museum, but believe me, this place has a lot of other things to offer. In addition to this widely known WWII museum, there is also MOCAK (Museum of Contemporary Art in Krakow) — a great, modern building filled with a huge collection, including temporary exhibitions and interesting lectures. Close to the main entrance of the museum you will find a small, friendly café (so different from the awful one in the nearby Schindler’s Museum), as well as an amazing bookshop and well-equipped art library that’s really worth visiting. 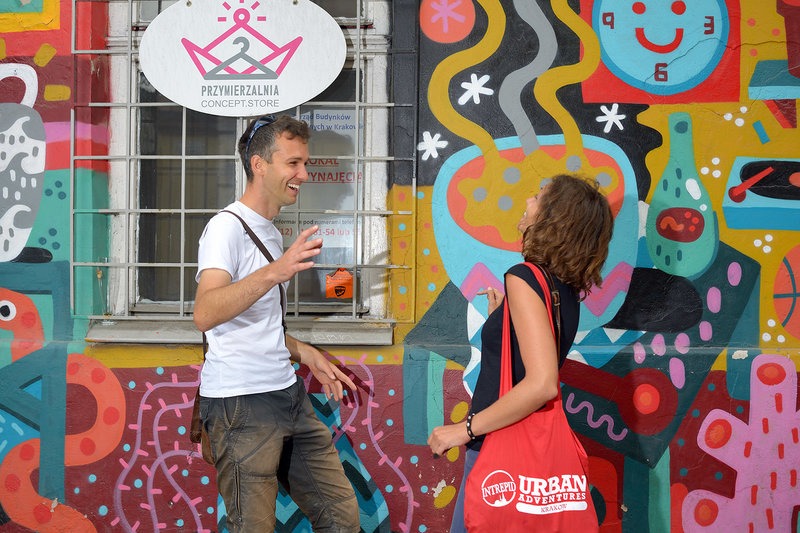 The Zabłocie district is also full of old, neglected factories, which have been changed recently into alternative bars or lofts, walls for imaginative murals, and quirky offices where it seems every single day there is a new start-up on the horizon! It’s a great place to feel the vibrant energy of a young, new generation of Poles born in a democratic country.

For the best food shopping in Krakow, we recommend the Stary Kleparz Market, located very close to the Old Town, just north of St. Florian’s Gate, between Matejko’s Square and Dluga Street.

Having run since the 18th century, this is the oldest and most colourful market, where farmers bring fresh fruit and vegetables to sell daily, and for quite reasonable prices, too. You will always find locals here looking for good bargains. Try some samples, such as fresh mountain cheeses: oscypek and bundz, famous Polish sour cucumbers or sour croute, locally made sweets. As there are some expats in the city, Kleparz also offers small shops selling typical Hungarian, Italian and even Arabic foods. Do not miss this place as they have great decor, good prices and fresh coffee that smells like heaven.

Kazimierz is a busy district known by tourists for its well-preserved Jewish monuments, but also among locals because of its lively bars, pubs and art galleries that are seemingly all over the place. 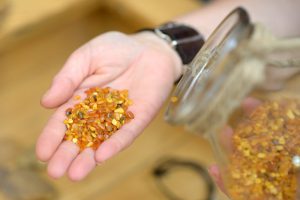 Can you spot real amber from fakes? | Photo by Krakow Urban Adventures

Here you’ll find here colourful murals and wall paintings, small restaurants and interesting art galleries showing exhibits by local artists. My favourite right now is the Qubic Art Gallery, located at 20 Dajwor Street. It’s run by a charming woman named Malgorzata Stawniak, who knows everything about Polish “gold” — also known as amber. You can listen to her amber stories while drinking coffee and eating homemade cake, as well as admire (and shop for!) beautiful jewellery made by her. (Pssst, you can also meet her on our Made In Krakow tour, which takes you into the shops of local Krakow artisans!)

With a bit of luck you can also attend some good jazz or blues concert in the same area, but there is no info about it anywhere so keep that tip for yourself as a #localsknow secret…

For even more cool local knowledge in Krakow, have a browse through our unique Krakow tours, led by a local guide.

Walking through Krakow is like strolling through your very own open air museum. Around every corner you’ll find something of interest, whether it be a beautiful building or a cool food truck selling traditional Polish fare. Get to know the local way of life in this gorgeous city on a Krakow tour filled with history, culture, food, and even a bit of local lingo if you’re looking to learn it!