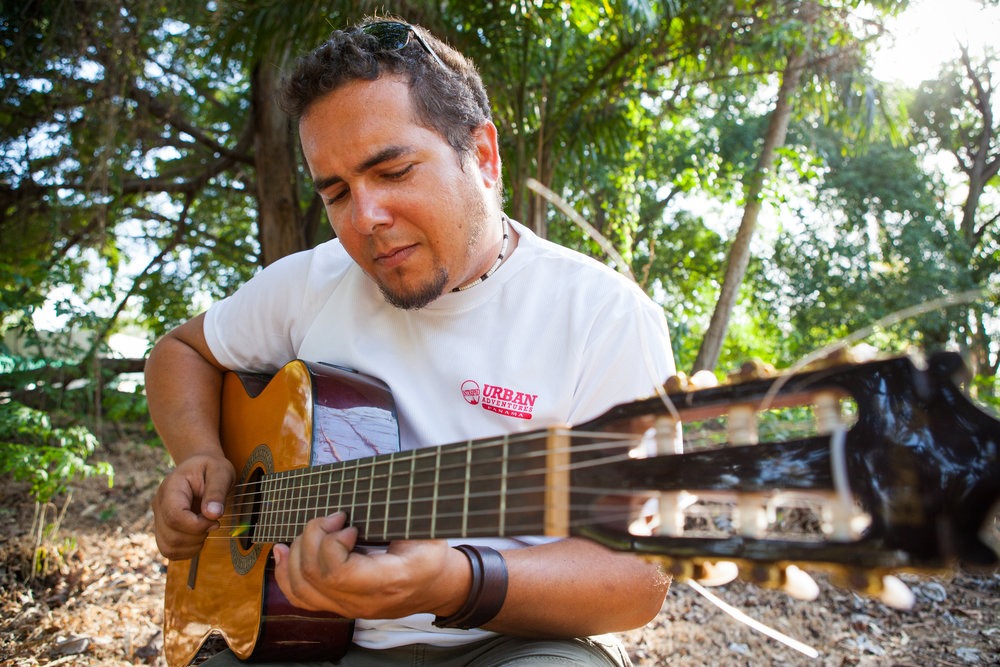 This tour guide is one of Panama’s best guitar players

When Gonzo was 14, he was just a kid who loved to rock. His dad had gifted him a guitar when he was 10 years old and by the time he was 14, he had played his way into a local rock band in Colon, Panama. “I didn’t like the music, or the name of the band, but I was playing in a rock band and that was good enough for me,” Gonzo says with a laugh.

Gonzalo Horna, now a tour guide with Panama City Urban Adventures, grew up in the town of Margarita, on the Caribbean side of Panama, near Colon. The community was one of the US army bases, set up to build the Panama Canal, so there was a very strong American influence. This influence inspired him to learn English, which he now speaks fluently. In fact, you can barely pick out a Spanish accent at all, and I’m trying during our interview!

The army base near his home that had a youth centre where Gonzo and his siblings had permission to go play sports, ping pong or just to hang out.

“I remember my first time playing soccer with the league from the army base. I was very excited to have my first soccer uniform and was so proud. When my mom dropped me off, I ran out to the field with all of the other kids wearing uniforms and they were talking [English] gibberish. I knew there were other languages, but I was dumbstruck and fascinated when I heard it for the first time from kids my age. From that moment on, I was motivated to learn English.”

Being the only Panamanian on his team, he was immersed in the language for team practices and after game get-togethers. When he turned six, he attended a fully bilingual school. Outside of school, he watched The Price is Right every day on the Southern Command Network, the US channel that was broadcast on Panamanian TV.

By the time he was 10 and taking an interest in music, he was already listening to the top international hits, alongside his mom and dad. Gonzo remembers his early music influences, “My mom was a fan of the Beatles and Abba. My dad had mixed cassette tapes filled with Tina Turner, Stevie Wonder and Lionel Ritchie.”

“All night long. All night. All night long.” Gonzo belts out the lyrics to Lionel Ritchie’s famous song, and as I have a soft spot for Ritchie, I just let him sing away.

“You know,” he says, “the first song my guitar teacher taught me was Ob-la-di, Ob-la-da by the Beatles.” He pauses for a moment and then continues with a chuckle. “I asked to learn Guns n’ Roses next. From the time I started playing, I just always knew that guitar would be a big part of my life and I would be a rocker.”

At 14, Gonzo auditioned for a rock n’ roll band called Kriterio Formado, based out of Colon. The next thing he knew he was playing gigs in local bars and occasionally touring the country. “We even recorded a CD,” Gonzo recalls with a shake of the head. “It was a lousy band, but I learned a lot from them and the experiences. When we went to record our CD, we did it in two weeks straight, in Panama City. None of us knew any better, so we just went to the studio every day and pounded it out.”

Local guide Gonzo and his guitar | Photo by Shari Tucker

By the time he was 18, Kriterio Formado, was disbanding. The other members were settling down with families but Gonzo was just getting started in his music career. He moved to Panama City to study music and continued to play with others as often as he could.

When a contest came up to find Panama’s best guitar player, Gonzo took to the stage — but wanted to do something different. “Everyone else was showing off their skills with electric guitars and shredding. I showed up with my acoustic guitar and jammed. I showed my skills as a band member, not just a guitar player, and that I could entertain.”

His talent and attitude won him second place, and he met Panamanian singer-songwriter Yigo Sugasti, who was interested in collaborating with him.

Gonzo chuckles as he recalls meeting Sugasti, “I was just this guy that played guitar in rock bands and wrote songs. That’s all I knew. I had no idea what a singer-songwriter was until Mr. Sugasti told me that’s exactly what I was.”

Not long after meeting, he and Yigo started working on a compilation tour and CD of Panamanian artists. After that, they co-founded a not-for-profit organisation called Tocando Madera, to help Panamanian singer-songwriters get recognition. The organisation has helped to send artists all over the world and also invites artists from other countries to play in Panama. Gonzo is still actively involved as a liaison and musician to the organisation that has now been operating for more than 10 years.

As for how he ended up in tourism, well Gonzo’s experience working with tourists goes back to his family, who had a lodge in the middle of 300 acres of tropical rainforest. In his 20s, Gonzo took a break from city life and the music to scene to help his family run the lodge.

“It was a daily struggle, as living in the jungle is no easy feat. Long days and lonely nights led to staffing difficulties. So, I went to help my family,” he explains.

Gonzo stepped in to manage the lodge for a couple of years, until sadly, they had to shut down their family-run tourism business. “After work there is no one to talk to, so you start talking to yourself. Most people aren’t ready to deal with themselves and simply break under the stress of existing. We just couldn’t keep good quality staff in the middle of the jungle. It can do that to a person…” he trails off.

When I ask him how he stayed sane, he explains that he spent his downtime playing music and writing kids’ songs.

“Kids songs?” I ask. After all, this is a guy who randomly belts out Lionel Ritchie and was excited to learn Guns n’ Roses as a youth.

“Yeah, well I figured that most Spanish children’s songs were very religious or very conservative, to the point that kids of divorce have an awkward time singing along because at some point the song implies mom and dad should be together, but that’s not always the case now.” He tells me he felt there should be more inclusion in music and so just started writing.

“The first CD I ever owned was Guns N’ Roses. My grandma gave it to me for Christmas. I’m still a rocker,” | Photo by Shari Tucker

Gonzo admits he never really had intentions of doing anything with the music professionally as he was still a die-hard rocker, but then the right opportunity came his way. About two years after he began writing children’s songs in the jungle, a friend who worked as a psychologist at the Ann Sullivan Centre for Autistic Children approached him about a music project for the school.

Gonzo touched up the songs he had already written, to fit the scope of this specific project. “I took a ukulele to the school and played a few songs for the kids, just to see how they would react. One of the staff members at the school was so moved by the music that she was crying.” The school board took samples of music that the two friends created, voted, and awarded them the necessary funds to professionally record the CD.

The project is ongoing and although written with autistic kids in mind, the music itself is inclusive and closes a gap in the children’s music industry. Going forward, a collaborative CD is in the works where Panamanian celebrities and artists will perform songs.

“The first CD I ever owned was Guns N’ Roses. My grandma gave it to me for Christmas. I’m still a rocker,” he says, wanting to make sure it’s clear he hasn’t abandoned his love of rock music. Case in point, he knows all the best live music venues in Panama City.

“If you are in Casco Viejo, you’ll want to check out Pina Calavera for an alternative Latin vibe or head to Danilo’s Jazz Club for you guessed it … jazz. If you are in the mood for hard rock, check out Hangar 18 in Panama’s Los Angeles district.”

You can check out Gonzo’s current music works at Gonzalohorna.bandcamp.com.

Relax on a Panama City tour and let us show you why this bustling city and surroundings keep us in awe every day. From walking the famous Panama Canal to encounters with wildlife in the jungle, we cannot get enough of this city’s distinctive, multi-faceted identity, and outstanding natural beauty. And on an Urban Adventure, neither will you!