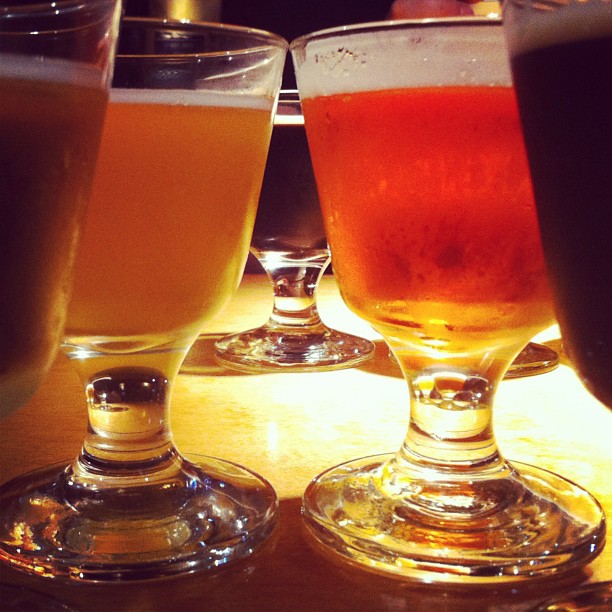 The craft beer industry is booming in Ontario. For a local who knows which bars sell the good stuff, it’s fantastic. But for a visitor to Toronto, it might not be apparent where the good beer is, since the places with the biggest signs, the most advertising, and the loudest bass thumping isn’t where you’ll usually find craft beer. Many people have told me after arriving in Toronto they were unable to find anything but the big brands — the local micros were too under the radar.

To help these poor, lost beer souls, here’s a short list of my picks for Toronto’s best beers and beer pubs, all of them among my favourite places to enjoy a pint. The diversity of styles and the overall quality of Ontario beer today is unmatched. Our brewers are experimenting, blending styles, resurrecting old recipes, and having a whole lot of fun with beer right now. All we have to do is drink the stuff!

Full disclosure: I’ve been coming here for more than a decade and this is the first stop on our “Beer Makes History Better” tour. It’s been around since 1988, and has championed Ontario beer and wine before it was cool to drink local and before we had anywhere near the diversity and quality of beer and wine we do now. Full disclosure, part 2: I live just up the road from Mill Street and the historic Distillery District, and our “Beer Makes History Better” tour finishes here. It’s my “Cheers” — nearly everyone who works there knows my name.

Mill Street is Canada’s most award-winning microbrewery and for good reason; they consistently turn out great product. Though their Organic Lager is their biggest seller (and it’s a solid lager, for sure), I’m a much bigger fan of their seasonals. Their Lemon Tea and Vanilla Porter (both in cans) have made my life even more enjoyable. I often find myself near Bar Hop while shopping for outdoor gear at Mountain Equipment Co-op across the street or meeting up with friends in the Entertainment District. And each time, I rarely pass up the opportunity to pop in for a pint. Their extensive rotating selection of local draft and VERY impressive bottle list takes a lot of flipping (especially to find the food selection on the last page of the menu).

I’ve enjoyed every beer and bite of food I’ve had here, and I suggest asking a server for recommendations. Keep your eyes open for anything from Left Field Brewery, Oast House, Collective Arts Brewing, or Bellwoods Brewery. These are smaller breweries that don’t have their beer in wide distribution, but are often found at Bar Hop! The best part of the ever-changing waterfront is this new brew pub. I love everything about it — except for their tendency to run out of their best beers. Their seasonal “Adventure Brews” are the first to go, sadly. I’m a big fan of their Big Wheel Amber Ale and Boneshaker IPA, and they recently put out a phenomenal ale called “Space Invader” as a seasonal, which I hope they’ll put into regular production. Their radler made with blood oranges this summer was delicious! I wish I lived closer to this bar on the Danforth. The beer selection is superb and the food they serve makes other pub fare look like a waste. Seriously. Check their Facebook page for regular menu updates — with photos! They only have 12 taps, but they make each one count, with a selection of the popular craft beer we all love from Great Lakes Brewery, Beau’s Brewing, and Steam Whistle Brewing, but they often carry new local favourites Like Watermelon Wheat by Kensington Brewing Company and Flight Delay IPA by Barnstormer Brewing. I think it’s time for a return trip!

Other places I really like and have visited on many occasions include Tequila Bookworm, The Only Cafe, House On Parliament, Stout Irish Pub, and Beerbistro.

Feeling thirsty? Check out one of our beer tours around the world!

The 10 Most Romantic Tours in North America
Where to watch Euro 2020 in London
Best beer in Kenya: Tusker
Where to drink beer in Prague: Pilsner Urquell
12 Best City Breaks for TV fans