Blog > What to eat and where to eat it in Vietnam 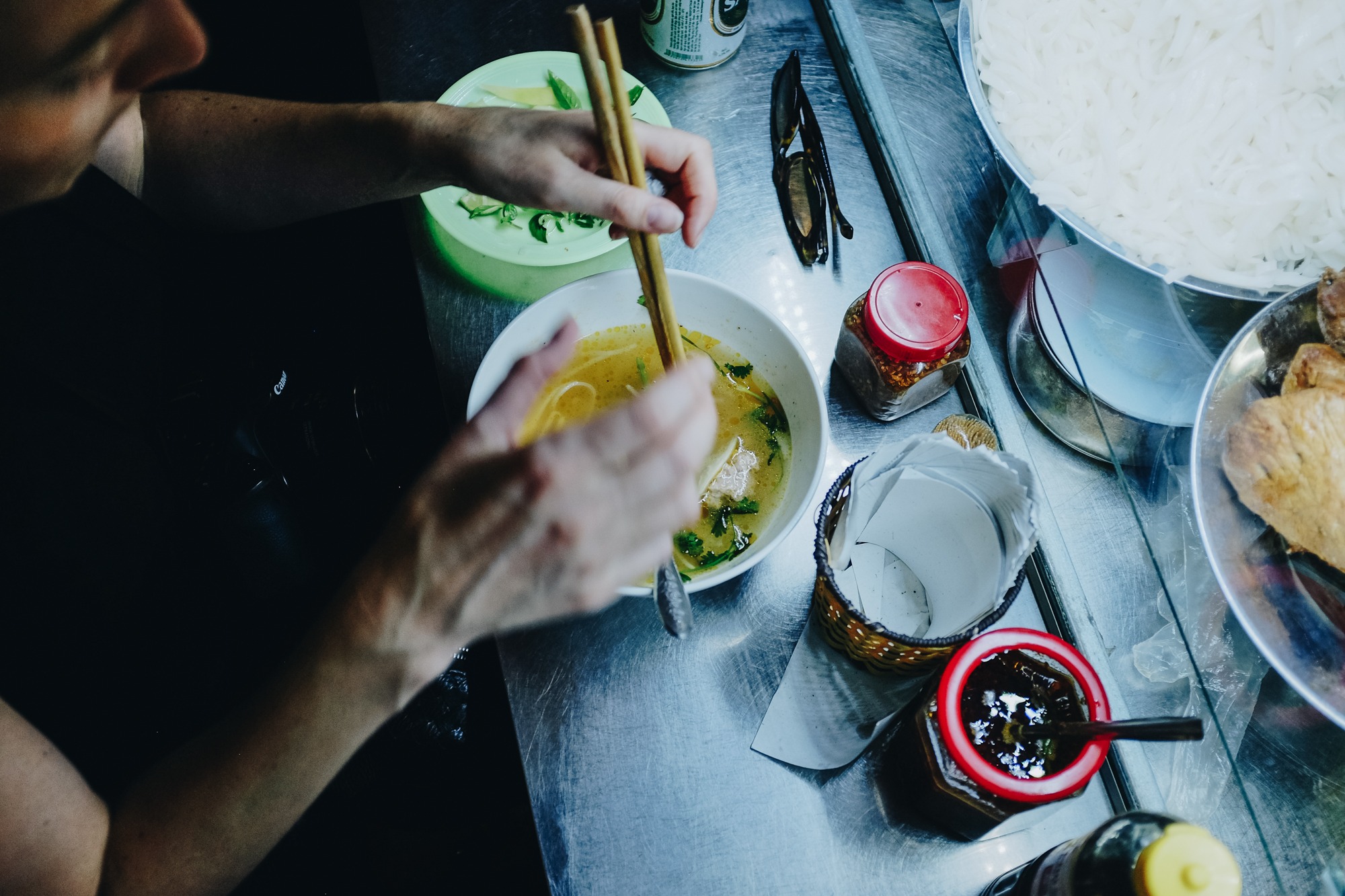 What to eat and where to eat it in Vietnam

My trail of delectable destruction meandered south to north, from Ho Chi Minh to Hanoi, but loitered for a delicious while in Hoi An. It was in this ancient, beautiful, and unassuming settlement that I uncovered some of the most delicious food I’ve ever eaten anywhere in the world, not just Vietnam. And so I should probably let you know now that this list, whilst not Hoi An-exclusive, does feature the town quite heavily. Viva la tasty stuff.

Deliciousness in a bowl | Photo by Oliver Pelling

Cao lau is a Hoi An specialty, which means you should eat it when you’re in Hoi An. More specifically, you should eat it at the Hoi An central market (you’ll know this place pretty well by the end of this article), where it is the best. Thin slices of pork, noodles, and greens all get to know each other in a bowl before a ladle of pork broth/gravy is tenderly spooned over the top. They also throw a handful of flat, fat, fried noodles (or lard) on the dish, which gives the thing some crunch.

I tried to look up information on the origins of Cao lau on the internet, but it all got a bit confusing so I gave up. Some folks think it came from Japan, others think China. Apparently, the water used to cook the noodles comes from a specific well near Hoi An and that’s what gives them their extra-special flavour. To be honest, I didn’t notice whether the noodles were extra-flavoursome or not, but the whole thing was divine. I ate it for breakfast accompanied with a beer Saigon, and so should you.

This place does spring rolls, and it does them very well | Photo by Oliver Pelling

I know spring rolls — the first refuge of the nervous Southeast Asia traveller — don’t seem that exciting, but the ones I ate in Hanoi had me pretty excited. Head to the corner of Hang Dong and Lo Ren streets and you’ll find a place full of locals with a yellow awning (places full of locals with yellow awnings are a dime a dozen, so the street names are important).

Go in, sit down, order the 9,000 VND (50 cents) fresh beer from across the street, and get a plate of spring rolls. There’ll be about 20 of the deep-fried, pork-filled morsels and a veritable rainforest of Vietnamese mint, basil, and lettuce for you to wrap them in. Ask the owner how much they are before you order though — I’ve a feeling the proprietor stooged me somewhat on the bill. I’m willing to forgive him because his spring rolls were sensational.

Who can refuse a pancake-like delight? | Photo by Oliver Pelling

Banh xeo quickly became my new favourite Vietnamese dish. It’s essentially a rice-flour pancake filled with pork, prawn, and beansprouts. It’s served up alongside a whole bunch of Vietnamese mint and basil — like the aforementioned spring rolls — and some rice paper. You tear a chunk off, chuck it in the rice paper, load it with foliage, wrap it up, and submerge it in nuoc cham dipping sauce. Honestly, it’s delicious. And it almost feels healthy.

Banh xeo are a typically southern dish (you’ll find them in Ho An in abundance) so it can be tricky to find them up north. That said, on one of our last nights in Hanoi, we stumbled across a banh xeo street stall owned by a guy who’d moved up from Ho Chi Minh. His chef — an older man who liked to smile — used to make banh xeo back in Ho Chi Minh, too, so they’re the real deal They’d only been open a couple of weeks and said business has been healthy. If the place is there, you’ll find them on the corner of Ma May and Luong Ngoc Quyen streets, in Hanoi’s old quarter.

We promise, egg coffee is not gross | Photo by Oliver Pelling

A Hanoi specialty, egg coffee is made with egg yolk, condensed milk and, of course, coffee. It sounds gross but is not. It tastes like a liquid, espresso-flavoured meringue (I suppose because that’s basically what it is), and is a pretty good way to start any Hanoi day. You can head to Café Giang for a VICE-approved cup, but there are countless outlets serving up this stuff around town. I tried them in three different spots and they all tasted pretty similar — get out there and find your favourite.

Of course, we couldn’t forget the pho | Photo by Oliver Pelling

Anyway. I was about a week into my Vietnam trip and had consumed a bunch of pho. It was all good, but, flavour-wise, barely differed from what I’d get back in Melbourne. I wasn’t losing my mind about it. That was until I went to Hoi An central market on a tip-off. There are a couple dozen identical-looking stalls in the market, but one, if you pay close attention, has a tiny photograph of Anthony Bourdain — the celebrity chef — enjoying a bowl of pho there.

And let me tell you, ladies and gentlemen, that this particular bowl of pho may be the best in existence. It was on a completely new level to any pho I’ve ever eaten before — it didn’t even really taste like pho I’d had before. It was peppery, rich, and there were peanuts and pickled shallots. Man, it was a treat. I’d like to tell you exactly what stall in the market it was — but I think it’ll be more fun if you go and try to find it yourself.

OK, this is where it gets a bit Hoi An-centric. Right outside the central market (you can see it from the aforementioned pho stall) is a small stall called Banh My Phuong, which was the stall featured in Anthony Bourdain’s No Reservations TV show. Such was the popularity of that show that Banh My Phuong blew up overnight and they had to expand. They set up a new shop in the ancient quarter, which is now where most of the tourist traffic is directed. But the original stall is still there and is well worth seeking out. So much incredible food in one place. It’s just not fair.

A quick side note on Hoi An: the ancient town is full of popular restaurants that cater to tourists. They’re all over the guidebooks and all over the internet. I ate at a few of these places whilst I was in Hoi An and yeah, the food was good, but the difference to Vietnamese I could find in Melbourne was barely noticeable. In the central market, however, my mind was blown each time I went back. And all for no more than two or three dollars at a time. Worth keeping in mind.

Easily the coolest bar in town | Photo by Oliver Pelling

OK, this isn’t food. It’s a bar. BUT this is legitimately the coolest bar I’ve ever been to in my life, bar none. Basically, it’s a labyrinthine set-up that spans several floors in the town of Da Lat. It’s like Alice in Wonderland meets the Crystal Maze — hidden staircases, secret ladders, weird faces carved into the wood and the rock, hidden rooms — the place is legitimately insane. You’ll be hard pressed to find the same room twice. My girlfriend and I went for a drink before dinner and had to go back afterwards because it was so much fun.

BBQ is always a good idea | Photo by Oliver Pelling

So, exploring 100 Roofs Café left us pretty hungry. We ducked across the road and found a pretty touristy-looking BBQ place that we assumed would cost us a bomb and would probably suck, but it didn’t do either of those things. The food was cheap, plentiful, and you got to cook it yourself on a mini-BBQ grill the staff bring to your table. Winner winner, barbecue dinner.

I didn’t make it to Hue, nor did I eat bun bo Hue, the town’s spicy beef soup. So if you could head to Hue, buy yourself a bowl and let me know how it was, that’d be great.

Discover the Old Town of Hoi An after the sun has gone down – not only is it the best way to escape the midday heat, it’s also the perfect excuse to dig in to its tasty street food scene!