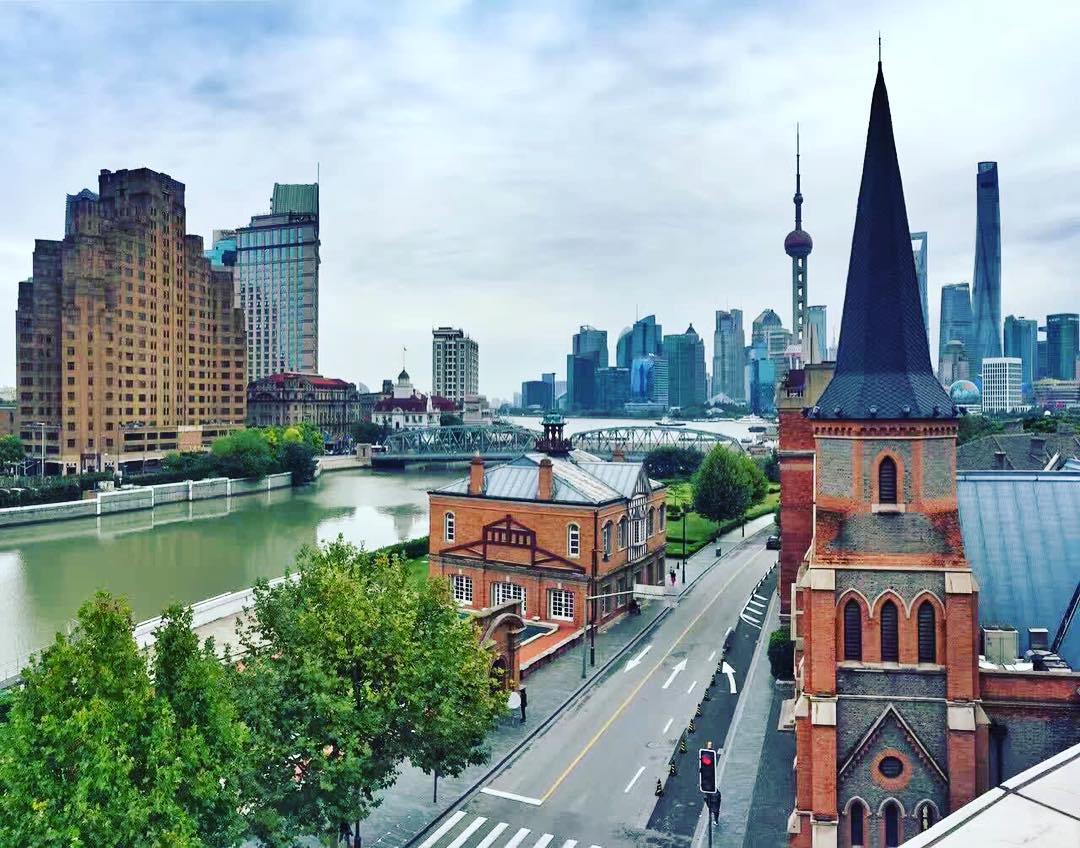 Shanghai is a city you could spend weeks in and still not even scratch the surface of everything there is to see, do and, eat. But that doesn’t mean you shouldn’t experience as much as you can with whatever time you have. If you only have 24 hours, you can still make the most of a short trip to Shanghai by hitting some of the best sights in the city.

Hungry? Start the day with a traditional Chinese breakfast in the bustling Huangpu district. Starting from the city centre of Shanghai in People’s Square, go to the north side toward Tian Jing Street and  Guangxi Bei Lu, an area full of traditional Chinese breakfast options. Take your pick of Chinese crepes stuffed with egg, crispy wontons, delicious bean paste sauce, scallions, and black sesame seeds, Chinese fried dough with soy milk, or xiao long bao (steamed soup dumplings). The street is busy and vibrant in the early morning and makes for a unique way to immerse yourself in local life. The street vendors will wake up around 5am to start preparing for the busy hours that start around 7am. The morning commute for the average Shanghai worker will start with this type of setting.

Walk off some of your breakfast with a visit to YuYuan Garden. Take Metro Line 2 from People’s Square and transfer to Metro Line 10 where you’ll get off at YuYuan Garden Station. YuYuan Garden was first built during the Ming Dynasty and the five-acre complex is comprised of stone arches, rockeries, gardens, sparkling fish ponds, pagodas, sculptures, and pavilions. Note that the gardens can get very crowded on weekends so be prepared if you’re not visiting on a weekday.

Go through the adjacent market bazaar to check out the souvenirs, street snacks, and beautiful traditional architecture of surrounding Old Town.

Next, take Metro Line 10 from YuYuan to Xintiandi. The is a large area comprised of many traditional mid-19th century shikumen (stone gate) houses on narrow alleys, many of which now house restaurants, cafés, and shops.

Enjoy lunch at the famous Din Tai Fung for their high-quality soup dumplings, noodles, steamed buns, and more. The service is always amazing as they pride themselves on this. Din Tai Fung is a Taiwanese chain, but its reputation is shown through great service and consistently good quality food. Lunch hour might be busy on the weekends.

Walk from the Xintiandi area to Fu Xing Park in the Former French Concession (FCC). Exploring both makes for a peaceful walk after lunch at Xintiandi.

Fu Xing park is famous for all the locals practicing tai chi, dancing, and playing mah-jong. The park, like its surrounding area, is also designed in the French style. There is a lake here, as well as fountains, covered pavilions, and flowerbeds. After playing in the park, get a feel of the FCC, where you’ll find leafy streets filled with cozy cafés, galleries, parks, boutiques, bars, and restaurants. You can easily spend a few hours wandering, slipping in and out of various shops, and stopping for a beer or glass of wine in one of the many quaint bars or cafés.

You can then walk all the way down to Shan Xi Nan Lu, to IAMP, a luxurious mall in the centre of the FCC. Feel free to go inside to enjoy the air conditioning, or stop for a quick coffee.

From IAMP, cross the street and visit Liquid Laundry Kitchen & Brew, where, if you’re visiting on a weekday, you can catch the last hour of happy hour (4-7pm, Monday to Friday).  The gastropub, popular among both expats and locals, has an onsite microbrewery and specialises in elevated pub fare, including wood-oven-fired pizzas.

Once you’re full and if you’re in the mood to continue checking out Shanghai’s nightlife, stick to the street you’re already on. Donghu Lu is famous for its clubs such as La Baron and Monkey Champagne, and bars like Shanghai Brewery, or vodka-focused cocktail bar Craft. The area is also full of restaurants to try as well as random street stalls that open later in the evening, should you need a snack.

The best way to get from the airport to the sites is by taking the Shanghai Maglev Train. It gets you to Longyang Road Station in under 10 minutes (note that this is not central Shanghai). From here you’ll need to transfer to Metro Line 2 to Ren Ming Guang Chang, a.k.a. People’s Square, which should take another 20 minutes. The Maglev Train comes every 15-20 minutes and runs between 6:45am and 9:40pm.

If you’re coming in or leaving outside that time you can take a taxi, which should take about one hour or slightly more to the sites, depending on traffic.

If you want to see Shanghai in two hours in the morning or afternoon, head to Wu Kang Lu (Ferguson Lane) in the charming Former French Concession to see the famous Normandie Apartments (now known as the Wukang Mansion) and the other historical buildings in the area. Along the way, leafy trees on both sides will shade your stroll as you discover the beautiful Art Deco-influenced architecture mixed with Chinese-style fruit shops, convenience stores, noodle restaurants, and boutiques. The mix of European and Chinese styles gives Wu Kang Lu a unique look. Enjoy a coffee at Coffee Tree, which has a patio that overlooks Ferguson Lane

If you’re in Shanghai for an evening or nighttime layover, make your way to Nanjing Lu, the famous walking street in Shanghai’s city centre. There are no cars here, but watch out for the occasional scooter or biker that weaves in between pedestrians. The famous Nanjing Walking Street is full of shops, bars and restaurants. Here you can choose to walk straight the whole way down, all the way to the Bund for a view of the Pudong skyline in the east from the Puxi side in the west along the river. The view at night is spectacular (but might be a bit crowded).