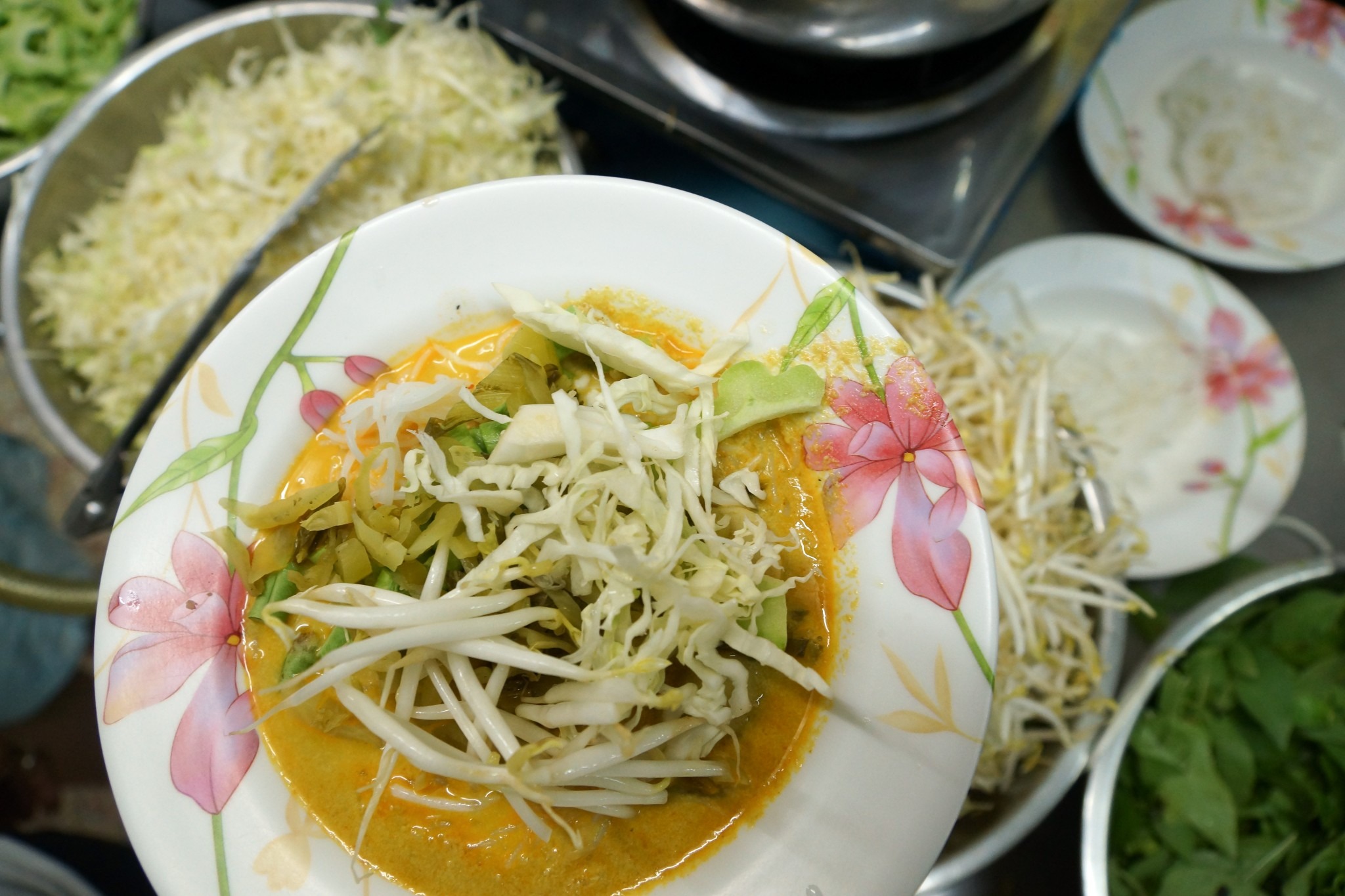 Kanom jeen (also sometimes spelled kanom chin) is a dish that few visitors to Thailand will ever encounter, despite the fact that it’s beloved by Thais across the country. That’s because it’s notoriously difficult to keep fresh and therefore hard for restaurants to prepare in bulk — which means when locals find a good place serving the dish, they come back again and again.

Made from fermented rice noodles, kanom jeen is simultaneously sweet and sour. The rice flour is left overnight in a mixture of water and yeast, fermenting it and giving the noodles a slightly sour tinge. Come morning, the noodles are cooked and then topped with various curries — or even just plain coconut milk. Kanom jeen (or chin) is loved by locals, but few tourists ever try it

At Kanom Jeen Naam Ya, down a tiny alley in Bang Lamphu not far from Khao San Road, owner Pa Puan serves three different kinds of curries: one with coconut milk, another with fish balls and no coconut milk, and another known as nam ngiew, a northern-style pork curry. The flavours are intense and pungent, so it might not suit many travellers’ palates, which are often more used to the sweeter, spicier tastes of Thailand — but it’s worth a taste if you want to try something truly authentic and local. And if you’re going to try a kanom jeen, then Pa Puan’s shop is the place to go.

Pa Puan (‘Pa’ means ‘Auntie’ and is a term of endearment by the locals who frequent her shop) has been in business in this same spot for more than 30 years, and is so popular that it can be hard to find a table (expect to share your table space with hungry strangers). She starts cooking her curries at 5am, opening up for the breakfast rush by 8am, and staying open until her last vats of curry are finished around 6:30pm.

You can mix and match your order, which my Urban Adventures guide, Soon, does when we visit; she opts for the coconut milk broth, but gets a few fish balls from the other curry tossed on top. In front of the pots of curries are self-serve bowls of various toppings: bean sprouts, pickled cabbage, and various herbs. Grab handfuls and mix and season your dish accordingly — and be prepared to taste something unlike any other Thai food you’ve probably had.

How to find it: On the southeast side of Chakrabongse Road between Thanon Tani and Soi Kraisi, down the pedestrian alley beside the Banglumpoo (Bang Lamphu) Tang Huan Seng department store.