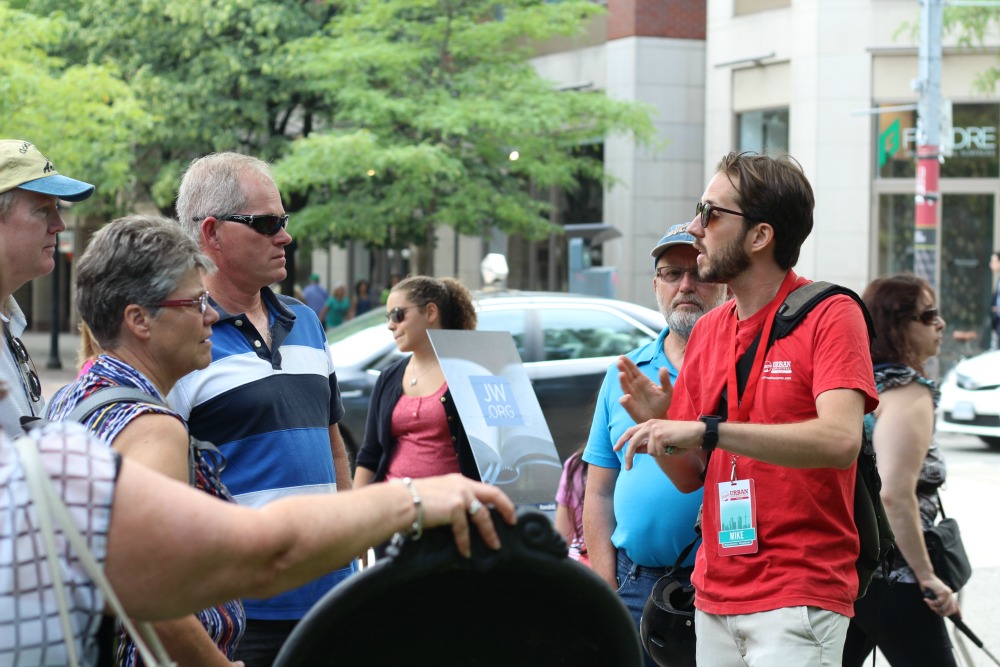 Learn more about our guides around the globe — everything from what makes the perfect day in their city, to how they landed in tourism, to why they love working with Urban Adventures.

Mike doing what he does best: showing travellers the Best. Day. Ever. in Toronto

On how he ended up in Toronto…

This is my second round in Toronto. I originally moved here from Windsor, Ontario, for theatre school back in 2003, but dropped out after the first year and moved back to my hometown. But after spending my early 20s doing odd jobs and going back to school a few times, I was having difficulty clicking with a more traditional line of work. I also goofed off a lot and always dreamed about doing comedy. So, I started taking Second City classes in Detroit and doing amateur stand-up. I was making a small bit of money emceeing gigs around Michigan and Ohio but was getting nervous crossing the border five times a week, telling customs officers I was just “visiting friends.” And with Detroit’s economy, the Second City Detroit training centre had to close and it just seemed like a good time to think about moving.

When I came here, I was pursuing stand-up but I needed a day job, so I started doing tours with a double-decker bus company. I ended up really getting into the history and enjoying the aspects of being a tour guide. But I didn’t really like how I couldn’t connect with the guests. I was looking to move on and a friend started working for Urban Adventures and told me how awesome it was. The company and the idea of walking tours really appealed to me. It seemed like the perfect experience for the guests as well the employee. He recommended me and the rest is history!

On an average day in Toronto…

It’s hard to define an average day in Toronto. Every day is different and has an amazing adventure — it’s all based on what you want to do. For instance, yesterday, I did tours all morning and was watching the first inning of Blue Jays baseball on TV when I got a text from my friend that he had an extra ticket. A $10 cab ride later I found myself live at the game! Earlier this summer, I spent a day on the Toronto islands, laying on the beach, swimming, and kayaking in the harbour. Or on a weekend, I might go golfing, or spend a day at the Art Gallery of Ontario and the evening at a board game café. There is no set routine and although I have been living downtown for eight years, I’m still discovering new experiences and adventures. There is always something new to do!

On stereotypes about Torontonians…

I think the stereotype that the rest of Canada applies to Torontonians is that we can be cold and snobbish. When I first moved here from a smaller city, it seemed that way, but it’s just a different lifestyle in a big city. We are very friendly, especially when it comes to guests. People on my tours are always amazed at how friendly Torontonians are, whether we’re helping people with directions or holding doors open. Another false stereotype is that people think we talk like Terrance and Phillip from South Park, saying things like rooooof (roof) or abooot (about), but we don’t talk like that at all.

Or some people think that it’s always cold here. Although it does get really cold during the winter, our summers can be extremely hot. On the other end, sometimes other Canadians will give us a hard time because they don’t think we know what cold is compared to them, but in Toronto we have a wet cold that really rattles the bones.

A stereotype that is true? People who visit always go on about how everyone they meet in Canada is so nice. Just look at a Canadian scandal: our prime minister accidentally bumped his elbow into an MP on the floor of the House of Commons and profusely apologised about it five times.

I think the thing that people always find surprising about Toronto is how big we actually are. I always remind my guests that we are now the fourth biggest city in North America in terms of population (Mexico, New York, LA, and then us). I tell people that they need about two weeks to get a good feel for Toronto since sometimes people will only give themselves a day or two.

Another thing people find surprising is how diverse we are. We are very multicultural, and in fact 51% of the people who live here were born outside of Canada. Our city’s motto is “Diversity is our strength.”

Don’t plan on driving downtown. The traffic can be very congested, there is always lots of construction, you have to find parking, and once you do, you usually have to pay a lot for it. The best way to get around is to leave your car at your hotel and walk, bike, take public transit, or hail a taxi or Uber. Also, note that a taxi from the airport to the city centre can be around $60. Take our new UP express train; it’s way cheaper and faster, and has wifi the whole way.

Gratuities are important, too. If you go to a bar and you don’t tip your sever after getting a beer, you could be waiting awhile for your next one. Make sure you take care of your wait staff.

On what makes him a great guide…

I try to make my tours as enjoyable and memorable for my guests by getting to know them and connecting with them.

I could recite facts ad nauseam, but making a connection and asking questions to personalise the tour will go a lot further, and as a guide, I get a lot out of it too. I like to ask questions about where they are from, what they do, what their culture is like. I always say that I don’t have the luxury to travel the world, but instead the world comes to me and I learn so much! I have met so many interesting and fascinating people on my tours. I’ve met politicians, doctors, teachers, pastors. I’ve even met a professional bowler, a rocket scientist, and an official rock-paper-scissors referee!

Hang out with Mike or one of our other awesome Toronto guides on a Toronto city tour.

You know a city’s cool when Vogue says it is. The city got a major boost when the fashion mag declared Toronto’s Queen West ‘hood to be one of the coolest neighbourhoods in the world. Ranked as one of the globe’s most multicultural communities, this “city of neighbourhoods” offers up every flavour of international flare you can think of. Explore this cultural diversity and a few of the local hot spots (as well as beer and bacon!) with a Toronto city tour.