Blog > 4 Rio bars that serve history with your beer 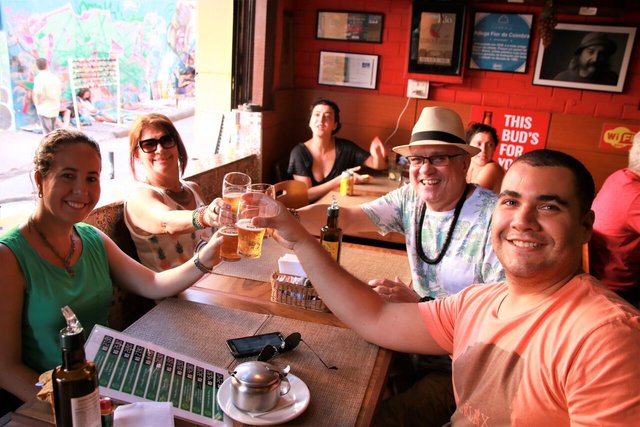 4 Rio bars that serve history with your beer

Like a bit of history with your booze? These bars have all been marked as heritage sites in the city of Rio de Janeiro, which means going for a cocktail comes with a history lesson, too. From rebellions against German businesses during WWII to chapels and ‘chopp’ barrels, each one has a story to tell. Thirsty? Drink up as you soak up some rich Rio heritage.

Founded in 1887 by Jacob Wendling, the son of Swiss immigrants, Bar Luiz maintains the tradition of German cuisine — think sausages, croquettes and sauerkraut. It was the first bar to receive a chopp barrel (‘chopp’ is unpasteurised pilsen beer, typically served in a half pint) in the city of Rio de Janeiro. During WWII, after a ship from Brazil was bombed, students in the city rebelled by pillaging German-themed bars in the city, including Bar Luiz.

Founded in 1938 by the Portuguese José Lourenço who, at the time, sold wine from barrels served in mugs. His chef, Dona Maria, who became his wife some time later, made codfish balls in cigar shapes, patterned on a spoon — and which the bar still serves to this day. Besides the fish balls, the other specialties at Adega Flor de Coimbra are codfish served different ways, as well as sardines.

Founded in 1907 by a couple of Austrians. The bar was originally called Bar Zeppelin; however, during WWII, students ravaged the place and its owners had to hide for 110 days in their apartment above the bar — and changed the name from Zeppelin to Bar Brasil. The specialty here is the chopp and German food such as sausages and kassler (salted and slightly smoked pork).

Founded in 1903 by Portuguese and Spanish immigrants, Bar Nova Capela was originally just named Capela (‘chapel’), because there was a chapel on the land before the bar opened. In the 1930s, the bar moved addresses and was, naturally, renamed as Bar Nova Capela (‘new chapel’). Get the lamb, or the codfish balls, which are considered the best of the city.

Oh, Rio. How we adore thee. If you haven’t caught the Rio de Janeiro bug yet, you need to tour Rio with Urban Adventures to discover what it is that draws travellers into this Brazilian gem time and time again. Plus, when you explore this city with a local, you’ll see it from a fresh perspective away from the tourist traps.

What lockdown has been like in Havana
Lonely Planet Best in Travel 2020: What not to miss according to locals
The 10 Most Romantic Tours in North America
Where to watch Euro 2020 in London
Best Street Food in Havana: Coco Glasé in Plaza Vieja